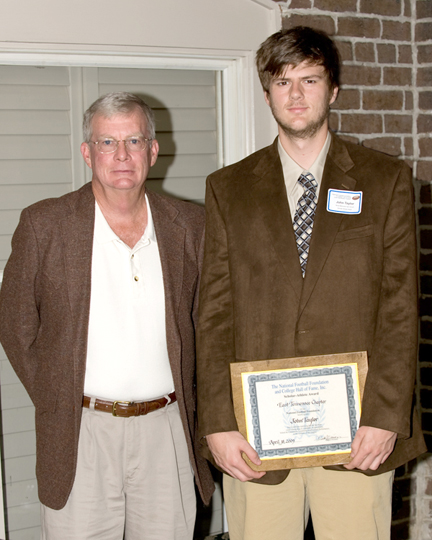 Stone Memorial senior John Taylor was honored as a football scholar athlete at the East Tennessee Chapter of the National Football Foundation and Hall of Fame Banquet Saturday morning at the Foundry. He is joined by his father, Vic. 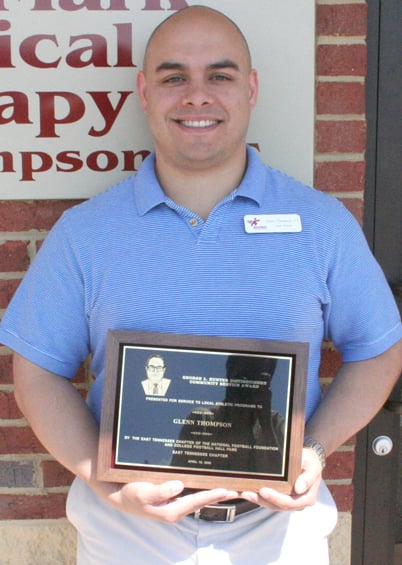 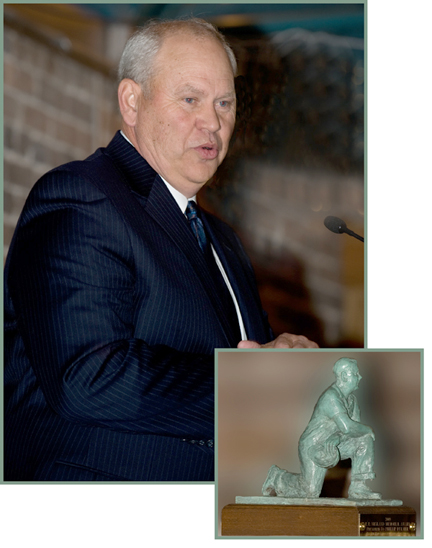 Stone Memorial senior John Taylor was honored as a football scholar athlete at the East Tennessee Chapter of the National Football Foundation and Hall of Fame Banquet Saturday morning at the Foundry. He is joined by his father, Vic.

This past Saturday morning, the East Tennessee Chapter of the National Football Foundation and Hall of Fame held their annual awards brunch at the Foundry in Knoxville. The Knoxville Quarterback Club has used this brunch since 1967 to award the Robert R. Neyland Award to an outstanding man who has contributed greatly to the intercollegiate athletics. Past recipients of this prestigious honor includes Bud Wilkerson, Darrell Royal, Ara Parseghian, Vince Dooley, Bobby Bowden, Lou Holtz, Johnny Majors and a host of other legends of college football. Joining their ranks this year was former UT Coach Philip Fulmer. Fulmer was selected based on his body of work at Tennessee over the 17 years he led the program, posting 152 wins against only 52 defeats. His winning percentage, an astounding 74-plus percent, is a feat that no other active coach in Division IA, who has coached at least a decade has been unable to match. His coaching career was highlighted by a perfect 13-0 season and the 1998 BCS national championship. In his acceptance speech, Fulmer related how he was proud to be a Vol and that he still had the desire to someday coach again, saying that "coaching is a special opportunity, a gift from the Heavens." On hand to make the presentation was the son of General Robert R. Neyland, Robert R. Neyland Jr. Two of Crossville's own were honored at this year's brunch. Glenn Thompson was honored for volunteer service to Stone Memorial High School by lending his physical therapy skills free of charge in addition to attending all football practices, football games, basketball games and wrestling matches to provide athletic training for the students. He was our of four recipients of the George L. Hunter Distinguished Community Service Award by the East Tennessee Chapter. Thompson is a licensed physical therapist with Benchmark and is a 1994 CCHS graduate who makes his home in Crossville with his wife Olana. Stone Memorial's John Taylor was among 32 high school scholar athletes recognized by the East Tennessee Chapter, who have achieved success in the sport of football and in the classroom. In addition, these athletes have been contributors and role models in the community by what they do off the field. John's work in the classroom has resulted in a 3.70 GPA. He is the son of Vic and Marjie Taylor. Other award recipients at the brunch included Haywood Harris, currently serving as executive assistant to the athletic director at UT, who was awarded this year's Distinguished American Award. Coaches Bob Black, Mark Pemberton, Gary Rankin and SEC football official Rocky Goode were honored for their contributions to amateur football in east Tennessee. Tennessee head football Coach Lane Kiffin made a brier appearance to congratulate Phillip Fulmer and address those in attendance. Besides family and friends, many former players were also on hand to support their former coach on this special day.

On Sunday, Oct. 25, 2020, Jerry Lewis Johnston, loving father of four children, passed away at the age of 83. Jerry was born in the Homesteads community of Crossville, TN, to Omil and Ada Ruth Johnston. He was a veteran of the United States Air Force. He received his electrical engineering d…

Ronald Herman Polston, 76, of Crossville, passed away Tuesday, Oct. 26, 2020, at Cumberland Medical Center in Crossville. He was born March 25, 1944, in Lakeland, FL, son of the late Herman Polston and Pearl (Gentry) Polston. Ronald worked hard all his life as a farmer to provide for his fam…