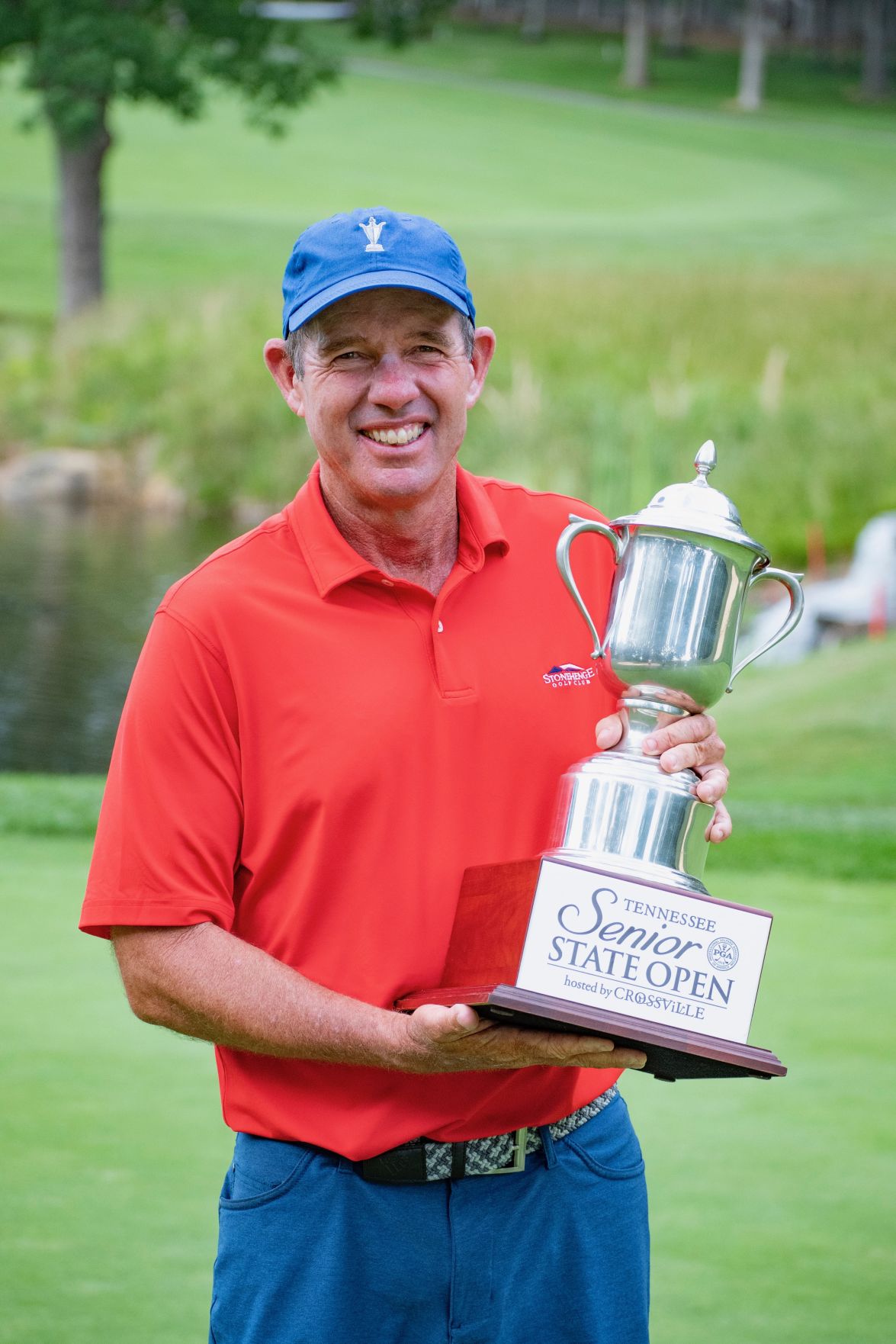 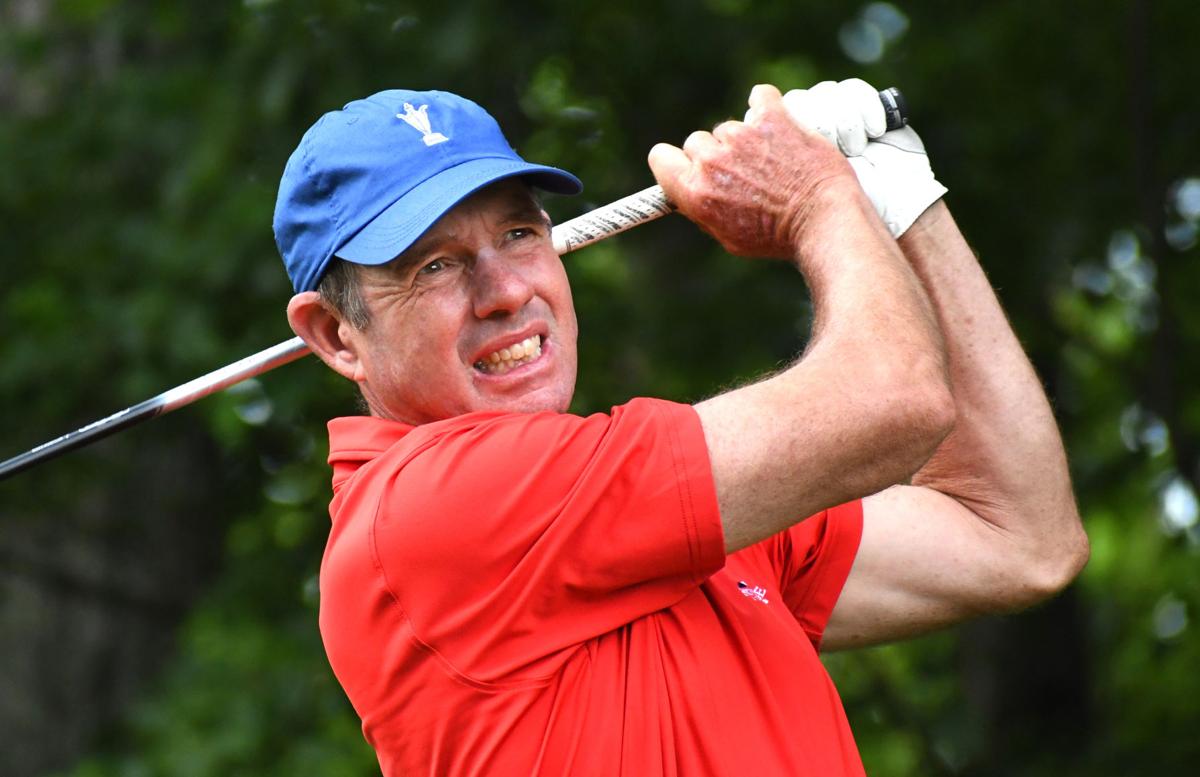 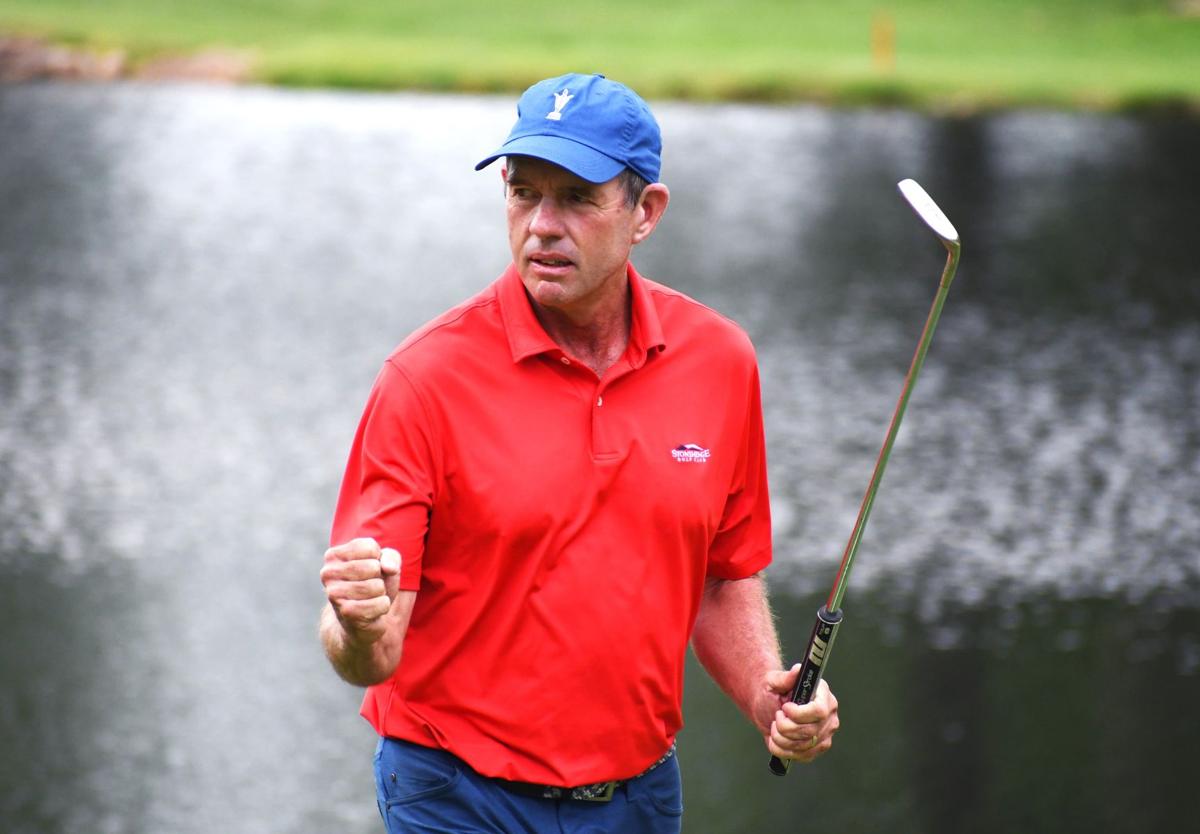 Golf has given a lot to Bill Breen, PGA.

And at this point in his playing career, the 58-year-old Nashville native is learning to appreciate every moment of it.

This week at Stonehenge Golf Club provided him with another significant achievement. With his wife Hannah caddying for him, Breen opened the 2020 Tennessee Senior Open with a personal best round at the course and let that propel him to a convincing victory for his third tournament title.

Breen fired a 6-under, 66 on Monday and followed that up with an even-par round on Tuesday to finish four strokes ahead of Cliff Kresge (Kingsport) and another three-time winner of the championship, Gibby Gilbert (Ooltewah).

“It’s always fun to win,” said Breen, standing on the 18th green after receiving the championship trophy which already has his name engraved on it from 2013 and 2016.

“We don’t get to win near as much as we would like. This game is very humbling. (Every victory) is sweet. The last one is sweeter than the others, but to win again after shooting 66 … that was a lot of fun.”

Making the victory extra special for Breen was doing it with his wife by his side.

The couple shares a special bond through the game of golf. Back in 2012, Hannah was on the website Groupon and purchased a golf lesson with Breen, who teaches at Harpeth Valley Golf Center in Nashville. Three years later, Breen asked her out on a date and another year-and-a-half after that they got married on the Harpeth Valley driving range.

“She is a great supporter,” Breen said. “She is an encourager of what I do – play golf and teach golf.”

“As a caddie, she is very positive. She is focused and gives me nothing but great advice.”

There wasn’t much advice to give Breen as he played the final few holes of Tuesday’s final round.

He entered the day with a two-stroke lead over Jared Melson (Tullahoma) and three strokes over Steve Golliher (Powell), and the margin remained the same among the three as they made the turn. That’s when things went awry for the two chasing Breen as both Melson and Golliher double-bogeyed the par-five, 10th.

The two continued to fall off the pace on the home stretch, allowing PGA Champions Tour players Kresge and Gilbert to work their way into a runner-up finish.

For Breen, though, the strategy was “fairways and green” coming home. He birdied No. 12 to get to seven-under on his round at one point.

A bogey on 17 dropped him back to even-par on the day, but at that point, the victory was firmly within his grasp.

“I was in control of my destiny and hit solid shots and didn’t make any mistakes,” Breen said.  “You always have to know where you stand on the leaderboard and I knew I had a few strokes to deal with. I just wanted to hit fairways and the middle of the greens. If the putt goes in, great, but don’t make any big mistakes.”

Breen came into the final round riding a wave of momentum following an opening-round 66 that featured seven birdies to just one bogey.  He said it was the lowest round he had ever shot at Stonehenge.

“Obviously when you only have 26 putts, you are going to make some birdies,” he noted. “But I hit the ball really well. It was a lot of fun.”

Kresge opened the tournament with a 73 and fired the low score of the final round with a three-under, 69.  Gilbert went 69-73 to also finish with a 142 total.

Harry Hill of Chattanooga walked away the winner of the Super Senior Division with a two-round score of 144. Buzz Fly of Memphis was the top-finishing amateur as his 74-70 card was good enough for fourth place.  Melson (68-77-145) rounded out the top five in the Championship Division.

For Breen, the victory came after a recent bit of disappointing news when the 2020 KitchenAid Senior PGA Championship was canceled due to the COVID-19 pandemic.

Breen had qualified for the tournament for the first time in his career after finishing 12th out of 264 players in the Senior PGA Professional last year.

Breen has experience in prestigious national events.  He has played in the U.S. Senior Open twice (2014 and 2018) and also qualified for the 2018 British Senior Open, which was played at The Old Course at St. Andrews.

The TGA also showed its appreciation for the Senior Open’s host and sponsors.

This event would not have been possible if it was not for the support of the city of Crossville. They have been the title sponsor for this event since its inception back in 2010.

Their support has allowed the event to grow and become a must-play for all of the top senior golfers in the state of Tennessee.

Crossville is known as the Golf Capital of Tennessee because of its love for the game that helps bring people to the beautiful city to experience the many golfing opportunities that they have.

Graveside services for Lance Reed Holland, 49, of the Bloomington Springs community, were held on Wednesday, July 15, at noon at the Stallion/Stalliongs Family Cemetery. Mr. Holland passed away on Thursday, July 9, 2020, at his residence. Lance was of the Baptist faith. He worked in the auto…

Lula Mae Rice, 88, of Smith Chapel, TN, passed away on Friday, July 10, 2020, at the Cookeville Regional Medical Center. She was born in Pleasant Hill and was a homemaker. Funeral services will be held on Tuesday, July 14, at 4 p.m. at the Smith Chapel Freewill Baptist Church in Sparta. Buri…