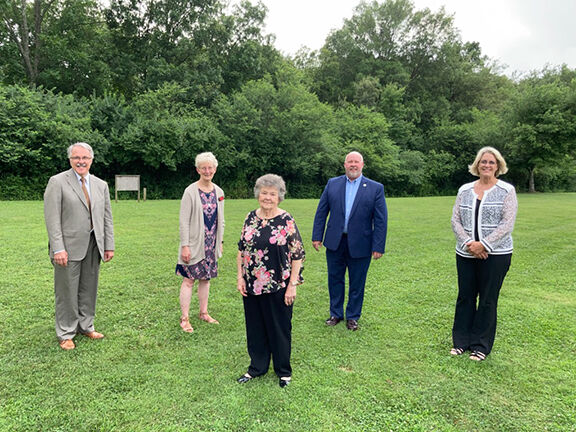 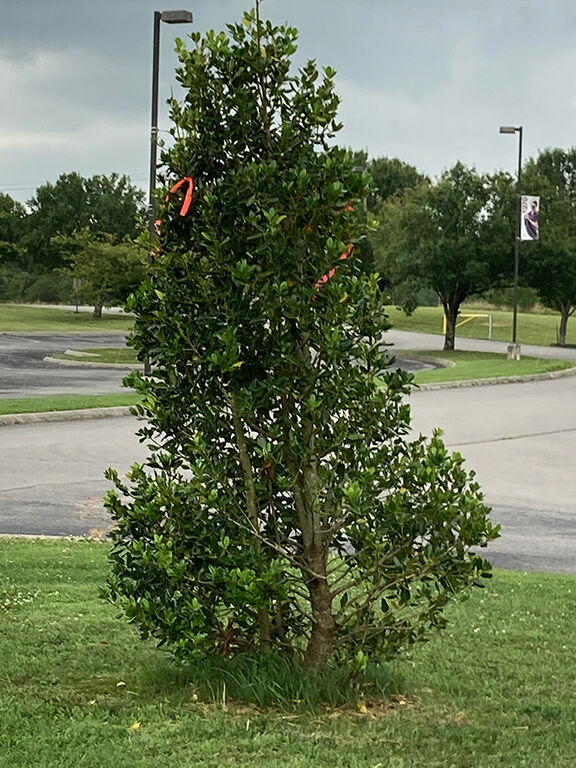 Dr. Carl Mueller worked as a chemical engineer for the Department of Defense for many years. Upon retiring to Crossville in October 1998, his twin passions became the church he and his wife joined and helping develop small businesses.

Mueller passed away in January, but his spirit was alive during a ceremony Monday afternoon dedicating a tree planted in his honor. Just as Mueller helped grow faith and commerce, the sudden shower that showed up Tuesday and sent guests scurrying indoors nurtured the holly tree that symbolizes his legacy of giving back to the local community.

The tree dedication took place at the Cumberland County campus of Roane State Community College in Crossville. The tree was planted in April on Arbor Day. Located a short distance away is the Cumberland Business Incubator, a place where entrepreneurs go to talk shop and get support and ideas for starting small businesses. They owe a debt of gratitude to Mueller, the driving force behind the Incubator.

Guests at the July 12 dedication included Mueller’s widow, the pastor from his church, a former elected official and college administrators. Several spoke before the rain cut short the proceedings. They recalled a man who made a lasting impact on the local community and its people.

“He was such a blessing in my life,” said Warren K. Burns, pastor at Trinity Tabernacle Assembly of God in Crossville. “He was a tireless encourager who was always investing in kids’ programs. He always wanted to enable others. Carl also served as a credentialed minister with the Church of God and helped ministers with their organization, structure and finances.”

Also speaking at the dedication was former Crossville mayor and city council member J.H. Graham III. He recalled meeting Mueller at Trinity Tabernacle after addressing the congregation in 2005.

“He asked me what I was going to do for small businesses,” Graham said.

That meeting led to the beginning of a “wonderful, wonderful process” in which the Incubator, financed in part through an $880,000 grant and $500,000 from the city and county, went through the planning and fundraising phase, the latter which included a trip to Washington, D.C., to collect a $50,000 payment from Anne Pope, then federal co-chair of the Appalachian Regional Commission.

In the spring of 2010, ground was broken on the $1.9 million project. A little more than a year later, the Incubator “hatched.”

Remarked Graham: “If it wasn’t for Carl Mueller, the building behind us wouldn’t be here.”

Holly Hanson, director of CBI, told the gathering Mueller was integral to the Incubator’s mission of helping entrepreneurs.

“He was always excited to talk to entrepreneurs and attend yearly open houses,” said Hanson, noting that Mueller served as bio technical advisor for the Incubator, which is operated by Roane State. “He was a key part of the marketing effort.”

Before coming to Crossville, Mueller worked for the Department of Navy in Maryland and Washington, D.C. Much of his time was spent working in a lab and researching and developing weapons for the Navy. He did work in other areas, however, serving as a director of small businesses.

Mueller died from COVID-19 complications, leaving behind his wife of 34 years, Jenell.

She said the Incubator was his baby and he really enjoyed working with all these people and being involved with the city and county.

“I’m in awe of the things said today,” said Jenell, speaking inside the school cafeteria. “I’m very happy and proud. I feel it was very well deserved. I’m so happy they recognized him and his ability. He was such a loving and caring man, an amazing husband.

“We had a great and wonderful life.”