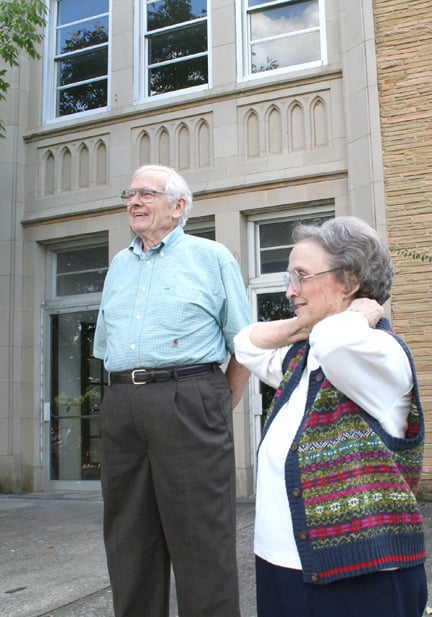 John and mary Jo Rose, brother and sister, came to see their old school building to see its condition. John graduated in 1943 and Mary Jo in 1948. 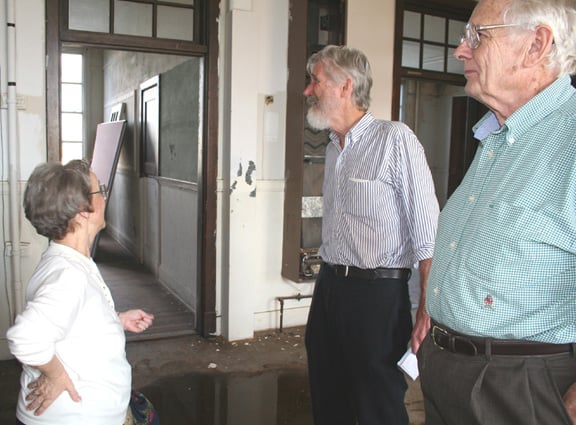 From left, Mary Jo Rose, Howard Stubbs and John L. Rose were with several people who toured the old Cumberland High School building Wednesday evening. The Roses both live out of town. Stubbs, who currently teaches at the Alternative School, was a close family friend of the Roses.

John and mary Jo Rose, brother and sister, came to see their old school building to see its condition. John graduated in 1943 and Mary Jo in 1948.

From left, Mary Jo Rose, Howard Stubbs and John L. Rose were with several people who toured the old Cumberland High School building Wednesday evening. The Roses both live out of town. Stubbs, who currently teaches at the Alternative School, was a close family friend of the Roses.

John Rose fondly remembers his high school, but after touring through the 1929 facility Wednesday evening, the tall, gray haired retired man doesn't see how it could be saved. "Oh sure, I have lots of memories, good memories of being here. That's why I came here — I wanted to see it at least one more time," said John Rose. Rose, who now lives in Chattanooga, came to Crossville Wednesday with his son, wife and sister, Martha Jo Rose, who lives in Knoxville. "She told me about what was happening with the old building and said we ought to go and see it," he said. Rose graduated from the Cumberland High School in 1943; his sister, Martha Jo, graduated in 1948. Both, like several members of the community, have a different viewpoint on what should be done with the now dilapidated, abandoned structure. The group were some of several county commissioners and members of the public who toured the building in order to see its condition. Shortly after looking into what was once his father's office, John Rose said, "My dad was the principal here at this school and I remember going in there to talk to him all the time. He later became superintendent of the school system here. It's been a long time since I was in here." Rose said as much as he loves the old building, saving it would be difficult. "I can't see them saving it or coming up with the $2 million to repair it ... I can't even think of a group that could come up with that kind of money, or what they would use it for even if it was fixed. Maybe a museum, but I'm afraid it's probably too late," Rose said. His sister, Martha Jo, feels otherwise. "I came here because I was curious and wanted to see it. I think it's worth saving. It never should have gotten this bad, though. It's a shame it's been let go for so long," Martha Jo Rose said. Many members of the public came and viewed the building and in spite of the building's condition, feel it should be saved. Upon entering the facility, people who toured the building Wednesday evening were greeted with a cold, damp gust of air filled with a musty odor created from years of mold and mildew build-up from years of neglect and a leaking roof. Puddles filled various hallways and areas. Several dead birds were in the building as well as bird droppings, dilapidated, peeling plaster, crumbled wood and garbage. In one room an old wheelchair sits among the debris and decay as the result of years of neglect. Several people questioned why Cumberland County commissioners in the early 1990s accepted insurance money under the guise of repairing the storm-damaged roof, but instead placed the money into the county's general fund and never performed the repair work. "I don't know why it was never done ... We didn't have the votes to get it done. Back then it would have only taken nine votes. Now it would take at least ten," said 2nd District County Commissioner Nancy Hyder. Hyder, who was a member of the county commission in the early '90s, is one of 18 current county commissioners who will eventually decide the fate of the old Cumberland High School. The Justice Center, which sits behind the school, is in need of expansion and the old high school facility stands on the hill next to it, decaying. "Sure I have a lot of personal sentiment and memories here, but realistically I can't see them saving it. Now if I were Bill Gates or Ted Turner I'd just give them money and say here, fix it ... this is probably the last time I'll see it, though," Rose said. Steve Hewlett of Hewlett-Spencer, the firm hired to oversee the Cumberland County Jail expansion project, said he would have a firm dollar figure on what including the old high school in a design plan would cost. On Monday he revealed to commissioners on the building and grounds committee an estimate of $2.6 million to $3.2 million dollars in order to include the facility into the design of the expanded Justice Center. Kim Chamberlin, architect of Upland Design Group, said nothing has been put into writing yet on that estimate. Hewlett previously told commissioners a ballpark budget figure for expanding the jail and the Justice Center would be in the range of $15 million dollars and said that only adding a 96-bed pod addition to the jail would cost an estimated $6 million. Those figures do not include either incorporating the old high school, or the site preparation of the old high school land. "I think they ought to save it and include as part of the plan," Martha Jo Rose said. Talks over the Justice Center expansion and old high school will resume later during future buildings and grounds committee meetings. Some members of the public plan on letting their voices on the matter be heard. "It's one of the last few, old county buildings that can be saved. Why pay over a million dollars to tear it down. It needs to be saved," said Kenny Keck.

William "Bill" J. Hess, 87, of Crossville, passed away on June 11, 2021, at Life Care Center of Crossville. He was born on June 3, 1934, in Middletown, NY, son of George E. Hess and Pauline E. Hess. Bill graduated from Orange County Community College, Harpur College, the University of Washin…

Rickie Nile Burgess, 67, of Crossville, passed away June 16, 2021, at Cookeville Regional Medical Center in Cookeville. He was born Jan. 24, 1954, in Crossville, TN, son of Earl Dee Burgess and Bettie Lou Burgess. Rickie was a Merchant Seaman and of the Christian Faith. He is survived by his…