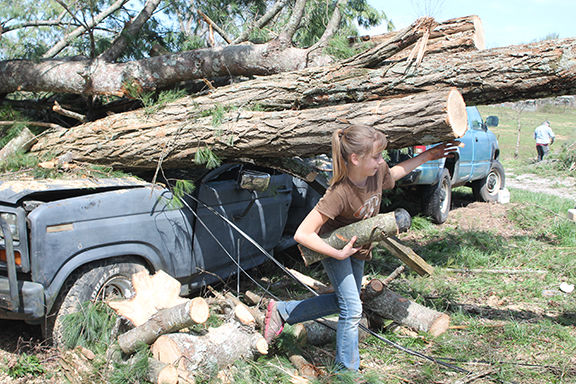 Family members like Rebecca pitched in to help Daniel Ostrander begin the cleanup process after trees were downed by high winds off Glade Creek Rd. 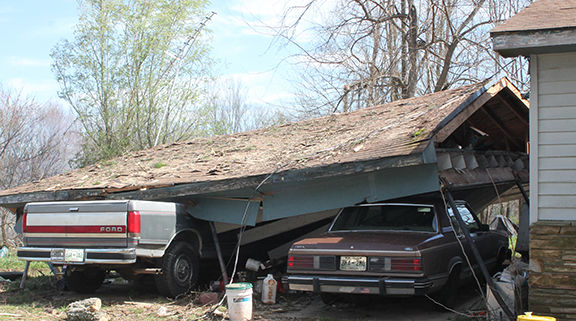 High winds ripped this carport from the side of Daniel Ostrander’s home, crashing down on two of his vehicles. 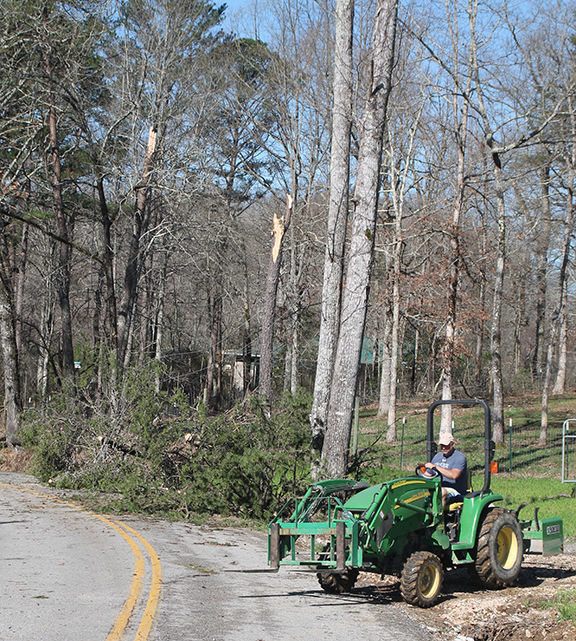 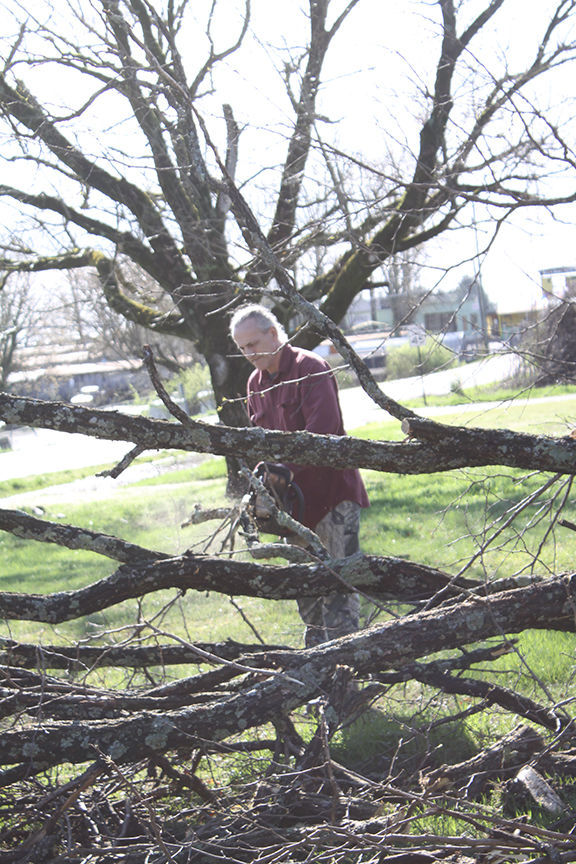 Nile Geldart gets started on storm cleanup on Eureka Dr. off Hwy. 70 N. 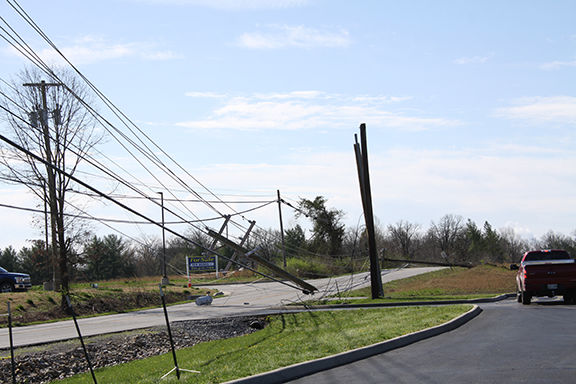 VEC reported approximately 60 poles were down and damaged by Sunday morning’s storms.

Family members like Rebecca pitched in to help Daniel Ostrander begin the cleanup process after trees were downed by high winds off Glade Creek Rd.

High winds ripped this carport from the side of Daniel Ostrander’s home, crashing down on two of his vehicles.

Nile Geldart gets started on storm cleanup on Eureka Dr. off Hwy. 70 N.

VEC reported approximately 60 poles were down and damaged by Sunday morning’s storms.

A team from the National Weather Service is scheduled to visit storm ravaged areas of Cumberland County to access just what suddenly struck the area, from Bon De Croft Mountain in White County to Crossville.

Williams said 15 homes had significant damage Monday morning, but he figured there would be more.

There was one known injury — a head injury suffered by Junior Neeley who was treated at Cumberland Medical Center’s emergency room after a tree fell into the camper occupied by Junior and wife, Barb.

That incident occurred at the couple’s campsite in Deer Run located off Peavine Rd.

Tony Whittenburg had just gotten up from bed, according to a family member, when the storm passed over, ripping the metal roof from his home located off U.S. 70 W., just west of Pleasant Hill.

Neither Whittenburg nor his wife were injured, but the home was seriously damaged and contents may be a total loss.

Daniel Ostrander was in his Glade Creek Rd. home when the storm slammed into his home, ripping the carport off the side of the house and slamming it down on his pickup truck and his car.

“I didn’t have a warning because I didn’t look at my phone,” Ostrander said. “When I checked it later there were some warnings that had been sent.” Ostrander added that when he went to bed, he was led to believe the storm would be serious but not as bad as it turned out to be.

A pickup truck in the yard was flattened by large trees that were toppled over and crushed it. Family members rallied Sunday morning to assist with the clean up, which will probably take days.

At a Mitzkan facility on Walker St. near Tri-County Equipment, a gust of wind rolled over an empty truck trailer that fell into two storage units. Nearby, a large tree fell on the roof of a Crossville Housing Authority apartment.

A truck trailer in the parking lot of Pomona Methodist Church was toppled over by the wind and had to be uprighted Sunday. That incident occurred at the intersection of POW Camp Rd. and U.S. 70 W.

Crossville meteorologist Steve Norris reported a line of severe storms rolled across Cumberland County around 2:45 a.m. Sunday, winds gusted to 63 mph at the Crossville Airport, and there was wind damage in many areas across the county especially to the west and north of Crossville with damage occurring on the north side of town.

“This storm did something unusual, and it seems you cannot depend on the things that you used to. For much of my weather career, if a system wasn't producing severe weather in Middle Tennessee we pretty much knew we were safe on the plateau. Sunday morning there had not been a tornado in Tennessee in 3 hours but as the storm moved over Sparta we saw rotation develop and move into Cumberland County, purple even showed up on the radar which is unusual as the storm approached Crossville. The plateau just does not seem to be our protector anymore which makes you realize even more that when severe weather threatens you really have to keep up-to-date and be prepared to take shelter in your safe spot,” Norris sent in an e-mail to the Crossville Chronicle.

Volunteer Energy Cooperative reported on its Facebook page it had more than 11,000 outages in its service area, with 6,800 of those in Cumberland County as of Sunday, March 29, morning. VEC reported it had brought in 20 line crews and right-of-way crews from several areas to assist in repairs. VEC officials reported multiple, entire distribution circuits were affected and were out of power. Other circuits have isolated damage due to broken poles and downed lines. They reported approximately 60 poles were down and damaged.

As of Monday morning, VEC reported, “There are also numerous homes out in the Pleasant Hill area, in Crossville, and Monterey. Crews have worked around the clock over night, and will continue working throughout the day. Many of the outages on the Plateau are the result of the most significant damage and will take additional time to repair. We expect most of the remaining outages to be restored by this afternoon.”

VEC reminded customers their outage system is not connected to Facebook, and they cannot manually enter outage information if posted on Facebook. Outage information has to be initiated by calling a VEC service center or through submission on the smarthub mobile app.