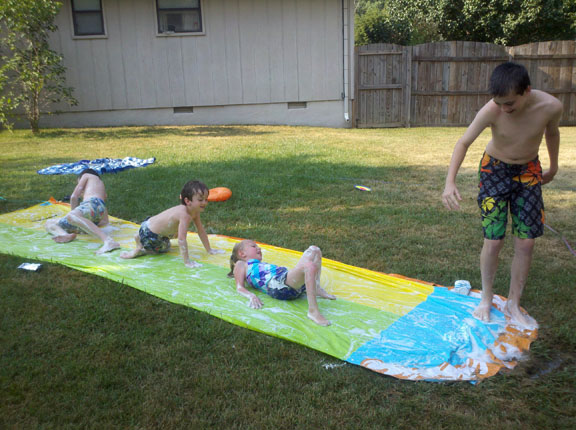 Timmy Withrow, Kattie Hammons and C.J. Withrow try to beat the heat this past weekend, playing with water toys as temperatures soared above 100 degrees. 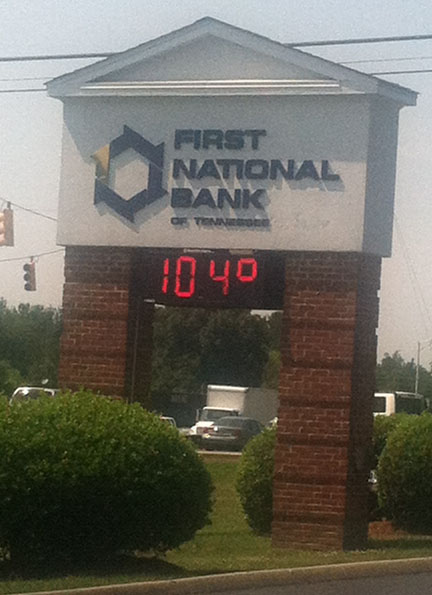 A new high temperature record was set Friday afternoon, with the National Weather Service reporting a high of 102 degrees, though other temperature gauges reached even higher. The previous record for June 29 was 92 degrees, set in 1988. The NWS notes its data is preliminary at this time.

Timmy Withrow, Kattie Hammons and C.J. Withrow try to beat the heat this past weekend, playing with water toys as temperatures soared above 100 degrees.

A new high temperature record was set Friday afternoon, with the National Weather Service reporting a high of 102 degrees, though other temperature gauges reached even higher. The previous record for June 29 was 92 degrees, set in 1988. The NWS notes its data is preliminary at this time.

Cumberland County Fire Chief and EMS Director Jeff Dodson said Monday, "No fires are burning out of control at this time in Cumberland County. There may be some snags and stumps that will burn for days in some areas, but all fires have been contained."

Since June 19, Dodson said county fire personnel have been called to about 10 forest fires as well as four structure fires. Some of those forest fires may have been intentionally set, Dodson said, and a series of seven fires in the Browntown Rd. area Sunday are under investigation.

"They were able to get on a lot of those pretty quickly and get them contained," he said. "If people are burning and the fire gets away from them, they'll call for help and we've been able to get on scene and get those taken care of."

A fire last week on the Cumberland-White county line spread into Cumberland County in the Thomas Springs area, consuming as much as 80 acres, Dodson said. That fire was contained Friday evening.

The Tennessee Department of Agriculture Division of Forestry has asked the public to refrain from debris burning until significant precipitation is received and avoid other activities that could cause fire. There are currently no bans on outdoor burning in Cumberland County, and Dodson said the department didn't plan to take action regarding fire works with the upcoming Fourth of July holiday.

"People just need to be extra cautious when shooting fireworks," he said. "With the grass as dry as it is, it will just magnify problems. We want people to enjoy the Fourth but just to use common sense and be extra careful.

"And, if they do have a problem, they need to immediately call for help."

Call 9-1-1 to report a fire. Dodson said it was best to call immediately so that firefighters could respond quickly to extinguish or contain a fire before it got out of control.

Also, the city of Crossville will hold a public fireworks display beginning at dark.

Those high temperatures are also a health concern, with heat exhaustion and heat stroke, a life-threatening condition, possible.

Sunday, a Cumberland County firefighter was transported from the scene of a fire on Clifty River Rd. to Cumberland Medical Center after he collapsed at the scene with symptoms of a heat-related illness. He was treated and released and doing well, the fire department said.

Cumberland Medical Center reported four patients had been treated with heat-related illnesses from June 28 through July 1, with one patient each day.

Dr. Barry Wagner, president and CEO, reminds everyone to take precautions during periods of high heat, including staying out of the heat, drinking lots of water to stay hydrated and to never leave a child or animal in a car. Also, the young and the elderly are most susceptible to heat-related illnesses, so he encouraged everyone to check on their friends and neighbors to make sure they were faring well during the heat wave.

Temperatures are expected to be lower this week, with highs in the upper 80s, and the forecast calls for isolated and scattered thunderstorms through Friday. Chances of rain are at 30 to 40 percent each day.

Robert Eugene Music, 66, of Crossville, passed away on Friday, April 3, 2020, at the Cumberland Medical Center. He was a farmer. A private graveside service will be held at a later date. Robert is survived by his wife, Betty (Johnson) Music; son, Dalton Music; grandchildren, Aleia Music, Jac…

Earl Glenn Haverdink, 77, was born on Feb. 5, 1943, to Henry and Edna Menkin Haverdink in Holand, MI, and passed away on April 1, 2020, in Fairfield Glade. He worked for General Motors and is survived by his wife, Carol Haverdink; children and numerous grandchildren and great-grandchildren. …

F. "Maezelle" Dixon, 79, of Crossville, passed away peacefully at her home with her family by her side on Saturday, April 4, 2020. She was born April 11, 1940, in Overton County, daughter of the late Virgil Carter and Gladys Masters Carter. Maezelle worked for many years at Flowers Bakery in…