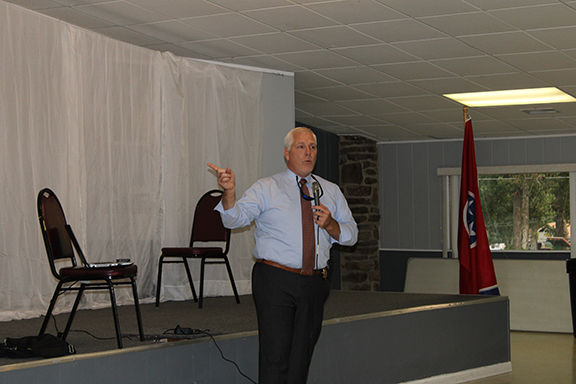 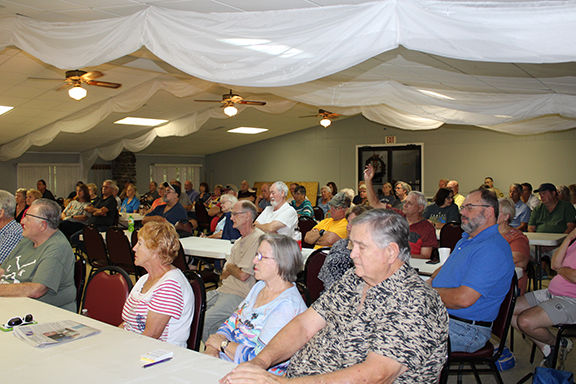 Lake Tansi Neighborhood Watch hosted a town hall meeting at the Thunderbird Recreation Center on Sept. 12, inviting Cumberland County Sheriff Casey Cox to present an update on local law enforcement, initiatives, programs and developments, as well as address the concerns of the residents.

Cox spoke to a full house of Tansi residents, sharing new developments in the department, such as the department has hired three new officers currently training at the academy and has two K-9 units, Nico and Apollo. The sheriff’s department is made up of two divisions, Enforcement and Corrections. The Enforcement Division includes investigations and patrol. Currently, there are 30 patrol officers who cover the county in three designation areas.

“Their job is to work on mid-to high-level drug trafficking organizations,” Cox noted. He also said drugs are the cause and the effect is other crimes, like burglary. They are fighting to reduce drug trafficking and those subsequent issues, to which Cox insured the drug problems have been reduced.

A resident inquired as to the state of the jail and how it is being managed.

“I think about making a jail, a jail,” Cox said as he explained changes he made to deter inmates from “enjoying their stay.”

The jail has a capacity of 212 inmates. Usually, they house an average of 250. Cox cut cable television, froze the commissary and reduced the meal budget. Before, Cumberland County was shelling out about $12,000 a year for cable television services, allowed for family and friends to add money to inmates’ commissary fund to buy extras like snack cakes, and spent $3.52 on each meal per inmate, more than the cost of a child’s meal in the school cafeteria. Each of these things prompted Cox to run the jail like a jail.

He cut the cable service, allowing for inmates to have their mandated news source on television via a digital antenna. He froze the commissary, which in turn kept inmates from being able to stuff their trash in the toilets to clog up the septic system. He also has the kitchen serve a lot of pinto beans, keeping the per meal cost at under $1.

“I want them to not want to come back to that jail,” Cox said.

Cox also shared his passion regarding an education initiative to convert a building into a classroom to teach life skills classes to help inmates to be productive citizens.

Non-violent offenders can earn trusty status and work to clean up interstate and county roadsides, a program funded by the state.

Aside from protecting the fourth largest county in Tennessee, the sheriff’s department also provides security for all court proceedings and offers community programs like Citizens’ Academy, Senior Police Academy, Drug Take Back Program and Sheriff’s Youth Academy. Cox encouraged residents to contact the department if they are interested in participating in these programs.

Cox said Cumberland County is No. 1 for drug take back, with 10,000 pounds of pills collected and destroyed since he became sheriff.

“We have all kinds of programs,” Cox said. “If you can think of it, I’ll put it together.”

Cox was also very proud as he said 191 Cumberland County children had participated in the Sheriff’s Youth Academy this year.

“We are working with the youth to build that relationship. There’s been a disconnect, and we’ve got to fix that,” said Cox.

Cox also pointed out there is a rampant occurrence of scams, playing on the fears and sympathies of residents with calls or emails to con people out of their money. He stressed that residents should be aware of the different scam scheme operators and warned against falling victim to their cons.