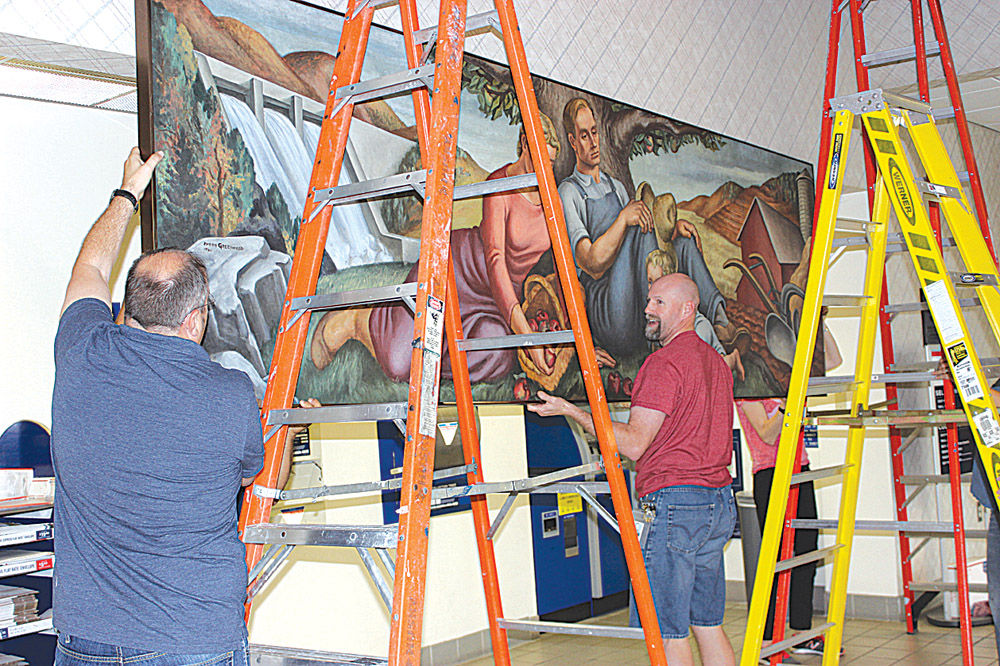 Brian Good, center, with the Crossville Post Office, helps Mike Berry manager of the UT Downtown Gallery in Knoxville, remove the 1940 mural painted by artist Marion Greenwood. The mural will join another of Greenwood's Tennessee works and sketches in an exhibition this summer in Knoxville.

The mural, "Man's Partnerhip with Nature," greets patrons as they walk in the door of the Crossville Post Office.

Brian Good, center, with the Crossville Post Office, helps Mike Berry manager of the UT Downtown Gallery in Knoxville, remove the 1940 mural painted by artist Marion Greenwood. The mural will join another of Greenwood's Tennessee works and sketches in an exhibition this summer in Knoxville.

The mural, "Man's Partnerhip with Nature," greets patrons as they walk in the door of the Crossville Post Office.

Since 1940, patrons to the Crossville Post Office, both at its original location on Main St. and the current facility on Old Jamestown Hwy., have been greeted by a mural commissioned during the Great Depression by New York City artist Marion Greenwood.

Tuesday, the painting was taken down and carefully transported to Knoxville where it will join another of Greenwood's Tennessee murals for a special exhibition.

"As far as I know, there has never been a show of her work," said Mike Berry, manager of the UT Downtown Gallery, which will host the exhibition June 6 through Aug. 9.

The Crossville mural, oil on canvas measuring four feet by 13 feet, is titled "Man's Partnership with Nature," and was commissioned by the Treasury Department's Section of Painting and Sculpture. It depicts a young family on their farm with the recently-constructed Norris Dam in the background.

In a narrative accompanying the mural at the post office, "Ms. Greenwood, sharing the optimism of many people of the 1930s, not only felt challenged by the hardships of the Great Depression but eager to express her ideas in her work. The Crossville mural commission provided such an opportunity, as she had devoted considerable time working for the Tennessee Valley Authority and saw in it a solution to some of the problems afflicting the nation. In the mural, she wanted to suggest the conservation ofwater, land and soil — a sensitive issue at a time when families were being uprooted by the devastating effects of the droughts of the period — and to show how harnessed water power could benefit the people."

That mural, and some of the preparatory sketches, will join the other mural she completed in Tennessee, "The History of Tennessee," a six-foot by 30-foot mural painted for the University of Tennessee when she was a guest professor in 1954 and '55. The mural was on display in the UT University Center ballroom until 1972, when it became the subject of controversy and was vandalized, attacked by acid, paint and a knife.

The controversy centered on one figure in the painting that was to depict Tennessee's musical roots. Greenwood painted a black man dressed in work clothes and sitting with a bag of cotton with a young girl at his knee. Some felt the figure represented a "happy slave," and the painting of Tennessee's history of music was glorifying slavery.

The painting was hidden from view for 36 years before it was excavated from behind paneling in 2006. It was restored and repaired, with plexiglass and curtains placed in front of it.

Now, UT is preparing to demolish the university center and the mural was removed so that it would not be destroyed. The UT Downtown Gallery will store it until an appropriate new home can be found.

Also on display will be lithographs from the Permanent Collection of the Ewing Gallery of Art and Architecture.

"We knew the mural was special to us, but we were really happy when UT contacted us," said Lori Cook, Crossville postmaster.

Berry said the original plan had been to have several photographs of the Crossville mural on display.

"But they were so kind to let us borrow it. We are honored," he said.

Cook hopes Crossville residents take advantage of the opportunity to see more work by Greenwood. The UT Downtown Gallery is at 106 S. Gay St. in Knoxville. The exhibition opens June 6 and continues through Aug. 9. Gallery hours are Wednesday through Friday from 11 a.m. to 6 p.m. EDT and Saturday from 10 a.m. to 3 p.m. EDT. Visit web.utk.edu/~downtown/index.php to learn more.

Hassie Rose Oakes, 83, of Crossville, passed away Wednesday, Jan. 20, 2021, at Life Care Center of Crossville. She was born in Cumberland County on June 13, 1937, to the late Charlie Norris and Eliza (Farr) Norris. Hassie worked as a cook. She was a loving wife, mother, grandma, great-grandm…

Funeral services for Ikey Eugene Davis, 82, of Crossville, were held on Jan. 20. Burial was at Crossville City Cemetery. Survivors include sons, Nickolas Davis and Clendle Davis; and sister, Jerry Smiddie.