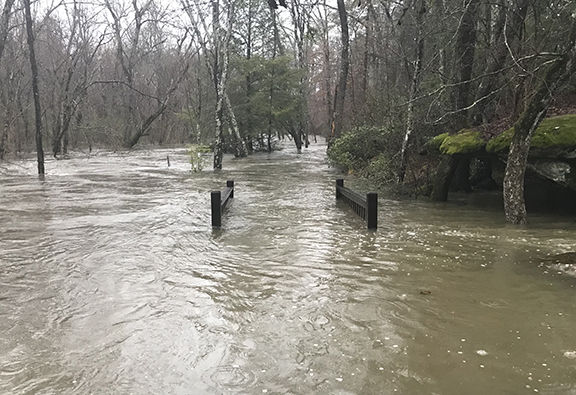 The county closed Obed River Park Thursday after the river overflowed and left the walking trail under water. 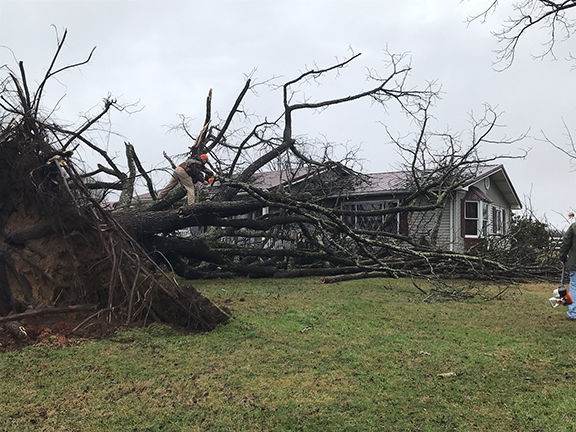 The county closed Obed River Park Thursday after the river overflowed and left the walking trail under water.

One person was killed in an I-40 crash, one trapped in a vehicle wrapped in live power lines and a section of I-40 close following a deluge of rainfall across the Cumberland Plateau since Tuesday.

Crossville meteorologist Mark Baldwin of WeatherTAP reported Thursday morning that he recorded 7.2 inches of rain falling at his residence in northern Cumberland County over the past 30-plus hours. It was still raining when he issued his post on social media shortly before deadline Thursday.

There were scattered reports of winds and rain-soaked earth causing trees to fall across county roads and into utility lines throughout the county. There were reports of electrical service interruptions in two sections of the county because of downed trees on lines.

There were also scattered reports of fallen trees causing damage to personal property. In the Mayland  and Cow Pen Rd. areas, citizens were reporting to the Crossville/Cumberland County Emergency Management Agency that there was damage to house and to a barn caused by high winds.

The Tennessee Highway Patrol reported Donald Monday, 62, Crab Orchard, was driving a 2000 Toyota Camry east on I-40 near the 306 mile marker around 2:30 p.m. Wednesday.

THP Trooper Jack Alderman wrote Monday’s vehicle suddenly veered sharply to the left, traveled across the left lane and into the median. The vehicle then struck two trees and landed on its top.

The crash occurred during a rainfall and in between heavy downpours. Cumberland County ambulance, fire and rescue and sheriff’s personnel rushed to the scene but Monday succumbed to his injuries before he could be transported to the hospital.

THP responded to a report of a single-vehicle crash on Hwy. 70 E., about five miles from Crossville and between Crab Orchard and Crossville. Early reports from the scene stated that a large tree fell against a utility pole, knocking the transformer off the pole which fell across the state highway. The driver of a vehicle reportedly braked and slid into the tree and the vehicle became wrapped in a charged power line.

Ambulance, fire and rescue and the sheriff’s office responded to that scene. The driver was trapped inside the vehicle until Volunteer Energy Cooperative could arrive and disconnect power to the line. It is believed that driver was not seriously injured.

THP is also completing a report of a crash at the 306 mile marker in the west lane that occurred around 2 a.m. Thursday morning. Initial reports from the scene were that a vehicle had crashed into a second vehicle that was parked on the side of I-40. There was also a report that a tractor-trailer rig was involved in the crash.

The driver of the vehicle that struck the parked car — that was unoccupied — was taken by ambulance to Cookeville Regional Medical Center.

In another crash, THP and county emergency responders were dispatched to the 335 mile marker in the west lane of I-40 after a semi-truck rolled over, blocking all west lanes.

Trooper Jeremy Newcombe reported that Sammy Pinckney, 51, Charlotte, NC, fell asleep while driving. When he suddenly awakened, he over-corrected the direction of his truck and lost control, resulting in the rollover. Pinckney was not seriously injured in the crash.

Water was reportedly standing on several city and county streets overnight. The section of Spruce Loop that is a chronic site during heavy rains was covered as was a section of Taylor’s Chapel Rd. in the 6800 block and section of Old Hwy. 70 in the Pomona area.

Caution is urged as motorist continue to travel rural roads until this rain event is over.

There are also early reports that a dusting of snow is expected Thursday night going into Friday.