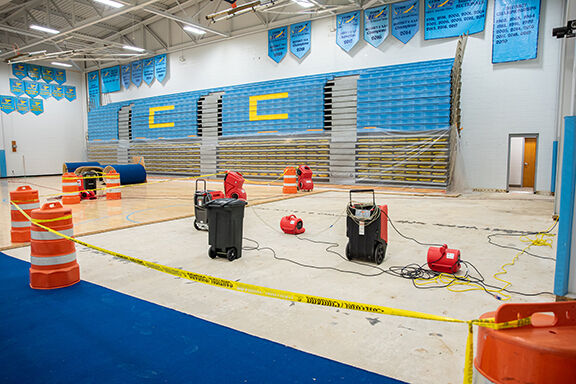 Moisture-removing equipment runs at Cumberland County High School this week following damage to the basketball court. Strong winds blew a hole open in the roof over the home side of the bleachers, resulting in heavy rains falling to the gym floor and causing thousands of dollars in damage. 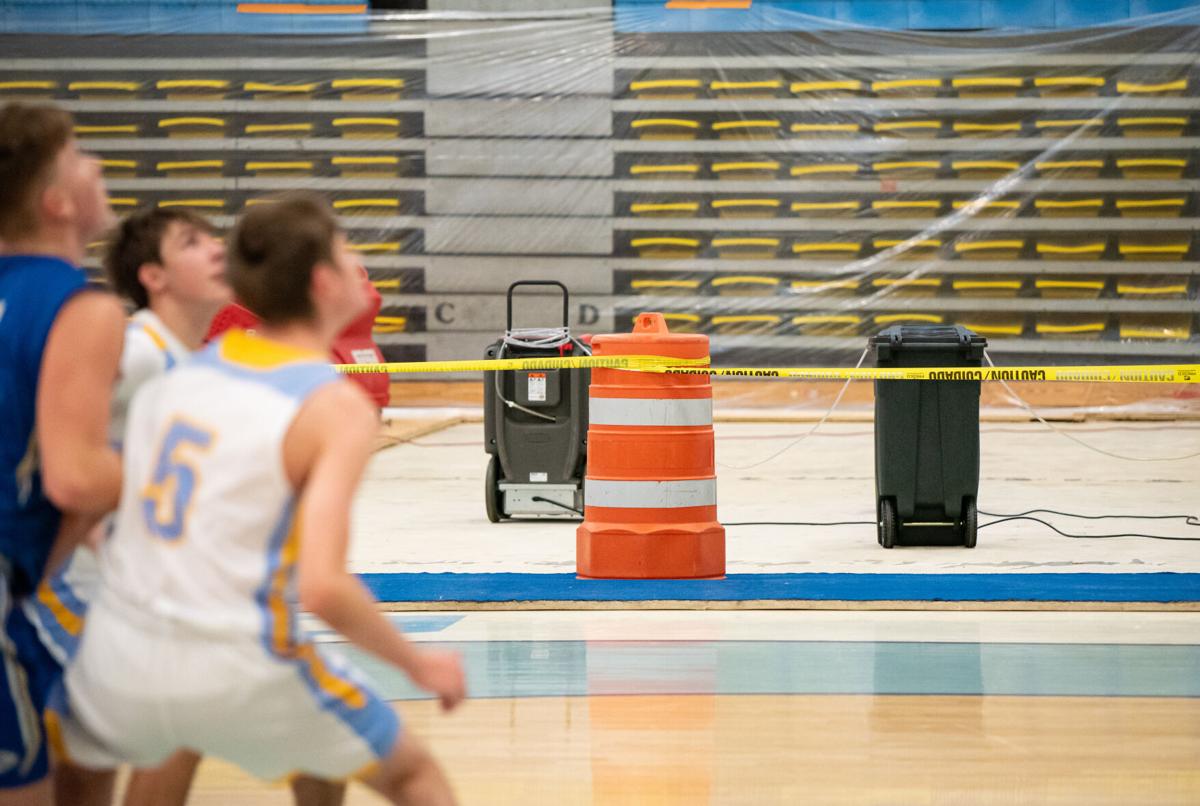 Basketball is played on the main court as machines work to absorb moisture in the damaged area. 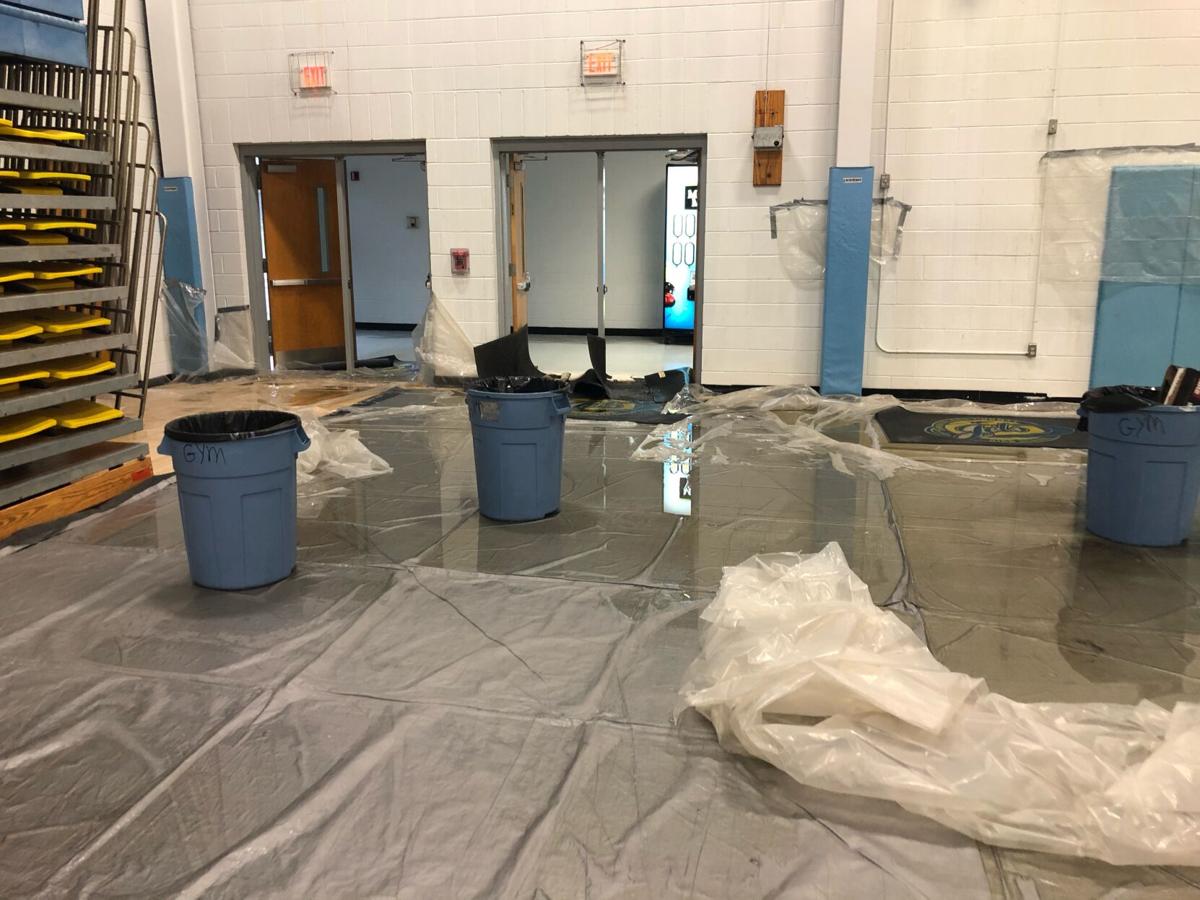 Moisture-removing equipment runs at Cumberland County High School this week following damage to the basketball court. Strong winds blew a hole open in the roof over the home side of the bleachers, resulting in heavy rains falling to the gym floor and causing thousands of dollars in damage.

Basketball is played on the main court as machines work to absorb moisture in the damaged area.

2020 had one more “gift” in store for Cumberland County High School.

On the morning of Dec. 23, strong winds blew off part of the high school’s roof, exposing the gymnasium floor directly below. Later that night, inches of rain filled the home side of the gym, destroying the hardwood and damaging areas of the gym lobby.

“We were here getting ready for our last practice before Christmas,” said CCHS head basketball coach Will Foster, who was at the school when the roof was damaged. “Around 10:30 a.m., I heard the loudest crash and metal hitting. I thought ‘man, something just blew off the roof.’ I went outside and couldn’t really see anything at first.

“I came back in and started practice and we heard a crash again, and the corner of the roof had blown up. The guttering was smacking up against a big vent up there. I called Mr. (Jon) Hall and told him we have a big problem.”

“We experienced about 40 mph winds in the county that day,” said CCHS principal Hall, “Apparently we had a loose piece of roof and some wind got under it and tore the rubber membrane off.”

Due to the high wind throughout the day, workers were unable to access the roof to repair it. Cumberland County Schools maintenance crews attempted to cover the gym floor and exposed areas with tarps, plastic, tape and more, but the water was too much.

“You could see daylight from inside the gym,” Hall said. “We tarped the floor as best we could. We came to check on it Christmas Eve, and it had rained really hard that night before. We had large amounts of water in the gym lobby and on the side court.”

The damage was contained to the side court and lobby rather than the entire gymnasium.

“Luckily, our beautiful main floor was intact and didn’t have any water on it,” Hall added.

The boys basketball trophy case was also within range of the damaging rains.

“That case filled with water,” Hall said. “Luckily we’re able to have those plaques replicated. I’ve been in contact with that company already. Some of the cheerleading award banners were also stained by the water.”

Damages to the trophy cases, plaques, banners and padding around the affected areas is estimated between $5,000-$10,000.

After the damage was discovered on Christmas Eve, efforts to repair the roof and remove the water began the same day.

“We were really fortunate that Mary Kington and the maintenance staff got on the phone and got Jack and Jason Napier from Turner Roofing to come over to see how they could help,” Hall added. “Belfor Restoration came up and hooked up their equipment to help get the water off the floor.”

Looking ahead, Cumberland County’s floor repairs will be handled by a company out of Chattanooga with a stellar track record.

“We’re fortunate for a relationship with Praters Flooring, which is probably the best-known gym floor company in the world, “ Hall said. “They do the Olympics, NCAA tournaments, NBA teams, everything. Mr. Prater himself came up here to put eyes on it himself. They were here about 12 hours.”

The timetable on repairs depends on schedules lining up.

“The whole process takes about four weeks,” Hall said. “We’ve got to find a window that we’re not going to be on the floor. The border of the game floor will come up, and we’ll have to repaint that and reline the side courts.

“We’ll have to screen and coat the entire court again, so we’ll have to find some time that the teams won’t be on it.”

Thankfully, the elephant in the room has already been taken care of: the total cost.

“I have no idea on a total cost,” Hall said. “It’s all insurance. We had insurance adjustors here the Monday after Christmas. Turner Roofing was here to show them the extent of the roof damage. Once we got the go-ahead from the insurance company, we started working.”

The roof and floor damage were the icing on the cake for a chaotic 2020, according to Hall.