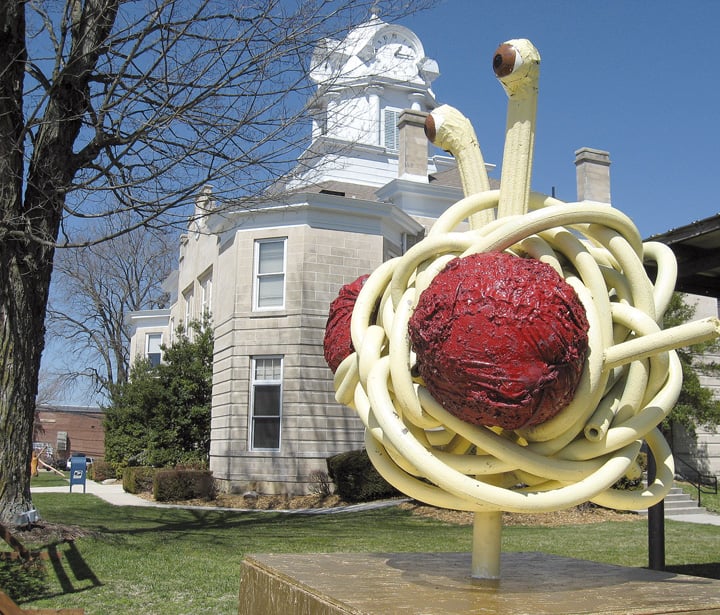 Numerous varieties of artwork are on display at the Cumberland County Courthouse including, here, the sculpture of the Flying Spaghetti Monster. 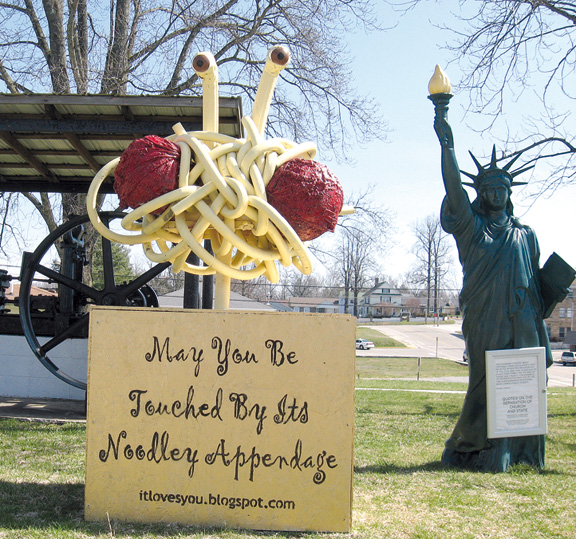 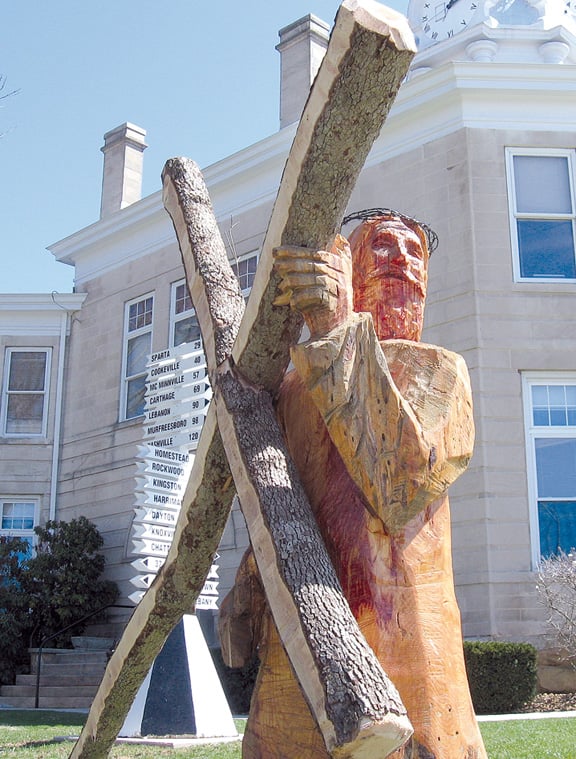 Another sculpture at the courthouse is of Jesus carrying the cross. Other displays include a memorial to soldiers killed in Iraq and Afghanistan, a Statue of Liberty, historic farm implements and fundraising totals. 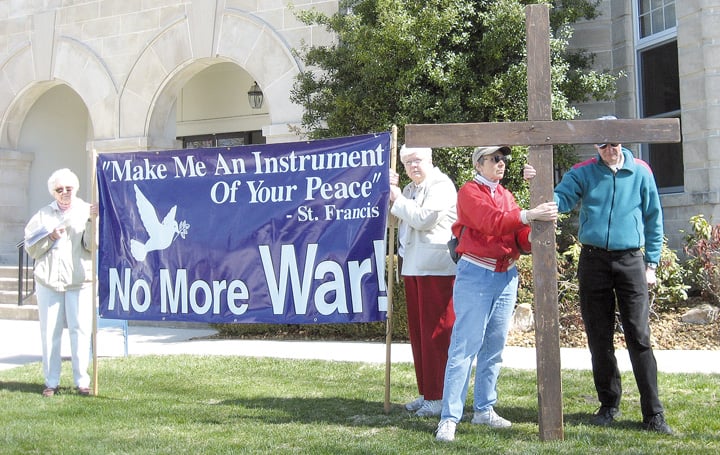 Members of the community also hold rallies and demonstrations on the lawn.

Numerous varieties of artwork are on display at the Cumberland County Courthouse including, here, the sculpture of the Flying Spaghetti Monster.

Another sculpture at the courthouse is of Jesus carrying the cross. Other displays include a memorial to soldiers killed in Iraq and Afghanistan, a Statue of Liberty, historic farm implements and fundraising totals.

Members of the community also hold rallies and demonstrations on the lawn.

Among the county's historic directional sign post, farm equipment and gazebo stand several monuments and expressions of free speech. The displays include an Iraq and Afghanistan Soldier's Memorial, Statue of Liberty, chainsaw-carved monkeys and bears, Jesus carrying a cross, and the most recent display added — a Flying Spaghetti Monster. Several onlookers and tourists have stopped to take pictures of the sculptures. The Flying Spaghetti Monster is the latest display to a slew of others that have been erected on the lawn over the past year. Several marches and demonstrations have also taken place on the courthouse grounds. A free speech zone? Cumberland County Buildings and Grounds Committee Chaiman Harry Sabine explained the committee has deferred all decisions on displays and handling of the courthouse grounds to County Mayor Brock Hill. "I think at some point this may become ridiculous. I'm not so sure if now is the point or not. My concern is about what could or may go up there ... I mean the committee could ultimately decide to remove all displays, but at this point we haven't. I think a time limit on the displays may need to be enacted, though. I do think that too many of these displays tend to detract from the beauty of our courthouse lawn. I think our courthouse lawn is among the prettiest in the state. I hate to see that sacrificed," 1st District Commissioner Harry Sabine said. On her Web site, www.itlovesyou.blogspot.com, a blog explaining the Flying Spaghetti Monster, Crossville artist Ariel Safdie states, "We are lucky enough to live in a country that allows us, its citizens, the freedom of speech. I have chosen to put up a statue of the Flying Spaghetti Monster to represent the discourse between people of all different beliefs. The many faiths, ethnicities and backgrounds of Cumberland County’s residents make our community a stronger richer place. I respect and am proud that on the people’s lawn, the county courthouse, all of these diverse beliefs can come together in a positive dialogue. Here, we are all able to share the issues close to our hearts whether it is through a memorial to the soldiers killed fighting for our country, the Statue of Liberty honoring our nations welcoming promise to all, a group’s fight to stop homelessness, or powerful symbols of faith. I greatly treasure this open forum between everyone in the community." Although it may seem silly to some, Safdie adds, "The Flying Spaghetti Monster is a pile of noodles and meatballs, but it is meant to open up discussion and provoke thought. Being able to put up a statue is a celebration of our freedom as Americans; a freedom to be different, to express those differences, and to do it amongst neighbors — even if it is in a noodley way." Safdie was not available for comment at press-time. County Mayor Brock Hill said, "We are basically operating it as a freedom of speech venue. We don't deny the constitutional rights of anyone, but we certainly don't endorse all the displays. I feel the Flying Spaghetti Monster is an effort on the part of non-Christians to try and minimize Christianity and the images that have been placed there. I'll go as far as to say that I think it's an attempt to minimize and ridicule the good intentions of Christians in Cumberland County, but I don't deny their right." Hill said there have been some requests for displays which have been turned down and each request is looked at on the merit of the display. On Good Friday a chainsaw-carved statue of Jesus carrying the cross was placed on the lawn, along with the Flying Spaghetti Monster and a play of the Stations of the Cross was acted out by the Cumberland Countians for Peace and Justice. "This is a group of various denominations brought together to bring awareness to the injustices of today," said Joe Gittings. Gittings said the group also hosts peace displays or demonstrations at the courthouse each Wednesday from 4 to 5 p.m. Gittings said he appreciates the opportunity the county is allowing. Anyone wishing to erect a display is required to go to the county mayor's office and fill out a building and grounds committee application for use of the courthouse grounds. The applicant must be a Cumberland County resident. The application is reviewed and then either approved or rejected by the county mayor. "We decided to do it this way because it seemed silly to have to meet all the time in order to approve these applications. The committee does have the right, though, to ultimately reject all of them if it decides," Sabine said. Over the past year, a chainsaw-carved nativity scene has been there as well as a massive carving of the Last Supper. The free speech zone began in 2006 after the American Civil Liberties Union in Nashville sent the county a letter asking if the display of a Moses statue meant the county was creating a free speech zone. The displays by various people and organizations have continued since. Hill said unless the situation gets out of hand, he feels the current policy will continue.

Roger Dale Reed, 47, of Crossville, passed away Thursday, March 19, 2020, at Vanderbilt University Medical Center in Nashville. He was born May 17, 1972, in Crossville, son of Gary Dale Reed and Carolyn Sue (Wiggins) Goney. Dale worked for over 30 years for Green Acres Memory Gardens as a se…

Lawrence Dale Kemmer, 85, of Grassy Cove, passed away March 28, 2020. He was born Sept. 29, 1934, in Cumberland County, the son of John Litton Sr. and Mary Bristow Kemmer. He worked many years as an officer with the Roane County Sheriff's Dept. and the Rockwood Police Dept. He then retired a…