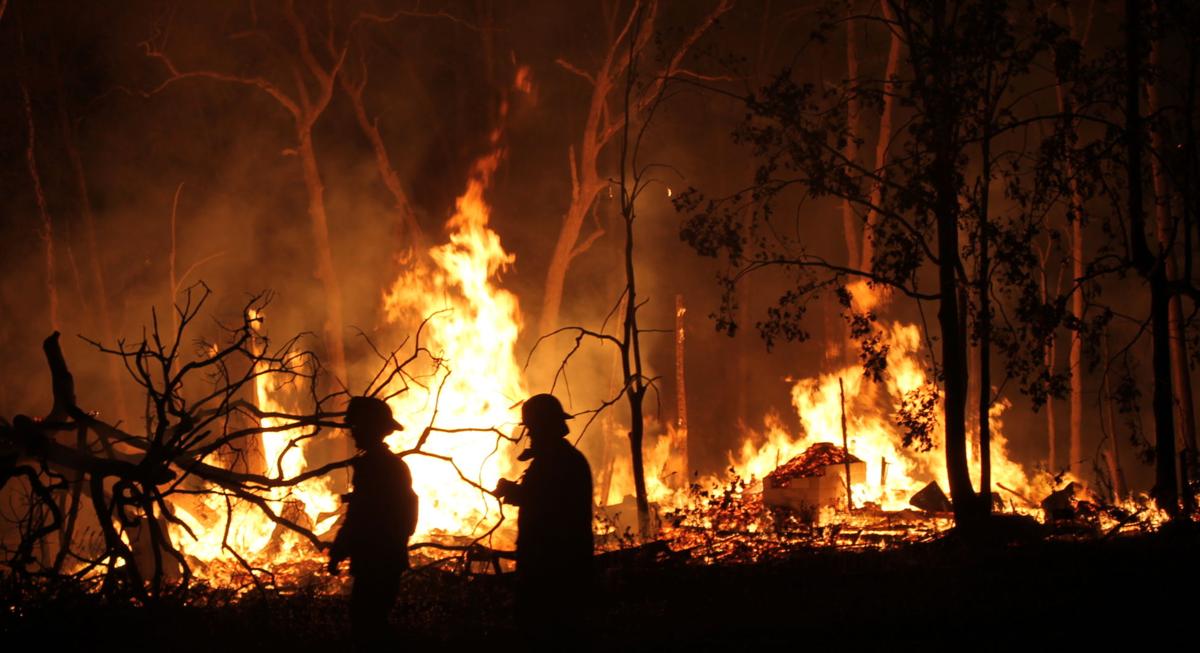 Cumberland County firefighters were dispatched to 364 Beehive Ln. at 10:26 p.m. Tuesday night. The Treehouse was fully engulfed in flames upon their arrival and collapsed shortly afterward. The department used 1,100 gallons of water to prevent the fire from spreading to the nearby wooded area. 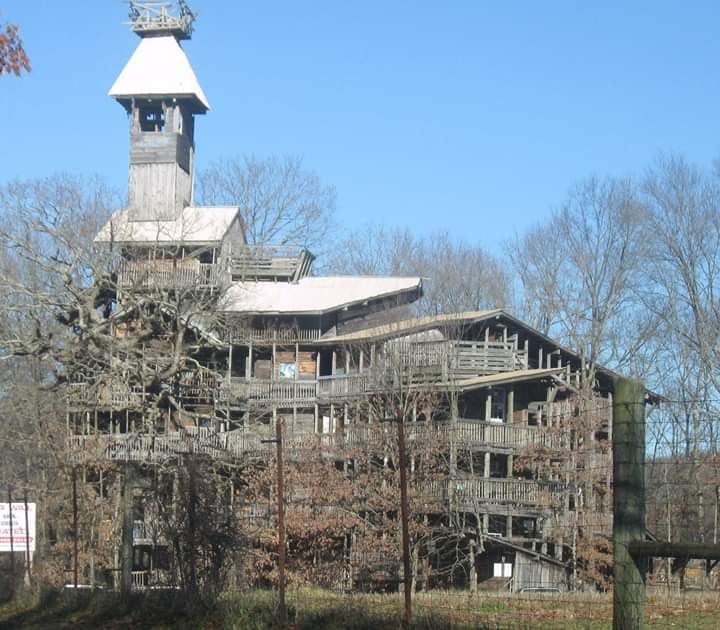 The Minister’s Treehouse in 2011. Visitors flocked to the area from around the country to see the World’s Largest Treehouse. Photo courtesy Bill Thompson

Cumberland County firefighters were dispatched to 364 Beehive Ln. at 10:26 p.m. Tuesday night. The Treehouse was fully engulfed in flames upon their arrival and collapsed shortly afterward. The department used 1,100 gallons of water to prevent the fire from spreading to the nearby wooded area.

The Minister’s Treehouse in 2011. Visitors flocked to the area from around the country to see the World’s Largest Treehouse. Photo courtesy Bill Thompson

It took Horace Burgess more than a decade to build what was touted as the World’s Largest Treehouse.

Tuesday, Oct. 22, the massive structure intertwined between seven trees burned to the ground in a matter of hours.

“The structure was fully involved as units responded and collapsed as they arrived on the scene. Personnel contained the fire to prevent it spreading into the woods,” Derek Carter, Cumberland County firefighter reported. “About 1,100 gallons of water were used to cool areas around the fire. The fire was first reported by the Crossville Police Department.”

A total of four fire units and eight firefighters were on the scene until 2:07 a.m., according to the report.

Cumberland County Fire Chief Trevor Kerley, said, “The origin of the fire is undetermined. There was no electric to the Treehouse. There were no storms that night and there was no insurance on it … Unless there was a witness, or someone who says they set the fire, we have no idea how it started or who started it.”

Burgess sold the 130-plus acre land tract earlier this year.

Glen Clark is listed on the report as the current property owner.

Burgess began work on the Treehouse in 1993 after he said he had a vision from God who told him to build a treehouse. He said as he would run out of supplies more people would donate to the project.

The popularity and legend of the Treehouse skyrocketed and brought visitors to the area from around the country. It was closed to the public in 2012 due to safety concerns.

People near and far shared their sadness at the loss Wednesday.

“I have so many memories there that can’t be erased,” said Holly Neal on the Chronicle’s Facebook page Wednesday. “Thank you Horace Burgess and Roy Stone for giving me so much info about ALL the work that went in to creating a wonderful place to worship God.”

David Sulcer recalled visits to the structure with a Boy Scout pack.

“This place was awesome, from 10,000 square foot treehouse to the swimming hole and even the horses waking us up at 6 in the morning,” he wrote.

“It only took 15 minutes to burn down. It took all day to find the hidden rooms!”

Dorothy Heck of Indiana recalled visiting the Treehouse and going up to the balcony and seeing the name of Jesus cut into the grass below.

“It was beautiful,” she wrote.

Prior to its closure in 2012, the Minister’s Treehouse, once called “The Treehouse The Way” was open to the public, hosted weekly church services, as well as weddings and funerals.

Hundreds of people flocked to the Treehouse on a daily basis. Even more people visited on the weekends.

A couple of months prior to the closure, representatives from the Tennessee Department of Tourism visited the Treehouse during a tour of state tourist attractions.

It was listed on the state’s Pie in the Sky Trail and included signage at the end of Beehive Ln. It was removed from tourism materials following the closure.

The Treehouse was closed to the public in September 2012 after a certified letter was sent from the state fire marshal’s office to Burgess.

The letter ordered the site closed due to safety concerns.

According to the letter, “The State Fire Marshal’s office found that ‘the Treehouse’ had been open to the public, received donations for maintenance, provided advertisement brochures, and sold souvenirs to visitors of the site. It has become an area attraction, and therefore, is required to comply with adopted building codes.

The letter was prompted after a citizen complained to the state with safety concerns and the State Fire Marshal’s office visited the Treehouse Aug. 7, 2012.

According to the fire marshal’s letter, violations that needed to be addressed were:

• The building was over the code allowable height by 60 feet and was eight stories over the allowable number of stories.

• There was no registered design professional involved in its construction.

• There was no systematic load distribution system. The structural stability of the building was questionable. Floors were severely sloped; joist spans and spacing created floors that deflect when stepping on them. Joists and studs were scabbed together with nails.

• Floor decking was uneven in places and presents a tripping hazard.

• In many places, the step rise was too high and the step run is too short. At least two ladders have missing rungs.

• There were many fall hazards resulting from areas with no guard rails and no hand rails.

• Exits were not obvious or marked and navigating the building is difficult. The building is maze-like in design, and we overheard several people asking how to get down to the next floor level.

• There was no fire alarm, fire sprinkler system, or fire extinguisher apparatus present.

Bainbridge wrote that he would be willing to work with Burgess to discuss options for reopening the Treehouse.

Requirements Bainbridge cited for reopening mandated Burgess to have a registered design professional, engineer or architect to assess the building’s structural stability and building and fire code compliance. He would have then had to submit a plan for approval.

“Nevertheless, until such a plan has been submitted, assessed, and approved by the State Fire Marshal’s office, you will be required to close the building to the public and make it unavailable for public visitation, church services, or other events…,” the letter stated.

The State Fire Marshal has this authority under Tennessee Code Annotated TCA 68-120-107.

After the order, Burgess said he had no intention of reopening the Treehouse.

It had sat empty since that time, gradually falling into disrepair.

It also became a target for vandals and was riddled with trespassers coming from all over the country after it was featured on websites and television shows all over the world.

Tennessee Valley Aerials shared this video of the Minister’s Tree House featuring views from before and after Tuesday night’s fire.

And just like that, it was gone. Fire consumed the Minister’s Treehouse Tuesday, burning to the ground in minutes. The fire was reported short…

William "Bill" J. Hess, 87, of Crossville, passed away on June 11, 2021, at Life Care Center of Crossville. He was born on June 3, 1934, in Middletown, NY, son of George E. Hess and Pauline E. Hess. Bill graduated from Orange County Community College, Harpur College, the University of Washin…

Rickie Nile Burgess, 67, of Crossville, passed away June 16, 2021, at Cookeville Regional Medical Center in Cookeville. He was born Jan. 24, 1954, in Crossville, TN, son of Earl Dee Burgess and Bettie Lou Burgess. Rickie was a Merchant Seaman and of the Christian Faith. He is survived by his…