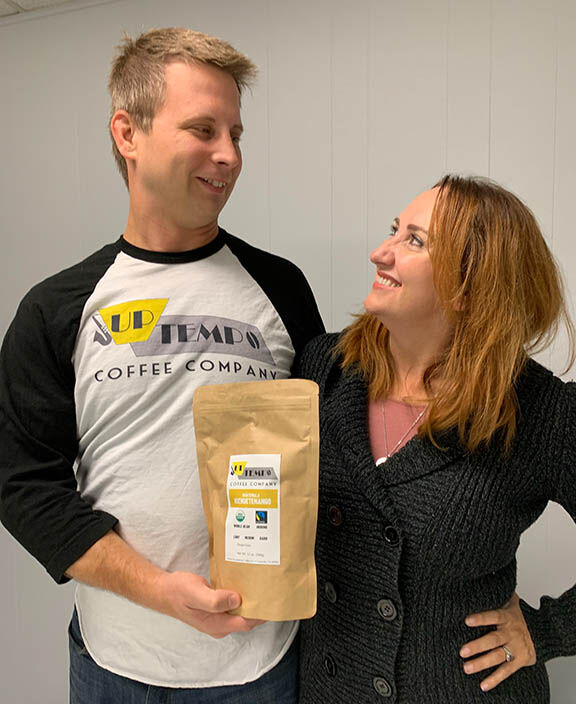 Matt Clyde and Mellisa Ellis hold a bag of his UpTempo Coffee beans. 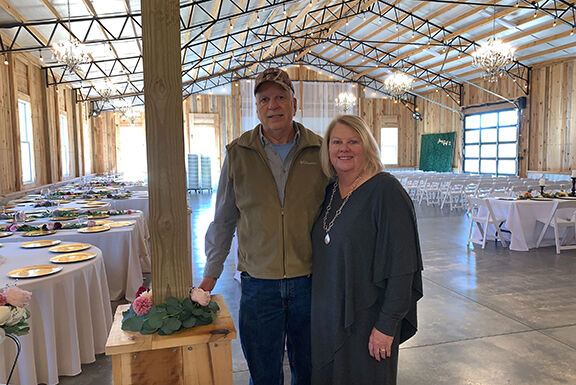 Dean and Vicki Presson are in their events building that has been the site of weddings, birthday parties and other activities. 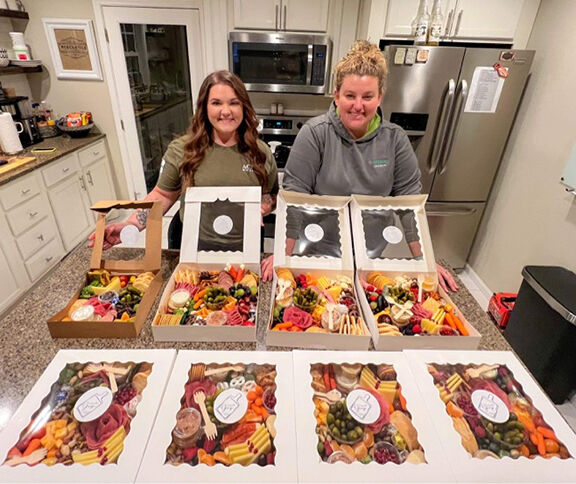 Emily Patterson, left, and Jessica Dillon display packages of grazing boards they offer in their business. 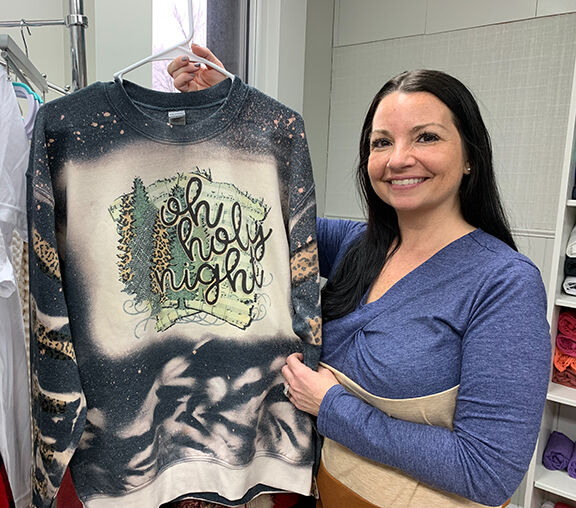 Cassie Stone put her creativity to work with this holiday shirt she decorated for her Creations by Cassie business. 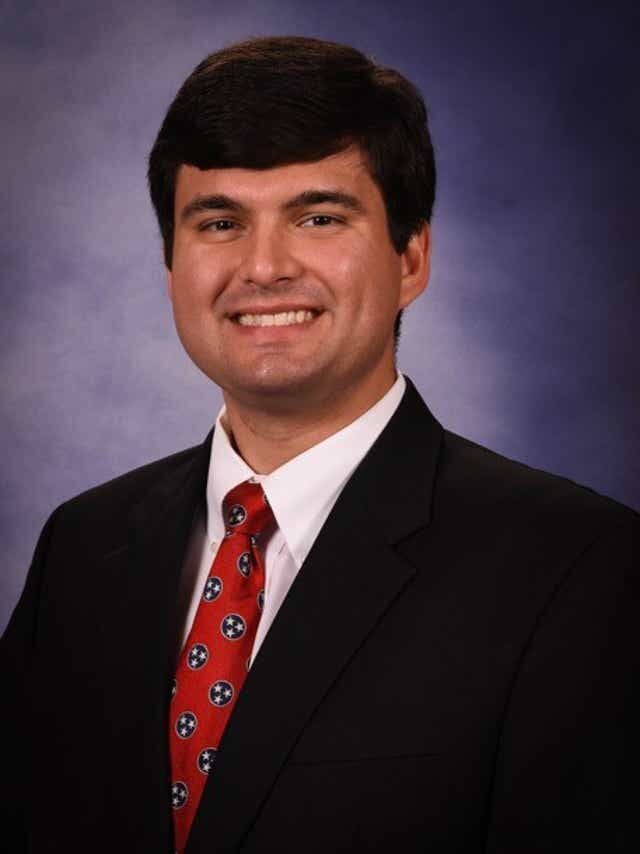 Matt Clyde and Mellisa Ellis hold a bag of his UpTempo Coffee beans.

Dean and Vicki Presson are in their events building that has been the site of weddings, birthday parties and other activities.

Emily Patterson, left, and Jessica Dillon display packages of grazing boards they offer in their business.

Cassie Stone put her creativity to work with this holiday shirt she decorated for her Creations by Cassie business.

New businesses are starting up across the country now more than ever before.

The reasons are many, but circumstances surrounding the COVID-19 pandemic appear to be the primary stimulus.

According to the Census Bureau, about 4.4 million businesses were created nationwide in 2020, the most on record and a 24% increase from pre-pandemic 2019. While such a rapid pace continues this year, the number of new businesses actually running most likely is less because not all business applications result in active operations.

Still, more people appear willing to take the chance -- and assume the risk -- of going for it.

Here are the experiences of several local residents who started a business during the pandemic:

‘Loving every minute of it’

As with many people who start a small business, Cassie Stone’s interest in craftworks began as a hobby.

After her husband, Josh, got her a vinyl cutting machine for Valentine’s Day this year,  she found that she liked it so much she wanted to pursue it as a business.

So she left her job as a teacher’s assistant in the Crossville school system in December 2020 and started Creations by Cassie.

Since adding a heat press and a sublimation printer, she can now transfer motifs and messages onto most types of materials, such as shirts, glassware, mouse pads, totes, even keychains.

Stone initially worked in a downstairs room at their house but quickly outgrew it. She now has a shop in a room at 194 Cleveland St., site of a beauty salon.

She prefers working at a store rather than at home even though she has to pay rent.

“It gives me a storefront, and it’s convenient for customers,” she said.

Stone is seeing her business take off. Her presence on Facebook, Instagram and TikTok has attracted customers in 15 states, and she has orders regularly booked out 3-4 weeks. She has more than made up for the start-up costs of a couple of thousands of dollars.

The best part of the experience, though, is her feeling that she’s not even working.

“I am loving every minute of it,” she said. “I feel like I come to work and play all day.”

So much that he roasts coffee beans and sells them under his UpTempo Coffee Company brand.

“I always dreamt of one day retiring and roasting coffee and enjoying that kind of a lifestyle,” he said.

Although Clyde’s not ready for retirement -- he works a full-time job in branding and packaging development for retailers -- he started a coffee roasting side-business in August.

Clyde’s foray into coffee started as a hobby when he roasted a half pound of coffee beans in a cast iron skillet. He said it “worked fine” except for the mess it created, such as from smoke filling the house and bits of coffee beans scattered about the kitchen.

Now using an air roaster designed for the task, he roasts a pound at a time and offers light, medium and dark roasts from several countries including Ethiopia, Rwanda, Costa Rica and Guatemala.

Startup costs for his business were minimal, a couple of hundred dollars for equipment and supplies. He is considering buying a larger roaster in the next year to increase capacity. That would cost about $10,000.

Clyde doesn’t have a store. Customers order from the online site Etsy or, easier, by messaging him through UpTempo’s Facebook site. He also sells his coffee at events such as farmers markets.

The company name comes from the interest in jazz music he and his wife, Melissa Ellis, share. She sings and plays piano, and he plays drums. They perform often, either together or Ellis as a solo.

But that wasn’t the case for many months during the pandemic when venues ceased live performances.

“So our income got hit,” Ellis said.

To help with family finances during the pandemic, Ellis started an events planning business after taking three online courses to learn the details of how to run one. She helps couples plan their weddings, and she is coordinating appearances for a candidate for Cumberland County General Sessions Court judge in next year’s elections.

And she is performing regularly again.

Something old, something new

For Dean and Vicki Presson, there was no place like home for a new business.

They built a wedding venue on two acres of their 110-acre farm outside Crossville.

The business is called Homestead 32, the original address of Vicki’s grandparents A.Q. and Effie Morgan. The Morgans acquired the property in the Cumberland Homesteads community, a New Deal subsistence program of the Franklin D. Roosevelt administration, after making their last payment in 1943.

The farm through the years has consisted mostly of cattle and some hay. The Pressons added the wedding venue for both indoor and outdoor occasions to help sustain the family farm for future generations. It also has been used for birthday parties, baby showers and a Sweet 16 party.

“We wanted to keep it family-oriented,” Vicki said, explaining that this focus is a tribute to her grandparents.

Construction of the 5,000-square-feet building, which Dean describes as a “contemporary pole barn,” began in the fall of 2019, and the family had expected to start having events there in 5-6 months.

“Then the pandemic hit,” Vicki said. Although it slowed construction, the venue eventually opened in December 2020 with a wedding.

The family has hosted 32 events there so far this year, some outdoors. Vicki said they are on track to “way exceed that” next year.

The family limits events to one per weekend, a practice they set during the pandemic.

“We do that because of the time it takes cleaning and providing a safe area for clients,” Vicki said. “We will continue that.”

The timing for Matthew McClanahan and Alexander Wilson to become law partners would have been better if not for the circumstances.

They formed McClanahan & Winston, P.C., in March 2020, right at the time when the COVID-19 pandemic was hitting hard and courts were shutting down.

“There were no in-person proceedings at all,” McClanahan said.

While that limited their work, some services they provide have little to do with courts, such as estate planning and writing rental agreements for residential and commercial landlords.

“We stayed busy during the pandemic and continue to be. We’re very blessed,” said McClanahan, whose office is in Crossville. Winston works out of  Knoxville.

The biggest challenge for McClanahan and Winston was in learning to conduct some business online such as through Zoom video conferencing.

“There was a learning curve in trying to adopt those new technologies,” McClanahan said.

In time, businesses and courts began reopening to the public.

“Things are starting to get back to normal,” he said.

Party platters might be all the graze now in catering.

Emily Patterson and Jessica Dillon sell platters of cheeses, meats, vegetables, fruits, nuts, pastries and other treats in a business they call Crossville Grazing, a reference to “grazing boards,” which allow guests to munch on a variety of foods either before or instead of a sitdown dinner.

“We started it just for fun, as a hobby,” Dillon said.

Then something happened that made them think their hobby could turn into something more serious.

“We had people asking us to do this for weddings and baby showers,” Dillon said, adding that grazing boards have increased in popularity.

So they decided in August to jump into the world of entrepreneurship while still working full time as human resource managers at different companies.

Getting their business off the ground required a total investment of $4,000 to $5,000. Dillon said they are getting to the point of recovering that expense.

Dillon and Patterson work out of their homes for now, but they hope to open a store if their fledgling business continues to grow and they decide to go all-in. Orders mostly are filled through Crossville Grazing’s Facebook page.