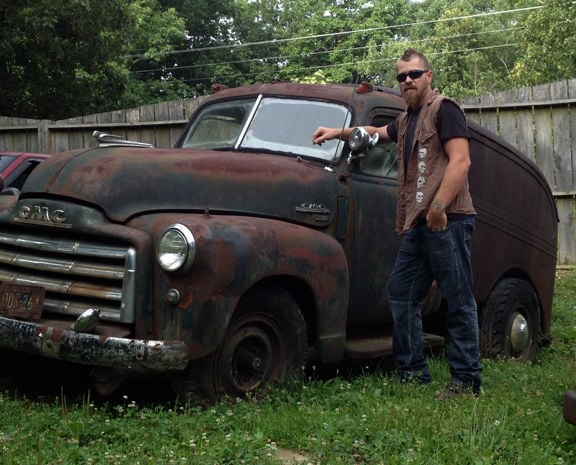 Mason Dixon with the 1948 GMC truck he found to use in the 2014 Rat Hard: Great American Blue Collar Build-Off competition. He had 30 days to transform the truck and get it road ready before the tour began last weekend in St. Louis. 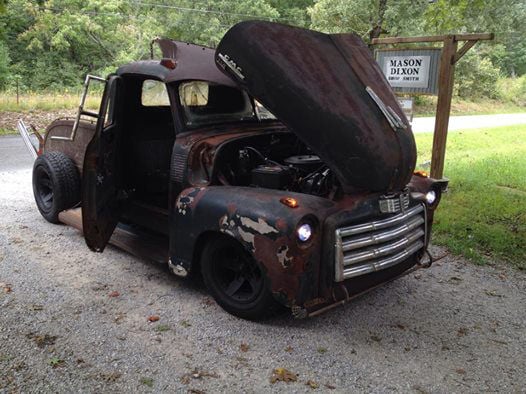 "The Code" is a bike hauler and roadside assistance truck. It used parts from seven different vehicles and six different bikes.

Mason Dixon with the 1948 GMC truck he found to use in the 2014 Rat Hard: Great American Blue Collar Build-Off competition. He had 30 days to transform the truck and get it road ready before the tour began last weekend in St. Louis.

"The Code" is a bike hauler and roadside assistance truck. It used parts from seven different vehicles and six different bikes.

The 1948 GMC truck didn't look like much just 30 days ago, with a rusting body and no motor.

But Mason Dixon looked past the rust and saw the potential. When he pulled out of his driveway last week on the way to St. Louis, that old truck had a new lease on life.

"We start with a body, change up a few things and get them back on the road," Dixon said of his hobby that's turned into a business. He's made several of these rebuilt "rat rods," as they're called, but this one was a little different.

Dixon, owner of Mason Dixon Speed Shop in Cumberland County, is one of 13 rat rod builders across the country selected by random drawing to participate in the 2014 Rat Hard: The Great American Blue Collar Build-Off competition, which is being judged on a combination of public votes and judges' decisions. He is the only builder from Tennessee participating this year.

The truck, named "The Code," grew out of Dixon's love of motorcycles and the biker's code to never leave a rider behind. The truck is a bike hauler and roadside service truck, but with a lot of custom work and a lot of that rat rod flair, reminiscent of the style of 1940s, '50s and '60s hot rods.

"I love being on the open road. It took me back to my roots,” he said of the design. But there was also strategy at play. The build-off includes a bike division, and there will be many bikers in the crowds.

The build-off takes the growing popularity of rat rods, spurred by reality television series in recent years, but offers rules that make it possible for any garage or builder to participate.

These custom vehicles are made by salvaging bits and pieces from old cars, scrap, salvaged metal and other parts. Building one involves finding the treasure in another's trash. To keep things fair and to add to the challenge, build-off participants had a budget of $3,000.

Ability to stay within or under budget is part of the competition, and parts are logged at market value.

Dixon started bright and early Aug. 13 tearing into the 1948 GMC truck. He built seven trucks last year, with each taking about 30 to 45 days to complete. This project had a strict timeline, so he called in some reinforcements, with his brother, Rusty Donovan; nephew, Tyler Cooper; and friend Hank “The Butcher” helping to cut up the car in the evenings and weekends. The rest of the time, it was just Dixon and the truck.

When he revealed the truck on Facebook with a week and a half to go in the build-off, his budget was at $2,360 out of pocket. He had logged 283 hours of work and salvaged parts from seven different vehicles and six different bikes.

He likes to combine the old bodies with new technology that makes the truck easier to operate and drive, with power steering and fuel-injection.

"A lot of the old guys like the carburetors, the old-style steering. I'm an old-school guy at heart, but I like this new stuff,” he said. “They're fun to drive.”

But the combining of classic styling with new technology doesn't come without lots of effort.There is a lot of wiring,” he explained. “That's the nightmare of the whole project.”

Building the rat rod is only part of the challenge. After the 30 days were up, builders had to hit the road and start the Rat Rod Magazine Tour in St. Louis, MO, at Steelfest. The tour returned to Tennessee Monday, stopping in Chattanooga, and participants make their way to Lebanon later this week for the finish at the Redneck Rumble.

Dixon was to log 300 miles in The Code over the entire tour. The trucks are not just supposed to look good, but be operational. The competition required all vehicles to be properly titled, tagged and insured. The contest stresses safety first and they all had to be road worthy. However, a breakdown on the way isn't enough to disqualify a builder, and judges would look at how a builder resolved these issues on the road.

Dixon smiled when asked about contingencies and breakdowns. "Not my truck," he said.

The group forms a convoy for its drives, taking back roads when possible. Builders from Virginia and North Carolina met up with Dixon last week in Crossville and they all traveled together to St. Louis.

Judging is a combination of judges decisions and public votes, which can be cast by visiting www.buildoff.us. Visit his Facebook page, Mason Dixon Speed Shop, to see videos and more photos. Voting closes Thursday.

The winner will be announced Saturday afternoon in Lebanon at the Redneck Rumble.

Heather Mullinix is assistant editor of the Crossville Chronicle. She covers schools and education in Cumberland County. She may be reached at hmullinix@crossville-chronicle.com.

UPDATE: Mason Dixon spent a few days back in Crossville earlier this week before hitting the road again in his rebuilt 1948 GMC truck "The Co…

James Cleveland Elwood, 83, of Fairfield Glade, passed away Friday, Nov. 20, 2020, at Cumberland Medical Center in Crossville. He was born on March 3, 1937, in Key West, FL, son of the late Ray Owen Elwood and Martha Louise (Brady) Elwood. He worked for the U.S. Navy Civil Service as an arch…

Melissa Ann Taylor, 42, of Crossville, passed away at home on Friday, Sept. 25, 2020. She was born on March 20, 1978, in Dearborn, MI Melissa worked as a receptionist for Holiday Inn for many years. She will be truly missed by all of her family and friends. She is survived by her husband, Ma…