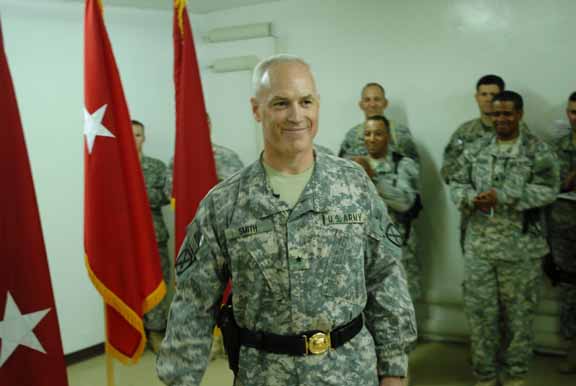 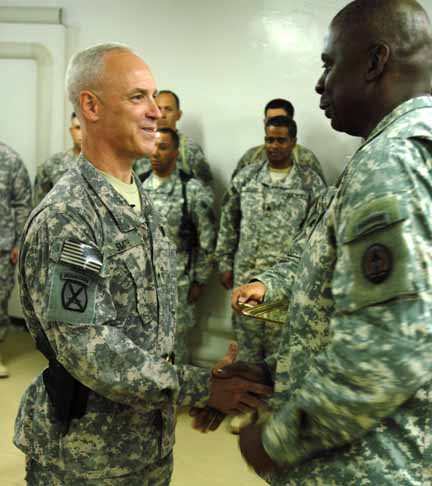 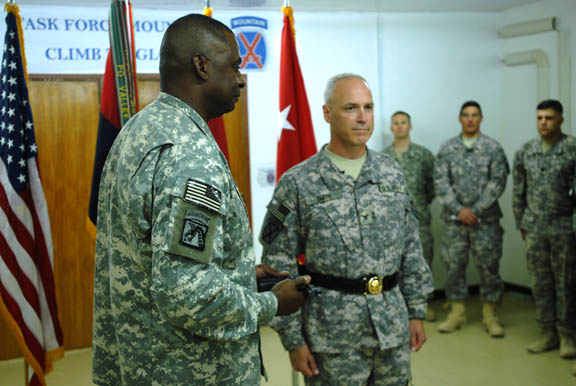 From facing the threat of Soviets and the USSR in 1983 to currently fighting terrorists in Iraq, Jefforey Smith has seen a lot in the 25 years he's been in the military. Now he can add brigadier general to his list of accolades. Smith, of Crossville, was promoted to brigadier general Sept. 11 with family and friends watching via video teleconference system back home at Fort Drum, NY. "He is the caliber of man we look at to lead the Army," said Lieutenant General Lloyd Austin III, Multi-National Corps — Iraq commander, said at the ceremony. "Jeff has done a great job, holding a number of challenging positions during his 25-year career. We are going to award him the rank that he has justly earned." Smith was commissioned a second lieutenant of Infantry through Reserve Officers' Training Corps (ROTC) at Ohio State University in 1983. He started his career in the 505th Parachute Infantry Regiment at Fort Bragg, NC, where he served as Mortar and Scout Platoon Leader, Company Executive Officer and Battalion Air Operations Officer. He commanded a rifle company in 2d Battalion, 327th Infantry Regiment, 101st Airborne Division from 1989-1991. Key staff assignments from 1991 to 1999 include Fellowship Officer in the Office of Secretary of Defense, Plans Officer in the U.S. Army Pacific, Battalion and Brigade Operations Officer in 1-14th Infantry and 2th Brigade and infantry assignment officer at Personnel Command. He has served in a variety of command and staff assignments with the 101st Airborne Division (AASLT), the 25th Infantry Division (Light), PERSCOM, CENTCOM and 10th Mountain Division (Light). His deployment history includes Operations Desert Shield, Desert Storm, Joint Guardian and Iraqi Freedom. "This is a very humbling opportunity to be promoted on this day," Smith said in a phone interview from Iraq Friday. "It is a meaningful way to share it with comrades and family." His division covers an area double the size of Tennessee. "Economic development needs to take place here in Iraq," he said of his main responsibilities as brigadier general. "We're also working with Iraqi security forces to train them." Other responsibilities include providing direct oversight of the Governance, Reconstruction, Economic Coordination Cell (GRECC), oversee the Commander's Emergency Response Program (CERP), and to oversee the Provincial Reconstruction Team (PRT) and the embedded PRT effort in the Multi-National Division — Center. He is also to provide mentorship, assistance and coordination to set conditions for their success. In 25 years, he has seen the military undergo a number of changes. "The focus was on USSR threats when I came in in 1983," he said. "We've also gone through a significant reduction of forces. When I joined, there were 18 active divisions. It has dropped to 10 today." As the son of a military father, he moved around a lot. However, his mother was raised in Tennessee and his wife is from Crossville, with her parents, Bill and Maxie Temper, currently living in Tansi. When asked why he joined the military, he said he enjoys the challenges made by these opportunities. "It's an honorable experience," he said. "I came out of high school playing football. But I watched my father and grandfather serve in the military, and I joined the ROTC program at Ohio State. I enjoy making a difference in lives and taking care of people." Smith is the father of two children, a daughter who is a senior at UT Martin and a son who is a graduate of UT Martin and is now a lieutenant in the Army, based out of Georgia. He has been deployed to Iraq before and is on his way again later next month. Smith is scheduled to serve until mid 2009. "I have served in Iraq a number of times, and I'll go where ever the military goes." He is a graduate of the U.S. Army Command and General Staff College and U.S. Army War College. He holds a master of science degree in admission from Central Michigan University and a master of science in strategic studies from the U.S. Army War College. His military courses include Airborne, Ranger, Air Assault, Jumpmaster and Infantry Mortar Platoon Leader. Spc. Josh LeCappelain, MND-C PAO, also contributed to this story)

Alfred (Al) C. Heine Jr., 75, of Crossville, passed away April 14, 2021. He was born Feb. 8, 1946, in Ridgewood, NJ, the son of the late Alfred C. Heine Sr. and Alice B. Heine and worked as a mechanical engineer in New York and North Carolina before his retirement to Fairfield Glade. Al is s…

A memorial gathering for Justin Owen will be held May 1st at Cumberland Fellowship Church in Crossville. Visitation will be 12 noon until 1:30 pm, service immediately following at 1:30.

George Henry Eller, 74, of Crossville, passed away at his home surrounded by his family on Tuesday, April 13, 2021. He was born Oct. 17, 1946, in Crossville, son of the late Thomas Calvin Eller and Daisy Elizabeth (Dodson) Eller. After proudly serving his country in the Army during Vietnam, …