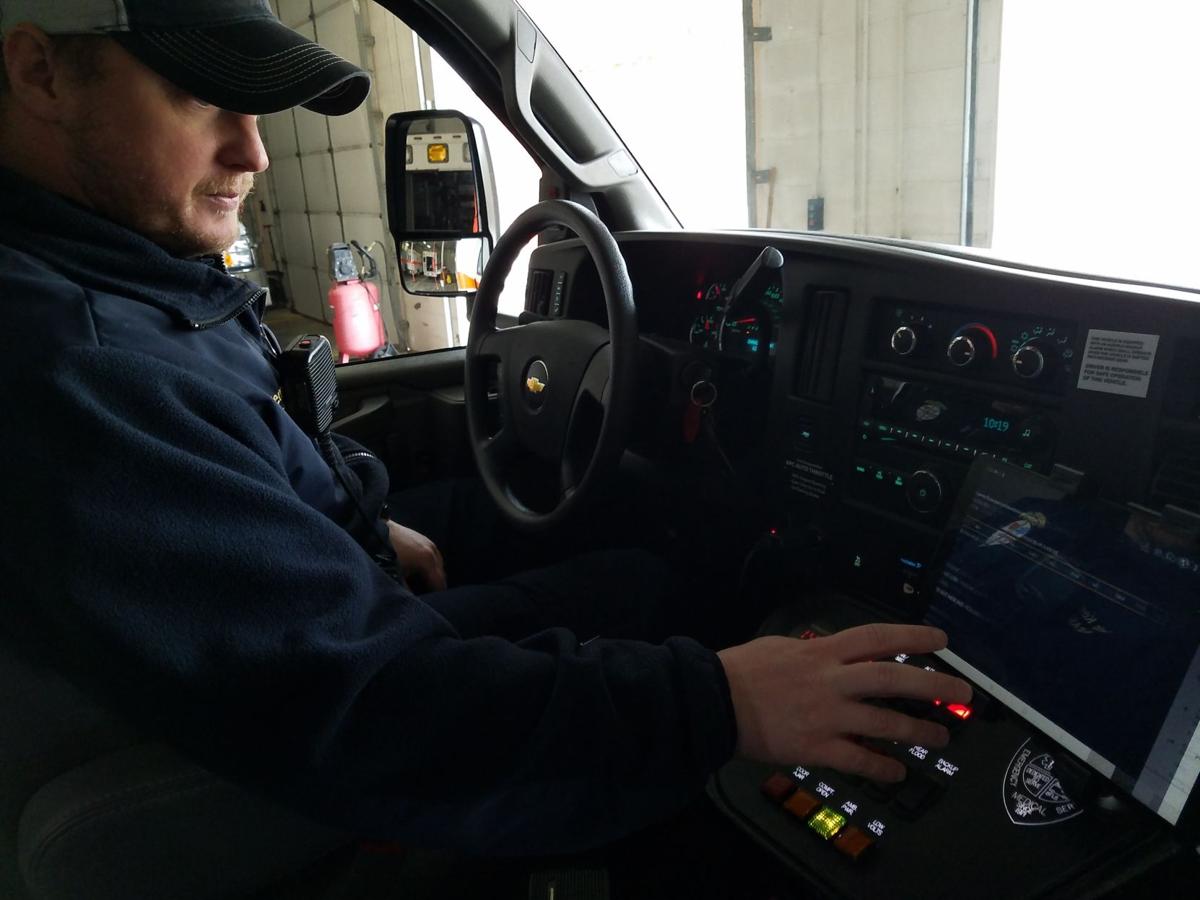 Paramedic Chris Miller pulls up information on a call using new tablets equipped with Active 9-1-1. The app allows ambulance personnel to map the location of emergency calls with information directly from emergency dispatchers. The pilot program was well received and the department was looking at equipping all ambulances with the new equipment. 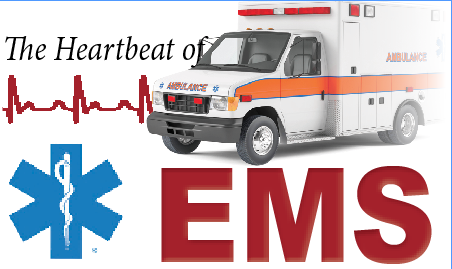 Paramedic Chris Miller pulls up information on a call using new tablets equipped with Active 9-1-1. The app allows ambulance personnel to map the location of emergency calls with information directly from emergency dispatchers. The pilot program was well received and the department was looking at equipping all ambulances with the new equipment.

Dispatchers must get important information from the caller and determine which of the 10 agencies it serves is needed at the scene.

Then, responders must travel from their current location to the patient.

According to Cumberland County Mayor Allen Foster, Emergency Medical Services response times averaged 9 minutes and 11 seconds in 2019 — and improvement from 2018’s average response of 9 minutes 26 seconds. An ambulance was on scene in 10 minutes or less 63% of the time, up from 61% in 2018.

“Some of the things we’ve done to improve those times haven’t had a full year yet,” Foster said. “We’re trending the right direction — and we’re not done working on this thing.”

In the urban areas — Crossville, Fairfield Glade and Tansi — the response time for emergency calls averaged 8 minutes 25 seconds in 2019, down slightly from 8 minutes 29 seconds the year before.

“We want to have the best service we can possibly have in Cumberland County,” Foster said, adding he meets frequently with EMS Director Chris Miller.

Some residents, however, believe the clock starts when someone picks up the phone.

“I had a heart attack. When we called the ambulance, I really didn’t care what process they went through, I wanted to know how quick they were going to get there,” said Tom Reigle.

Currently, there are no state or federal laws regarding EMS response times. A national study of EMS response times published by the Journal of American Medical Association in October 2017 found an average response time of 7 minutes from call to on scene with the time increasing to 14 minutes in rural areas.

John Byers of Fairfield Glade points to information from the American Heart Association that calls for 8 minute response 90% of the time for advanced life support. He and Reigle are among a group of residents who are advocating for ambulance service performance standards.

Despite some changes in the department, Reigle and Byers say response times are not headed the right direction. They point to October data that found response times exceeded 10 minutes for 69% of the calls, with a median “call to on-scene” time of 11 minutes 33 seconds in town up to 16 minutes and 39 seconds in Crab Orchard.

They plan to review data quarterly in the coming year to study trends.

Both Reigle and Byers say the county needs to establish performance standards for EMS services and provide the resources necessary to meet those standards.

Reigle said, “About one in every five county residents, and virtually 100% of every nursing home resident, will be in an ambulance this next year.”

Byers added, “There was one day they had nine calls in one hour in Fairfield Glade.”

He said the increasing age of county residents would continue to increase the need for ambulance services.

Cumberland County treats all calls through the 9-1-1 system as emergency calls while some ambulance services use a priority dispatch system where the caller and dispatcher can set a priority depending on the nature of the call.

“I’ve had calls where they say it’s a fall, but they think the patient is OK, and when I get there, the patient is in cardiac arrest,” Miller said. “Every call we run, we consider the possibility of a missed diagnosis.”

CTAS found most calls for EMS come from the Crossville area, followed by Fairfield Glade. Two-thirds of incidents were logged between 6 a.m. and 6 p.m., with most from 2 to 3 p.m. Tuesday and Friday both had the highest number of incidents while Sunday had the least. About 24% of calls overlap — received during the same hour as another call. Most of these overlapping incidents occur in Crossville.

Cumberland County includes 681 square miles, making it the fourth-largest county by area in the state. It is served by seven ambulances stationed around the county and an eighth ambulance that is in service 16 hours a day.

“I’ve said this before, but until we can predict where calls are going to happen, we have to put them in the areas where the calls are most likely,” Miller said during a May meeting of the emergency services committee.

Three ambulances are at the main station in Crossville, with one each in Pleasant Hill, Plateau Rd., Tansi, Fairfield Glade and Crab Orchard.

Foster said the CTAS data included countywide response, not just the urban areas. Fairfield Glade had the most incidents with a response time of 10 minutes or more, according to the study.

Next, CTAS recommended “backfilling” the Fairfield Glade station by sending the 16-hour ambulance to cover the station when the assigned ambulance was on a call during peak hours of 8 a.m. to 6 p.m. during the week.

Foster said that change was done within days of receiving the report.

“If a call is not coming from the main station, it’s most likely coming from Fairfield Glade,” Foster said. “We started that the next Monday. We are meeting the CTAS recommendation.”

Foster said the ambulance is staged in or around Fairfield Glade, though it may not always be at the EMS station.

“It is a balancing act keeping the entire county in mind,” he said. “This is the case for all of our locations as EMS attempts to provide coverage throughout the day.”

Other efforts to improve EMS response time have included buying GPS systems for the ambulances and providing personnel with pagers that alert them to an emergency call. Before, they were called on the phone.

“Now, when we hear the tone on the pagers, we’re up and walking to the truck,” said Paramedic Chris Kemmer. “Even at night. We’re able to have a one or two-minute response time, which is phenomenal.”

In recent weeks, the county has piloted using tablets equipped with the Active 9-1-1 app, which allows the ambulance personnel to immediately get address information from dispatch and start toward the emergency. The app provide GPS services and can update with voice activation.

“We’re thankful and very blessed for CMC,” he said. “We can transport the patient to provide that first level of care, but there are times patients need care that can’t be provided here, and they have to be transported.”

About a third of ambulance calls require personnel to transport a patient out of town, Byers said, adding it takes about four hours to complete each transport.

Miller said the ambulance department tries to mitigate the impact of those out-of-county transports. For example, they use a rotating schedule to determine which ambulance is sent outside the county. They will then “pre-stage” an ambulance halfway between town and the area where the transport ambulance was stationed.

Patients must have a medical need for convalescent transport. Medicare requires the patient to be unable to stand without assistance before the trip would be considered covered.

Byers and Reigle have studied ambulance service in surrounding areas and found several communities contract with private companies. Their service contracts include specific standards for emergency response and financial penalties.

“Our feeling has been we should be able to at least provide the level of service other counties provide,” Byers said. “Which we don’t have today.”

The county commission approved a resolution in January 2011 that requires anyone providing medical transport services in the community to meet certain standards, but Byers says it prevents private competition and doesn’t set performance standards for the county’s operation. In May, the emergency services committee of the county commission voted not to privatize the ambulance service.

Foster told the Chronicle private contracts often set different criteria for rural and urban response, and can allow extensions of time if a first responder arrives on the scene. He said the guarantees also sometimes only apply to “priority 1” calls but Cumberland County doesn’t prioritize emergency calls.

However, private companies sometimes have resources the county does not, like technology that analyzes historic emergency call data.

Byers and Reigle said a private company they talked with doesn’t have stationary substations. Instead, the company moves ambulances around the community throughout the day to provide the fastest response in areas where historical data says calls are most likely to originate.

According to the U.S. Census, 30.7% of Cumberland County residents are above age 65. Byers and Reigle said ambulance use increases with age, particularly among seniors living in assisted living or other care facilities.

Reigle noted the county has one of the lowest property tax rates in the state. The county charges property owners $1.56530 per $100 of assessed value. This places Cumberland fifth lowest among the 95 counties in 2019, according to the Tennessee Comptroller’s office.

“There is a tendency to be very frugal,” Reigle said.

Byers said that could impact the county’s ability to recruit retirees.

“We have a population increase. The average age has increased. And we have the same seven ambulances,” Byers said. “I’m reaching a point that this is not the area that is in my best interest to be.”

While a private ambulance company has bowed out of discussions with a citizens group, some residents believe the county has missed an opportun…