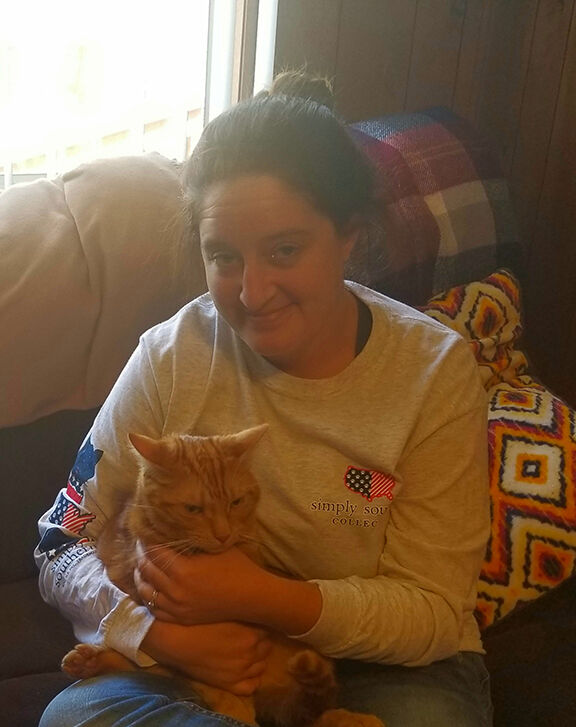 Holly Brown with FOCCAS confirmed the orange tabby was Ron the Cat and contacted the Vincents in Texas. 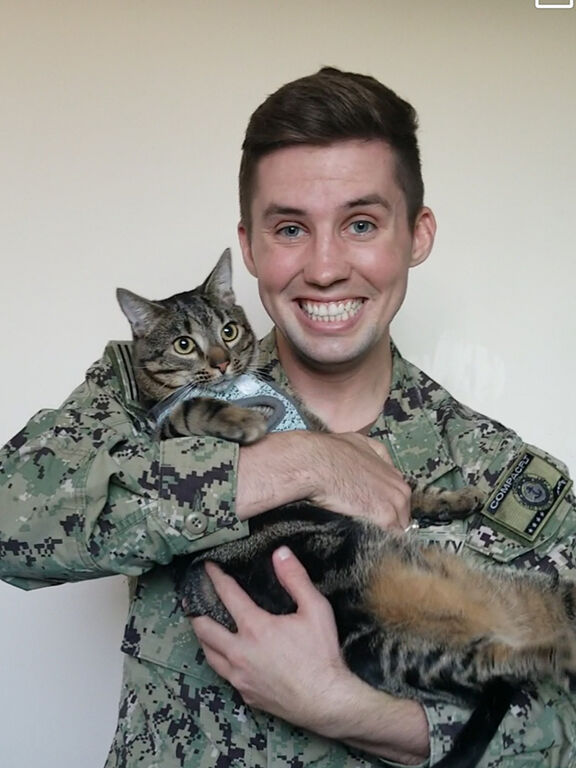 Stephen Vincent and his furry feline Steve eagerly await the return of Ron the Cat. 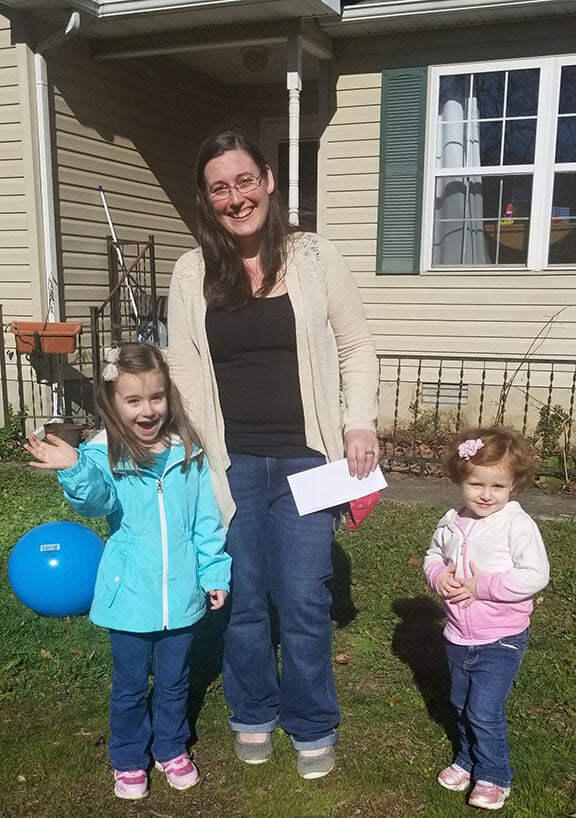 Jessica Cox, pictured with daughters Inara and Avery Cox, found Ron the Cat living in their barn. After two weeks, she was able to lure the cat inside her house.

Holly Brown with FOCCAS confirmed the orange tabby was Ron the Cat and contacted the Vincents in Texas.

Stephen Vincent and his furry feline Steve eagerly await the return of Ron the Cat.

Jessica Cox, pictured with daughters Inara and Avery Cox, found Ron the Cat living in their barn. After two weeks, she was able to lure the cat inside her house.

Ron the Cat was back in the arms of Theresa Vincent Friday night, reunited after almost a month of being lost in Cumberland County.

Now, the Vincent family is preparing to get Ron back with his feline friend, Steve, and their son, Stephen, who is stationed in Pearl Harbor, HI, with the U.S. Navy.

“By the time he arrives, he will have logged over 1,700 miles on the ground and 4,300 air miles,” said Theresa. “He will also have gained many friends and a cheering section of hundreds, or thousands.

“We were simply blown away by all the kindness and help we found in Tennessee, and extend our heartfelt thanks to everyone who helped or simply offered a kind word. Everyone was wonderful, and in particular, we found that Crossville is a small town with a big heart.”

The story of this incredible journey began last year when Stephen was living in Virginia. He had adopted the two cats and wanted to take them with him when he received his orders.

But cross-country moves can pose challenges, especially when there are animals involved. Hawaii requires a number of vaccinations, tests and a quarantine period.

Stephen called on family and friends to help get the two cats through months of visits to the veterinarian and the paperwork necessary. By the time that was done, the pandemic had hit. Hawaii was on lock down and most airlines suspended pet transportation services.

Ron and Steve stayed with a friend in Washington, DC, over the summer, but a more long-term solution was needed.

Theresa and Wayne cut a trip to Arkansas short and drove to Washington, DC, in their RV to get the two cats. They would fly them to Hawaii as soon as possible.

As they were making their way back to their home in Austin, TX, to prepare for the next leg of the trip, they stopped overnight at Cumberland Mountain State Park.

“While taking the cats to our trailer for the night, a dog next door let out a loud bark,” Theresa wrote to the Chronicle. “Ron leaped from my arms and dashed into the woods.”

The next three days and four nights were spent walking around the campground, looking through the woods and passing out fliers trying to find Ron.

“We were amazed at how many people stopped what they were doing to offer encouragement, or asked us for an update every time we walked past their campsite, or offered suggestions, leads and tips,” Theresa said.

Other campers joined the search. People from Crossville tried to help. The park hosts, Gene and Don, served as contact points. They loaned the Vincents a live trap, as did Park Ranger Mark Houston, who offered his help and sympathy from the very first night.

“We started to feel like camp celebrities, although for a reason no one wants to be a celebrity,” Theresa said.

After three days, they had to bring their search to a close. There was a flight booked to Hawaii and they needed to be on it to take Steve back to their son.

Their daughter in Texas kept the search going, however, reaching out through social media. Soon, Ron’s story was shared over 1,500 times. Leads starting coming in about cats that might be Ron.

“Finally, over a week after he got lost, we got a strong lead from Jessica Cox, who lives near the park,” Theresa said. “There was an orange cat taking shelter in her barn, and the pictures she sent looked very promising.”

It took another two weeks before Cox called. She had managed to lure the cat into her house.

“He was pretty annoyed with her, but he was safe,” Theresa said.

Brown picked the cat up and had the microchip scanned, confirming the cat was Ron.

“We immediately put in a call to our son in Hawaii and shared the good news, just in time for Veterans Day,” Theresa said. “He was ecstatic.”

Theresa and Wayne came back to Cumberland County on Nov. 13, and picked up the cat.

Next stop, is Texas and then on to Hawaii, to complete Ron’s incredible journey.