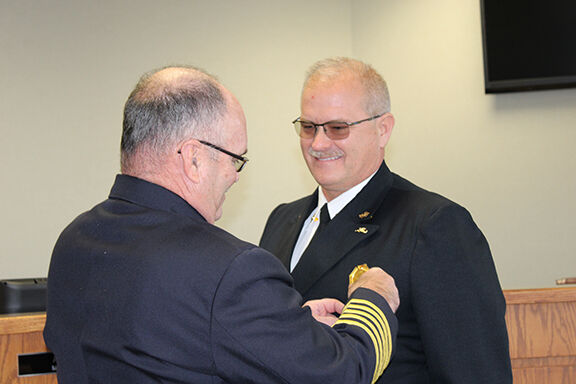 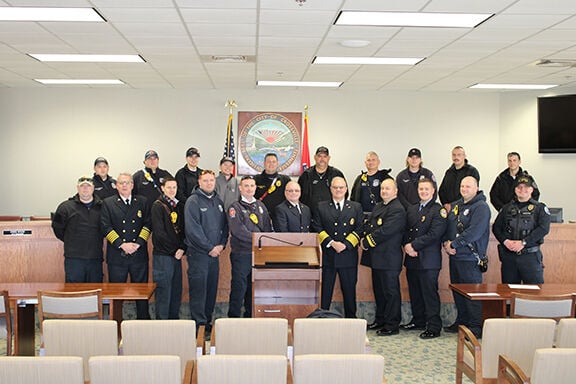 After 44 years of service with the fire department, Turner will act as deputy chief to Chief South until his official retirement, effective May 28.

Making it official, and even more special, Turner took the badge off his shirt and pinned South with it.

“I want his first badge to be my badge,” Turner said.

After the pinning and a bear-hug, South said, “This man has done more for me than I deserve, and I can never repay that gratitude, Boss.”

In attendance were South’s family– his whole family, including his parents, wife and children, and the fire department.

“We have a large family,” South said.

Turner mentioned that when South was 16, his mother brought him over to Turner and told him he wanted to be fireman.

Turner will be mentoring South until his retirement, although he said he doesn’t really need a mentor.

Turner said, “I trained him all his life, so if he does good…”

South said, “Chief Turner has, through the help of the council and city managers along the way, changed the face of the fire service as we know it in the city of Crossville. Every one in this room that works for the Crossville Fire Department was hired by this man. We are your legacy, Boss.”

Janet Raye Kluender, 49, of Crossville, passed away on Friday, Jan. 8, 2021, at Fort Sanders Regional Medical Center in Knoxville. She was born Oct. 17, 1971, in Crossville, the daughter of Larry Ray Bryant and Betty L. (Presley) Bryant. She is survived by her husband, Carl K. Kluender of Cr…

Jerry M. Beaty, 84, of Crossville, passed away Jan. 11, 2021. He was born Dec. 2, 1936, in Fentress County, the son of James L. and Lillian M. Young Beaty. He retired from the Tennessee Highway Patrol after 32 years of service, retiring as District Captain. He had always hoped to have as man…