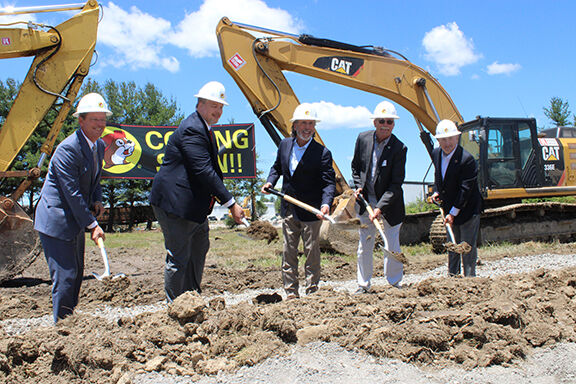 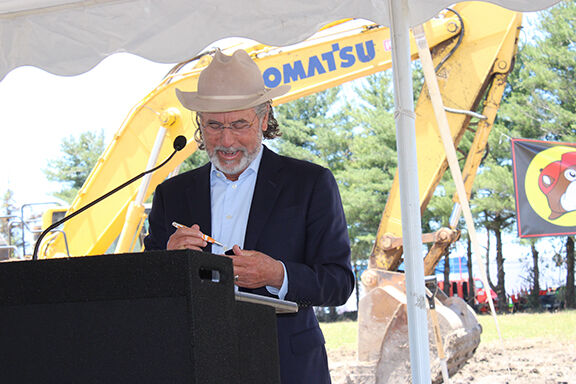 It was about two years ago when representatives of Buc-ee’s reached out to Crossville Mayor James Mayberry, proposing a 53,000-square-foot facility and 120 gas pumps at the Genesis Rd. exit.

“I was like, ‘120 gas pumps and 70 toilet stalls — and no trucks? This can’t be real,” Mayberry said Tuesday at the groundbreaking for Buc-ee’s first Tennessee location.

But Mayberry began researching the project. He talked with Cumberland County Mayor Allen Foster, who lives a short stretch down Genesis Rd. from the new site at exit 320. Over the next several months, they each made their way to Alabama where a new Buc-ee’s had opened.

“I learned what Buc-ee’s is all about,” Mayberry said.

Foster echoed Mayberry’s comments, saying, “Until you step inside a Buc-ee’s, you don’t get it … You sure can’t call Buc-ee’s a gas station.

“I was wrong. Mea culpa. This is a big deal, and we are extremely excited about it.”

Buc-ee’s operates 38 locations in Texas, where it was founded almost four decades ago. There, the travel center built a name for itself with clean restrooms, cheap gas, a wide array of food options, quality products and excellent service. Since then, it has opened travel centers in Florida, Georgia and Alabama, with locations under construction in South Carolina and Kentucky.

Crossville will be its first Tennessee location.

“It is a big deal,” said Arch “Beaver” Aplin, CEO of Buc-ee’s. “It’s a big project. It takes coordinated effort. For us, it’s particularly special if we can do a project in an area that improves what was here … I promise you, it’s going to be beautiful.

“We try to take care of the traveling public.”

Foster said his sister-in-law, who travels in Texas frequently, had talked about a travel center with a wall of jerky.

“This is the wall of beef jerky she’s been talking about,” he said.

Aplin said the company had been eyeing a location on Interstate 40 between Nashville and Knoxville.

“We’re excited about being on this interstate,” he said. “We searched for a great intersection with great visibility.”

Mayberry said, “I may be a little bit biased, but I think you couldn’t have picked a better location. We have people moving here from all over the country. Everyone talks about how hospitable the people of Crossville are and how helpful we are.

“It’s the same feeling I got from the employees at the Buc-ee’s in Alabama.”

“The people of Buc-ee’s are a happy bunch. We’re from the South, and we gravitate toward friendly people,” Aplin said of the Buc-ee’s employment team. “I don’t doubt that we’ll fit in just right in Crossville and in all of Tennessee.”

The project has not been without its challenges. The property on Genesis Rd. includes six parcels, including the former Hilltoppers site.

Hilltoppers has since completed a new facility on Duer Ct. on land donated to the organization by the city.

Aplin visited the new facility before the groundbreaking Tuesday.

“I hope they’re happy with the transition. I feel like it turned out just beautiful,” he said.

Several building have already been demolished, including empty buildings and an abandoned gas station.

“It was a pretty poor showing of our community to the many travelers who come through here,” Mayberry said.

Mayberry offered thanks to Randy Graham with First National Bank for his help with early work in the project to secure land.

Construction is ready to move forward, and Aplin said it should be ready to open in about a year.

Foster thanked Mayberry for his efforts to work with the company on their new Crossville location.

“There’s very few people locally who understand the effort you go through on projects like this,” Foster said. “I thank you. I appreciate you. You’re a great partner and a great friend. And he is very passionate if you ever talk to him about economic development.”

The project also required cooperation from the Tennessee Department of Transportation, with help from Speaker of the House Cameron Sexton and state Sen. Paul Bailey.

The city has been working with TDOT on construction of an improved road from Genesis Rd. to Hwy. 127, and there needed to be some modifications to make the project work with the planned development.

The city also closed Sweeney Dr. between Genesis Rd. and Stout Dr., with the right-of-way added to Buc-ee’s site, and it gave about 1 acre of property to the fuel center.

There will be a traffic signal coming to the intersection of Genesis Rd. and Stout Dr.