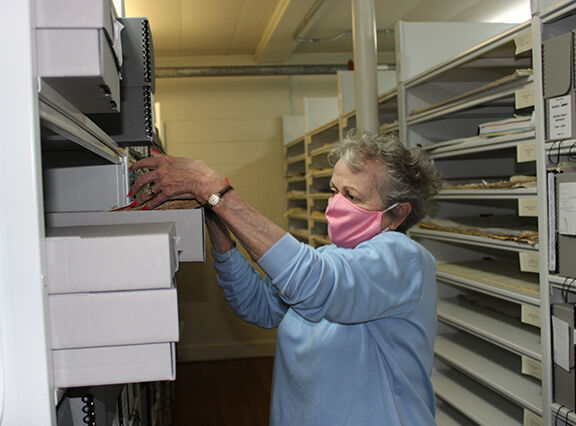 Archives volunteer Holly Clark returns a book of records to its place in the vault. She’s been working on indexing records so they can be searched electronically. 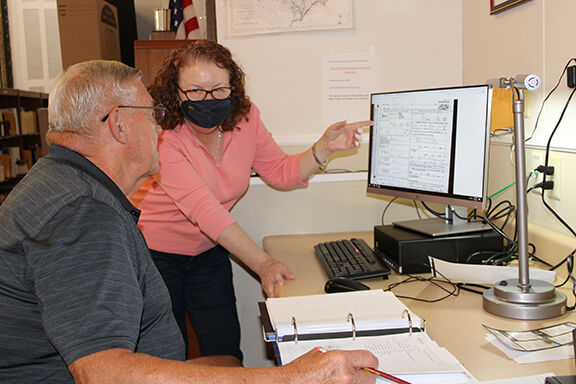 Mia McLelland, volunteer, helps Tom Rice navigate Ancestry.com on the Archives computer as he begins his genealogy research. The Archives provides access to a wealth of online resources to help people trace their family history. 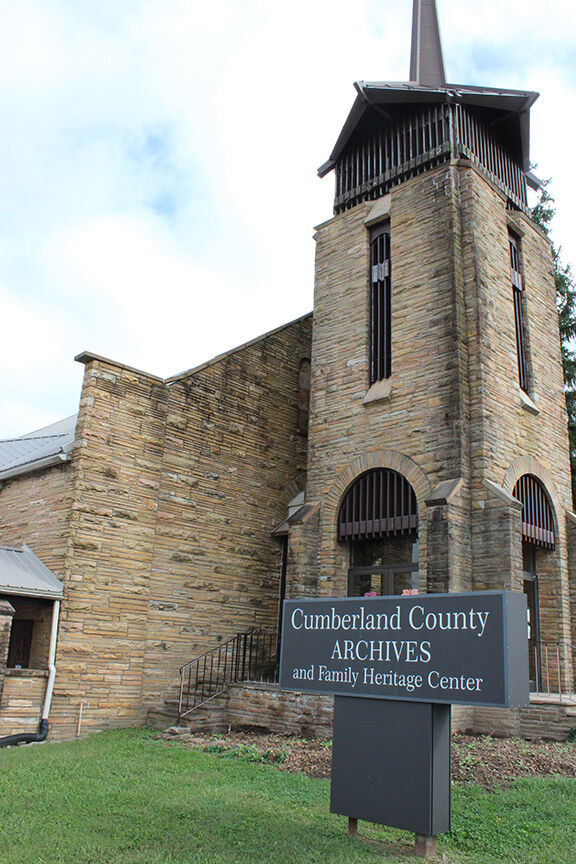 Archives volunteer Holly Clark returns a book of records to its place in the vault. She’s been working on indexing records so they can be searched electronically.

Mia McLelland, volunteer, helps Tom Rice navigate Ancestry.com on the Archives computer as he begins his genealogy research. The Archives provides access to a wealth of online resources to help people trace their family history.

County Archivist Joyce Rorabuagh's eyes were bright with excitement as she talked about the services and records kept at the Cumberland County Archives and Family History Center on First St.

The collection is now up to 4,000 books on genealogy. There's a large collection of microfilm and microfiche records and historic newspapers from the region. More map cases are coming to hold larger items, like the building plans for Crossville Elementary.

Soon, she hopes, the collection of county records -- deeds, business licenses and marriage licenses -- will be moved from the vault to a temporary storage space in the basement of the historic church-turned archives, and a new workspace built where a three-story addition to the former church building now stands.

The $1.6 million project cleared one hurdle last week when the building and grounds committee voted to send it to the county's budget committee for consideration.

If approved by the county, work could begin early next spring and be complete in early 2022.

"There were a couple of things that were tricky to deal with," Kim Chamberlin with Upland Design told the panel Thursday.

Those items included hazardous materials removal and demolition of the structure. The building has asbestos and lead-based paints that must be contained before it can be torn down, preserving the older, original part of the building.

"Like a lot of construction at that time, it is not in as good of shape as the original building," he said.

The three-story portion of the building has been plagued with issues including leaking roofs, faulty plumbing and accessibility issues. It also doesn't offer the secure, controlled environment necessary to keep records — some more than 100 years old — in good shape.

The county is required by the state to maintain these historic records and, when allowed, make them available to the public.

Kim Chamberlin and Kevin Chamberlin worked with Rorabaugh to design a two-story structure that will avoid the need for an elevator and provide room for future growth. It will sit in the footprint of the current facility, with about 7,120 square feet.

The bottom floor will have separated storage space other county departments can utilize as necessary. The top floor will be dedicated to archival storage and a workroom.

"Everybody's going to be on the same floor," Rorabaugh said. "We just have closet space now where we're trying to process the incoming collection."

Both floors will have restrooms, avoiding the need for an elevator. Those will replace existing restrooms. Because both floors would be accessible through separate entrances, it would not need an elevator. The public would also not need access to the basement, Kim Chamberlin said.

"The plumbing is pretty well shot," Kim Chamberlin said. "We're proposing putting restrooms in the new part of the building and not retrofitting the old restrooms."

The workroom will have small windows to allow some natural light into the building, though not so much to jeopardize record preservation. The vault could eventually use high-capacity shelves, though that is not part of the initial project. However, the tracks for these shelves can be installed during construction to provide for that enhancement later.

There will also be a room where the public can view records.

An existing utility pole will be relocated, simplifying the demolition process.

Rebecca Stone, 3rd District commissioner, said the county's debt service can absorb the cost of construction, to be paid back over time from the proceeds of a records fee. The county collects a records fee dedicated to the preservation and storage of required records.

"The budget committee could decide how much each year would be allotted to paying that back and the rest to take care of the building," Stone said. "It could be paid back pretty quickly."

The archives is staffed by volunteers, at a savings of about $30,000 each year, Rorabuagh said. The new facility will not increase staffing needs, she said.