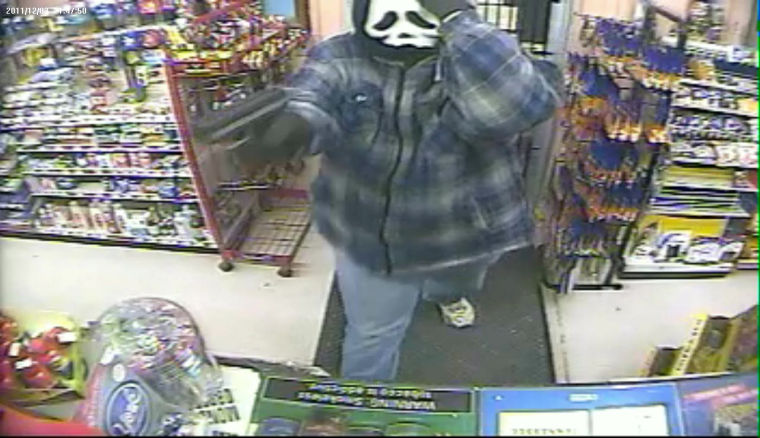 The suspect is seen pulling a handgun and putting it in the face of the clerk. 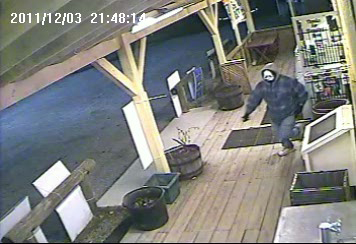 The suspect is seen fleeing immediately after the hold-up.

The suspect is seen pulling a handgun and putting it in the face of the clerk.

The suspect is seen fleeing immediately after the hold-up.

An angry robber impatient over the amount of time it was taking to gather up money to hand over to him thrust a gun in the face of the clerk on duty and cussed the young woman before fleeing from the scene.

The armed robbery took place shortly before 9 p.m. Saturday at the Mayland Market on Hwy. 70 N., according to Cpl. David Bowman's report. A 24-year-old Crossville woman was the only employee on duty.

The clerk told Bowman and Sgt. Rick Lanzilotta that she saw a man wearing a "Scream" movie mask, grey T-shirt and dark colored hoodie pulled over his head walk into market, approach the sales counter and demand money from the register.

The clerk said she asked the man holding a gun on her to calm down that she would get the money. The assailant then became angry and started cussing the clerk, according to the report, and thrust the gun in her face.

At that time, the robber grabbed the cash register, turned it around and opened it, taking all the $10 and $20 bills. He then fled from the store, running behind the building. The clerk was shaken but otherwise uninjured.

While no vehicle description was given to investigators, a witness observed tail lights and heard a vehicle leave from behind the store.

Sheriff's Investigator Jerry Jackson was also called to the scene and investigation into the incident is continuing. Anyone with information about this suspect is asked to contact Jackson at 484-6176.