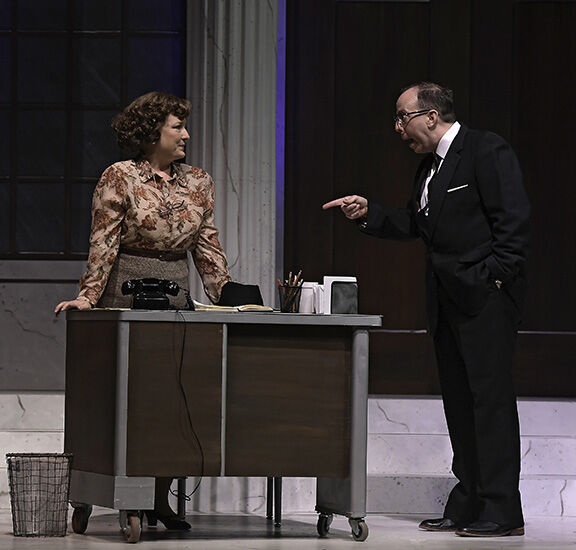 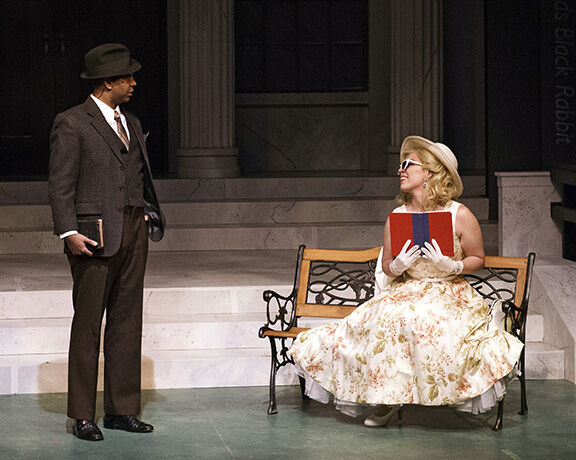 Author Garth Williams once described his children’s book “The Rabbits’ Wedding” as “a soft, furry love story” with “no hidden messages of hate.”

But the book set off a firestorm in 1950s Alabama, as adults thought it was promoting integration in the deep South.

This story comes to life at the Cumberland County Playhouse with their new production of “Alabama Story.”

“It’s a powerful story that needs to be told,” said Bryce McDonald, producing director. “I could not be prouder of a piece of theater.”

McDonald first came across the play more than a year ago when the Southeast Theater Conference published a review, calling it “one of the greatest Southern plays in 20 years.”

He was intrigued. Stories related to the South are traditionally a hit with Playhouse audiences. As he delved into the story — a retelling of true events contrasted with a fictional personal story — he decided Alabama Story was an important story to tell.

No one could know just how timely that story would be.

Author Williams had illustrated beloved children’s books like “Little House on the Prairie,” “Stuart Little” and “Charlotte’s Web.” An author in his own right, Williams presented the tale of two rabbits who live in the forest and have adventures. One rabbit confesses to the other that he wishes she would stay with him forever. She accepts and they celebrate with a wedding, dancing with the other forest creatures.

Titled “The Rabbits’ Wedding,” the book was published in 1958. In Montgomery, AL, a state lawmaker believed the book had a secret message of integration and interracial relationships, because one bunny was white and the other was black.

“It’s two characters with strong wills,” McDonald said. “Reed tried not to get involved, but ultimately, she has to take a stand.”

Playwright Jones changed the name of the lawmaker involved in the controversy, but he received permission from Reed’s family to tell her story. Weslie Webster plays Reed and Jason Ross plays Higgins.

The fictional story centers on two childhood friends, Lily Whitfield, played by Hannah Hays, and Joshua Moore, played by Michael Ruff, who meet as adults in Montgomery. She is from a well-to-do white family. His mother once worked for her family as a domestic employee. They had been the best of friends as children, but something happened to make Joshua and his mother move away.

Now, he was back in Alabama working with the Civil Rights movement.

Britt Hancock plays Williams, who serves as the play’s narrator and takes on the role of individuals interacting with the main chacters.

McDonald said the script was “beautiful.”

“The actors all said, ‘It’s easy when the script is good,’” he said.

As they worked through rehearsals, all were impacted by the emotion and themes of the story. Some of the younger cast members, who had not grown up in the South, marveled that the circumstances depicted had taken place just 60 years earlier.

“There were eye-opening conversations,” McDonald said.

It wasn’t uncommon for rehearsals to result in everyone in tears.

McDonald described the play as a story about parents and the legacy they leave, the innocence of children, and how it can be possible to find common ground.

On opening night, a family with three generations came to see the show. The youngest was perplexed by segregation, like a sign signifying an area was for “Whites Only.”

A patron sent a note sharing how the play revived memories of living in Montgomery during this turbulent time.

The next night two groups, strangers before the show, spent the intermission sharing their experiences. When the show ended, they were in the lobby together, taking pictures and talking.

“In this time of division, how great is it to see people come together,” McDonald said. “That’s the power of theater.”

Alabama Story is showing in the Adventure Theater through Nov. 14. Only 80 seats are available for each performance to ensure patrons can safely socially distance inside.

“It’s a powerful show. I wish we could sell it out,” McDonald said. “If we’ve done our job, people will walk away having discussions they’ve not had in a long time.”

The show is rated PG due to the subject matter discussed. The Playhouse will kick off its holiday season Nov. 13 with A Sanders’ Family Christmas, followed by Every Christmas Story Ever Told (And Then Some) on Nov. 20.

Sanders Family will bring back the cast from the summer performance of Smoke on the Mountain for a sequel filled with great gospel holiday music.

Only 115 tickets will be available for each performance.

In Every Christmas Story, folks can expect to laugh the night away.

“We’re having way too much fun,” McDonald said of the rehearsals currently under way.

In this holiday comedy, a theater company is getting ready to stage a production of A Christmas Carol — again. But one of the actors decides he just can’t do the classic holiday play one more time, and the rest of the cast agrees — even if one is reluctant.

What follows is a series of skits McDonald said was reminiscent of a Saturday Night Live episode, such as a three-minute Nutcracker, a Fruit Cake Dating Game, and The Wonderful Carol.

Only 80 tickets will be available for this production per show.

Tickets can all be ordered online at ccplayhouse.com or by calling the box office at 931-484-5000.

John Kemmer Young, 79, of East Ridge, TN, passed away Tuesday, Nov. 24, 2020, at Standifer Place in Chattanooga, TN. He was born April 8, 1941, in Crossville, son of the late George Dean Young and Lena Jane (Kemmer) Young John worked for Dupont as a control operator. In addition, he was a me…

Joseph Logue McNutt, 95, of Crossville, passed away at home on Nov. 23, 2020. He was born on March 11, 1925, in Uniontown, PA, son of the late Joseph Russell McNutt and Kathleen (Logue) McNutt. After serving his country in the Army during World War II and being awarded a Bronze Star, Joe wor…