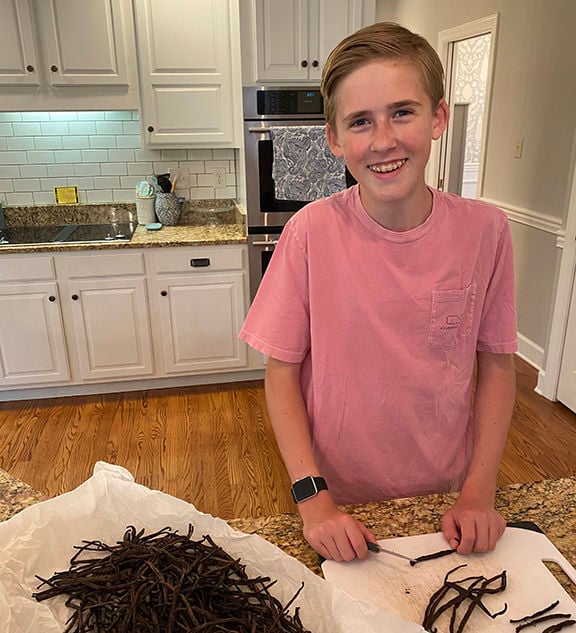 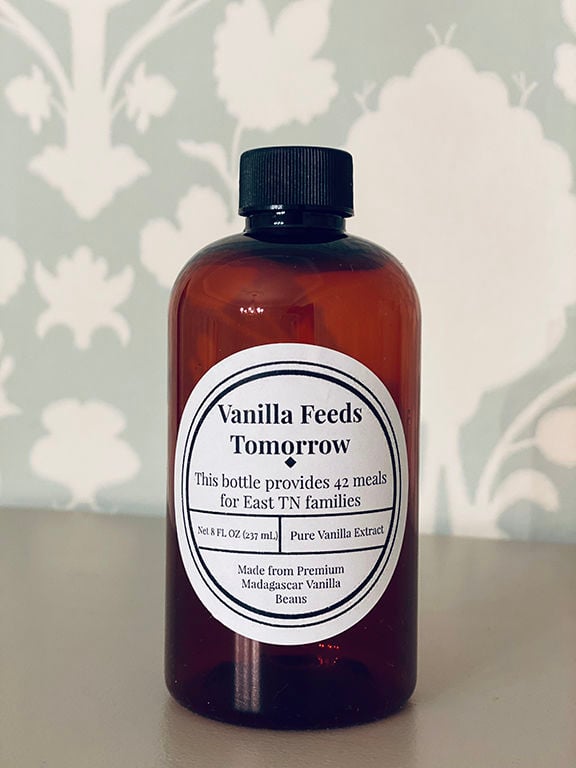 Cabaniss has raised over $4,000, which translates into over 12,000 meals for the hungry in East Tennessee.

Cabaniss has raised over $4,000, which translates into over 12,000 meals for the hungry in East Tennessee.

Crossville native William Cabaniss loves the flavor of vanilla and wants to help people. He may only be 14-years-old, but he’s already a budding philanthropist having recently launched his own non-profit organization, Vanilla Feeds Tomorrow.

The impressive young man, the oldest of three siblings, was at home in Knoxville during the mandated COVID-19 quarantine making vanilla brownies when he heard on the news that food banks were struggling to meet the needs of the families due to furloughs and closures.

“I started it very recently when I realized food banks in East Tennessee were severely depleted. They had very low supplies,” Cabaniss said. “People were getting laid-off and couldn’t afford food.”

He came up with the idea that he could employ his love for vanilla to make a positive difference in the lives of others and help struggling families. He decided to start a non-profit organization in which he would make homemade vanilla extract for supporters to purchase, the proceeds of which to be donated to Second Harvest Food Bank of East Tennessee.

Cabaniss researched the reach of Second Harvest Food Bank of East Tennessee and was particularly impressed with their mile-long list of food banks and organization it supports in the area.

“One reason I chose this food bank, because it benefits so many charities in East Tennessee,” Cabaniss said. “My current residence of Knoxville and my hometown of Crossville and all these other counties benefit from this one place.”

He had actually made plans to volunteer at Second Harvest Food Bank of East Tennessee over spring break this year, but it was canceled due to COVID-19. So he came up with another way to offer support.

“This is a way I can help. It just hit me that I could sell vanilla extract and help people out. It just clicked,” he said.

He began researching how best to make homemade vanilla extract, the grade and kind of vanilla beans he’d need, suppliers, vendors as well as packaging and shipping methods.

“So far our feedback is really good,” he said candidly, “so I’m guessing we’re making it right.”   He is also learning a lot about how businesses work. His family is very supportive of his efforts. His parents, Jillina and Mark, invested in his vision and provided starter funds to create his corporation. His dad also helped register with the state and IRS, and apply for 501©3 status.

“I’m just 14, I don’t really understand all this business stuff,” he said. “But everything else has been pretty much just me.”

His grandmother, Janice Plemmons-Jackson, manages the Vanilla Feeds Tomorrow Facebook page and his siblings offer to help with packaging and other tasks. His mother does the driving.

Once he found a recipe and bought his initial supplies, he has worked diligently learning how to make, bottle and ship the vanilla extract, as well as learn about customer relations and business administration. He also designed his logo and website.

In the organization’s first week, Cabaniss raised over $4,000, which translates into over 12,000 meals for the hungry in East Tennessee. In just one short week, Cabaniss was able to report, “We’re self sustaining.”

“It can come back into Cumberland County to benefit this area and a lot of other surrounding counties,” Plemmons-Jackson added.

Each dollar donated can provide three meals to people in need.

“You don’t have to buy vanilla, but you can still support people,” he said.

Those who wish to support the food bank through his organization, but don’t necessarily want to buy vanilla may choose a meal donation purchase.

Those ordering vanilla extract may have it shipped, but he also offers local deliveries to Farragut and pick-ups in Crossville.

“In school, I’ve had a lot of classmates that didn’t always have food and I wanted to help. As a kid, I would go to a local food pantry here in Crossville. They couldn’t always get fresh fruit, so I would donate bananas. I would bring allowance money to help support them,” he said. “I’ve always wanted to help food banks and they really are experiencing a time of need, so it’s just really satisfying to help give back and it’s nice to know I can help people.”

He makes a batch of extract every week and has staggered the batches so he’ll have one ready to ship out every two weeks.

He’s already got batches of vanilla extract curing for the Christmas season.

“Helping replenish East Tennessee food banks and helping to feed the hungry is an important goal of mine,” Cabaniss said. “I just want to help as many people as I can and raise as much money as I can.”

James Ewing Beard, 72, of Crossville, passed away Saturday, Nov. 14, 2020, at Cumberland Medical Center. He was born Nov. 14, 1948, in Nashville, son of the late Harry Maxie Beard and Mary Lucy (Hiser) Beard. James worked as a truck driver for Kroger. He was a loving husband, father, grandfa…

Dorothy Oakes died peacefully in her home on Nov. 13, 2020. She was born Dorothy Wanda Walling in Bledsoe County on June 13, 1935, the youngest child of Jessie and Sara Walling. She was preceded in death by her sister, Beulah Webb; and bothers, Everitt, Ulysses, Carlos and TJ. She and her hu…