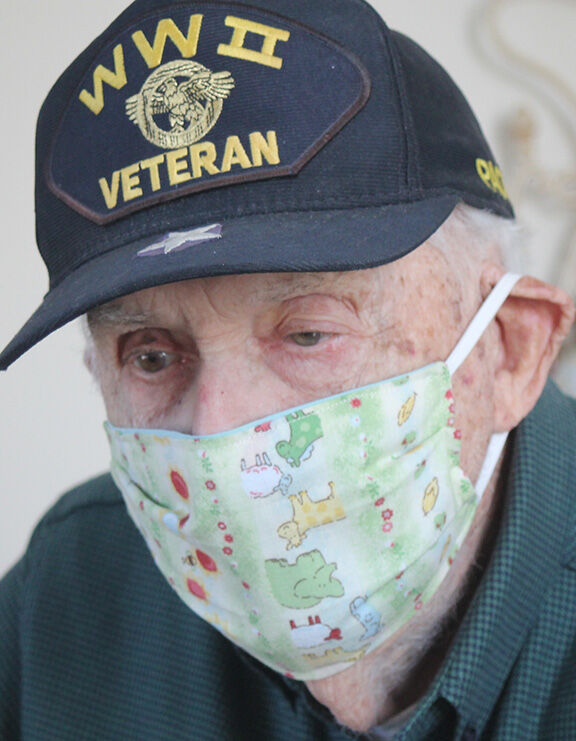 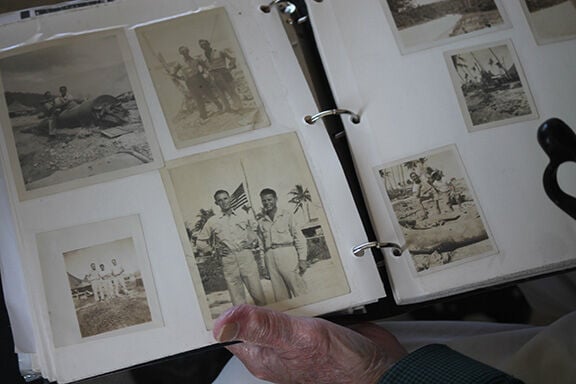 Al Rogers of Pleasant Hill looks through photos of his service in the U.S. Army during World War II. 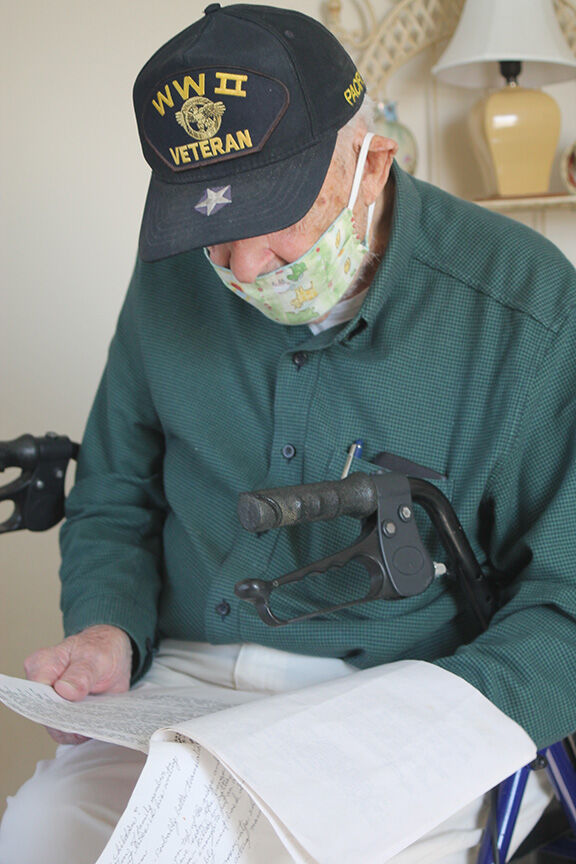 Al Rogers of Pleasant Hill looks through photos of his service in the U.S. Army during World War II.

Al Rogers, by his own admission, did not grow up in a happy home. “I came from a broken family,” the 98-year old WWII Army veteran recalled last week. An only child, Rogers’ father abandoned him and his mother when Rogers was a young child.

Drafted at the age of 20, Rogers was assigned as a special weapons soldier in the Army of the United States, the AUS designation distinguishing draftees and newly enlisted from the veterans who were U.S. Army soldiers.

The great war led him to a tiny island in the Pacific. Decades later, when asked the one thing he has taken from being a soldier in a combat zone, Rogers said without hesitation, “I grew up. I was a man.”

Rogers was born Aug. 5, 1922, in Walter Reed Hospital in Washington, D.C. His ties to East Tennessee were through his father who had roots in Spring City. The family moved to Philadelphia, upstate New York and he and his mom eventually ended up in Chattanooga.

Rogers was working at JC Penney and going to night school at the University of Chattanooga when he was called to service. He was inducted at Ft. Oglethorpe outside Chattanooga and took rifle and anti-aircraft training at Ft. Sheridan in Illinois.

Traveling by troop train to San Francisco, Rogers was among 5,000 soldiers shipped across the Pacific to Sydney, Australia, where he spent 17 days. By train the troops were moved to Brisbane and camped in horse track facilities as they were readied for action in New Guinea.

About that time a new weapon was released to the Army, delaying his deployment while training on the new weapons took place. The anti-aircraft guns were electrically operated, rested on trailers and featured for barrel guns.

“They were deadly to low flying planes,” Rogers remembers.

In April 1943, Rogers and fellow soldiers were shipped to Pinchion on a freighter and then moved with the 186th Infantry with the 2nd Battalion of the 1622nd infantry attached

He was in the fourth wave of the invasion with orders to protect troops from Japanese Zero attacks.

Purpose of the invasion was to take two Japanese airstrips and use them for allied planes in the invasion of the Philippines. The site was on Biak Island in what is now Indonesia.

It was the first major effort by the Japanese to allow uncontested landings with the purpose of crating a kill zone island. On top of that, U.S. Intelligence had estimated the Japanese force on the island to be 2,000 troops. It turned out to be a gross underestimate.

The island was held by 11,400 Japanese troops, many who were hidden in a honeycomb of caves on cliffs that overlooked the only road to the airstrips from where Rogers and his fellow soldiers came ashore.

It took the dropping of large oil drums into the caves by the Air Force followed by strafing that set the drums on fire to rout the enemy from their hiding places. Still, many Japanese hid in groups in the jungle and had to be hunted down on foot.

“I thought it was odd there was not a lot of resistance when our soldiers landed,” Rogers said. He later learned that the only Japanese soldiers at the air strips were supply soldiers and a few guards.

Once the cliffs were cleared of snipers and mortars, Rogers and his unit were moved into position to provide protection from Japanese attacks.

“Because of the weapons we had, the Japanese would only attack by air at night, on full moon nights,” Rogers remembers. “They would fly 300 miles to bomb us.”

Under the protection of anti-aircraft guns, the airstrips were made ready for B-24s and F-38 planes “built for the Pacific.”

Rogers remained on duty throughout the Battle of Biak to the end of the war. The battle took place on May 27, 1944. Casualties included 22 killed, 14 missing and 68 wounded. As the war continued, 7,234 non-battle casualties were recorded, most from scrub typhus.

The Japanese troops fought to annihilation with 4,700 killed and 200 captured. The remainder died from starvation and disease.

After ground hostilities cooled, a U.S. reconnaissance team surprised a camp of seven emaciated Japanese solders. All were killed. While searching the camp, an American soldier found a diary and writings on the back of food container labels that was brought back to the States.

“I didn’t know anything about the diary,” Rogers said. “We used to have a reunion every year and about 12 years after we returned from the war, the diary and a translation was brought to one of the reunions.”

The writings still bother Rogers. A 27-year-old Japanese infantry captain had written the poetry and prose and in it the solder laments that he fears of going mad and dying on the island and his two sons and family never knowing what happened to him. (Please see accompanying story.)

“But, someone does know what happened to him. It was his enemy,” said Rogers. “We were always told the Japanese were dogs and an uncivilized enemy. I could tell from the diary this was a well educated man who was fighting for his country just like I was.”

Rogers has attempted to locate the two sons without success. “I would go give them a copy (of the translation) if I could locate them.”

Finally and with little notice, word reached the island that the war was over. “We waited five months for a ship to come and pick us up. Don’t get me wrong, it was an island, lots of sand and ocean, a nice place, but we wanted to go home.”

It took 17 days traveling through “a terrible storm” before he and his fellow soldiers arrived in San Francisco.

“We were told that at 7 a.m. we would be passing under the Golden Gate bridge so I got up early. It was so foggy you could see nothing, but suddenly, there it was right above us. The Golden Gate bridge. I was amazed, and still am, at the skill of that captain to navigate that transport through the fog and under the bridge without hitting anything.”

He returned to college and after studies at The University of Tennessee and working at prestigious hospitals in the northeast, Rogers returned to Chattanooga and opened up a physician/surgeon practice where he worked for 40 years.

Rogers didn’t have to endure hand-to-hand combat. He didn’t have to stare down the barrel of the enemy’s gun. He did have to face Japanese Zeros flying in a tree-top level intent on destroying him and his fellow soldiers.

And he became a man.

Excerpts from a Japanese soldier’s diary

A Japanese infantry captain, along with six other soldiers, were killed by a scouting party of U.S. soldiers outside Biak, Western New Guinea, a 50-mile long island located near the Philippines. It was strategic as a fueling depot for U.S. and allied planes during WWII and was where Al Rogers of Pleasant Hill was stationed.

When the Japanese camp was taken by the U.S. soldiers, a diary and writings on the back of labels taken off ration containers and cans were found.

Writings in the diary included the following poem and excerpts:

Butterfly, why are you so silent?

Just about the time the sun rises up in the valley,

you always appear from nowhere,

Although you spread your wings at times,

you come to stop and remain silent.

You fly here without any sound:

May I ask where is your home?

Crossing over that valley and then the next,

’til you reach a cedar tree in a wide field

Why a butterfly has flown by,

Its toward the evening and the insects hissing.

The rats and eagles are beginning to appear

You do not go home right away

your folks will start to worry.

In another entry, the Japanese officer wrote, “I live now only to await the day of attack by our friendly forces. While waiting, I am encountering many hardships. Are our Japanese corps in safe hands? Our regimental headquarters and comrades?

“I can only hope they are all well, even today, enemy planes are flying and their sentries are firing I cannot close my eyes and sleep. I pass each day in this manner. I believe our friendly forces will attack in December and Japan will win.”

Another entry is written on a wrapper of Alpine sweetened condensed milk with the following comment, “This milk is very good. It was found by Sup. Pvt. Kurimura beneath some leaves one morning. He returned without finding any bread. The next time we will find some at all costs.”

Other notes were found on labels torn from cans of Del Monte yellow cling peaches.

Another note states, “There are seven of us remaining. I wonder what has happened to the others. Must one suffer so much in order to live?”

The captain writes about his two sons and his family back in Japan. He expresses the fear that he will perish in the war and no one will ever know what became of him. He fears he will go mad.

Rogers said it was a bit ironic that the ones who know his fate were his enemies.

“We were taught the Japanese were dogs but I understand after reading his diary they were educated men, just like us, just fighting for their country.”

Rogers has made attempts to learn the identity of the Captain’s sons so he can send the writings along with where he perished to let his family know, but has not been successful in locating them.

James Cleveland Elwood, 83, of Fairfield Glade, passed away Friday, Nov. 20, 2020, at Cumberland Medical Center in Crossville. He was born on March 3, 1937, in Key West, FL, son of the late Ray Owen Elwood and Martha Louise (Brady) Elwood. He worked for the U.S. Navy Civil Service as an arch…

Melissa Ann Taylor, 42, of Crossville, passed away at home on Friday, Sept. 25, 2020. She was born on March 20, 1978, in Dearborn, MI Melissa worked as a receptionist for Holiday Inn for many years. She will be truly missed by all of her family and friends. She is survived by her husband, Ma…