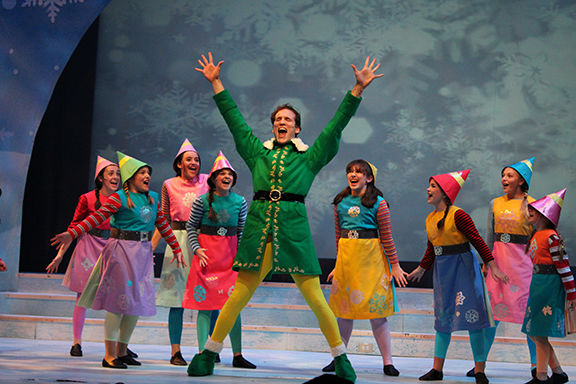 The best way to spread Christmas cheer is singing loud for all to hear! Buddy the Elf (Chris Hallowes) sings with the North Pole elves. 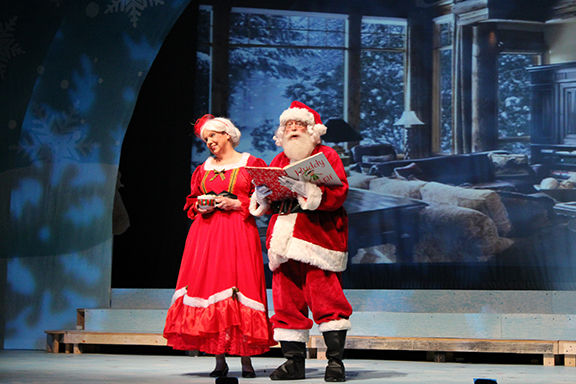 Mrs. Claus and Santa (Patty Payne and Bill Frey) tell one of their favorite Christmas stories, the story of Buddy the Elf. 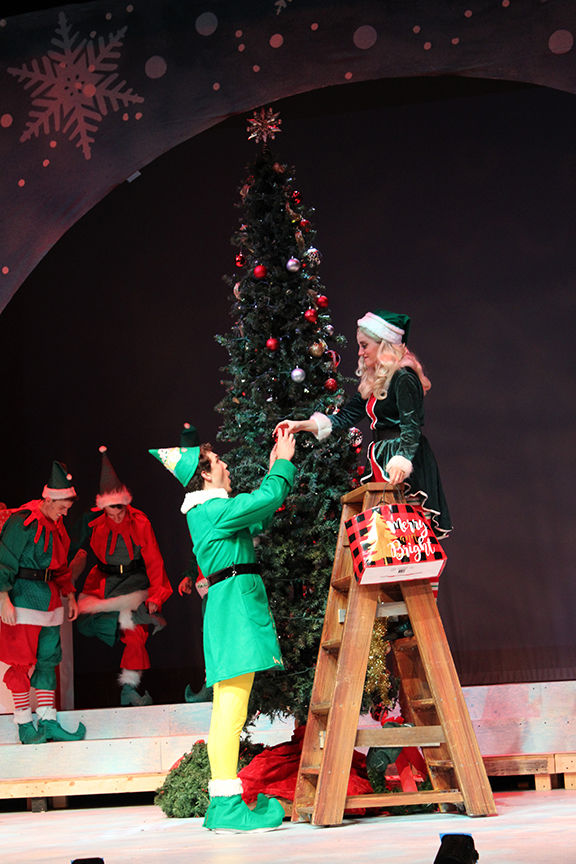 Buddy the Elf (Chris Hallowes) meets Jovie (Jess Griffin) and helps decorate the Christmas tree to get ready for Santa. 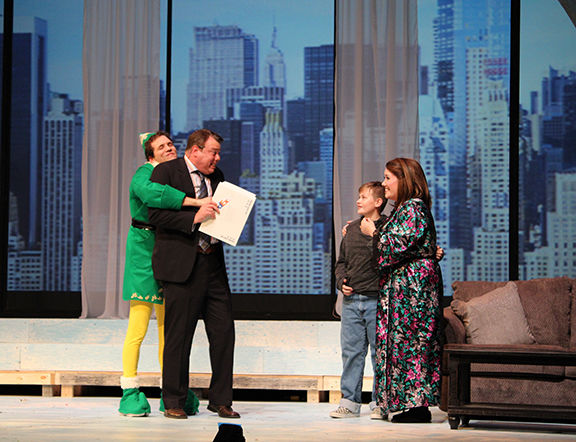 The best way to spread Christmas cheer is singing loud for all to hear! Buddy the Elf (Chris Hallowes) sings with the North Pole elves.

Mrs. Claus and Santa (Patty Payne and Bill Frey) tell one of their favorite Christmas stories, the story of Buddy the Elf.

Buddy the Elf (Chris Hallowes) meets Jovie (Jess Griffin) and helps decorate the Christmas tree to get ready for Santa.

Don’t have any Christmas spirit? Uh-oh, sounds like somebody needs to sing a Christmas carol!

The magical thing about Christmas is everyone has the opportunity to be Santa Claus and bring inspired joy and wonderment to the world. Cumberland County Playhouse is doing their part to spread the sparkle-jolly, twinkle-jingly Christmas spirit with their production of “Elf the Musical,” which opened Friday and runs through Dec. 21.

The musical begins on Christmas Day and Santa, played by Bill Frey, tells one of his favorite stories, the story of “Buddy the Elf.”

Buddy, played by Chris Hallowes, is an unusually tall elf in the North Pole with he accidentally finds out he is actually human. Buddy embarks on an adventure to find his biological father in New York City and live among the humans.

At first, he isn’t well received in the city. A true fish out of water, or rather elf-out-of-the-North-Pole scenario, takes the musical to hilarity. Despite the attitudes and priorities of some of the city-folks, Buddy stays true to him’elf. He is different, but in a good way; ever joyful, optimistic and shakes the city like a snow globe with his unfailing Christmas spirit.

Hallowes is an energetic fount of Christmas cheer, bubbling over with sincerity, honesty and innocence as the perfect depiction of Buddy’s character. Hallowes makes the production so much fun to watch as he plays Buddy finding his family, working at Macy’s, getting in a fight with a fake Santa, making trouble for his dad at the publishing office and falling in love. Eventually, his sincerity begins to rub off on those around him and he makes friends everywhere he goes.

When Macy’s store manager, played by Michael Ruff, mistakes Buddy for one of their department store elves, he helps the employees decorate for Santa and get into the Christmas spirit. This is also where Buddy meets Jovie.

Jess Griffin plays Jovie, Buddy’s love interest who has been disappointed more than once, who rolls the dice on an elf who is nice. Griffin is so relatable as Jovie. When Buddy tries to get her to sing along and “spread Christmas cheer by singing loud for all to hear,” Jovie claims she doesn’t sing. But, when she does, it is wonderful to listen to Griffin’s voice ring like a silver bell on stage.

Making bellies shake like bowls full of jelly, Hallowes is a riot when Buddy gets into a fight with a “fake” Santa, played by Grayson Yockey.

Emily and Walter Hobbs, Buddy’s human parents, are played by Lauren Marshall and Britt Hancock. They assume the roles so easily it’s like they were written just for them. Emily is the supportive mother who tries to advocate for their son, Michael, to Walter who is a workaholic. Matt Patton and Altaire Zentgraf are double cast as Michael, Buddy’s brother, who just wants one day with his father.

With a sweet, accepting heart like Buddy’s, Walter’s secretary, Deb, is expertly played by Weslie Webster, who is so pretty she really should be on a Christmas card.

It must be said, while all the scenes are super fun to watch, the clincher for the audience to decide to be less “Grinchy” is when the men’s ensemble is all dressed as department store Santas and performs “Nobody Cares for Santa.” The talented men explode on stage for this highly energetic number.

Magical things happen when you believe. Eventually, Buddy makes believers of them all and teaches everyone what is truly important. Buddy not only manages to save his father from the Naughty List, but Christmas itself.

From Christmastown to New York, “Elf” is a treat for the senses.

Nothing will cure your “bah-humbug” like a big elf-ing hug. Shows are filling up quick, so get your tickets now, have a wonderful time watching the show and, “…to finish we’ll snuggle.”

Call the Playhouse box office at 484-5000 or visit ccplayhouse.com for show and ticket information.

Excited adults and children waited in the audience and backstage for the opening music of the prelude to ELF-The Musical. As the curtain rose,…