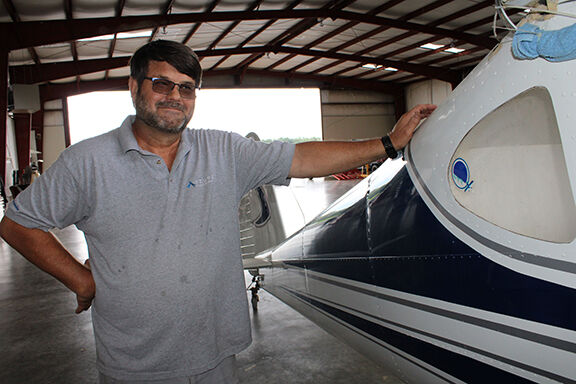 Crossville Memorial Airport’s Azure Flight Support airport manager Greg Livingston was hopeful for the Cessna 120 project but looks forward to seeing another project to work on for the Tennessee Aviation Hall of Fame. 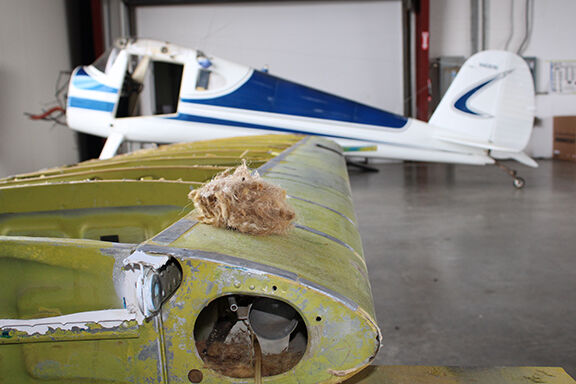 Rat nests in the fabric wings of the 1947 Cessna 120 was only one of the issues that thwarted the restoration project for the Tennessee Aviation Hall of Fame.

Crossville Memorial Airport’s Azure Flight Support airport manager Greg Livingston was hopeful for the Cessna 120 project but looks forward to seeing another project to work on for the Tennessee Aviation Hall of Fame.

Rat nests in the fabric wings of the 1947 Cessna 120 was only one of the issues that thwarted the restoration project for the Tennessee Aviation Hall of Fame.

Crossville Memorial Airport’s Azure Flight Support team was thrilled when they received the news that the Tennessee Aviation Hall of Fame selected them to restore a 1947 Cessna 120. The honor to be chosen is a testament to the team and would be all-volunteer labor.

Azure Flight Support team jumped at the opportunity and went to Mississippi to pick it up.

Deemed as a “lightplane” indicative by its stature, weight and sleek design, the Cessna 120 and its bigger brother, Cessna 140, were produced post World War II, between 1946 and 1951; the Cessna 120/140 with fabric wings and the Cessna 140A, introduced in 1949, with all-metal wings and redesigned instrument panels, electrical systems and increased fuel capacity.

They are a rare and beautiful collectible sky gem, so when the opportunity to buy and restore a Cessna 120 presented itself, TAHF bought it and selected the fixed-based operators of Azure Flight Support at Crossville Memorial Airport for the project. They just don’t make them like they used to. And they certainly don’t make these Cessna models anymore.

“It was a really cool idea and it was an honor for the Hall of Fame to come to me,” said airport manager Greg Livingston. While he manages the airport, he primarily performs maintenance on the airplanes. In his 40-year career as an airplane mechanic, he has restored around a dozen airplanes.

TAHF is a non-profit foundation established to recognize leaders of aviation in Tennessee whose avionic service and achievement perpetually contribute to the state, nation and world. TAHF bought the Cessna with the intention of having it restored by Azure’s maintenance team at Crossville and returned to the Hall of Fame for them to auction it off and raise money for their non-profit organization.

“It’s kind of one of those things where you do it for the love of aviation,” Livingston said of the honor to be chosen to restore the Cessna 120. They had high hopes that their vision of this phoenix rising from the ashes could come to fruition.

As far as the Cessna’s assessment, she has good bones and the fuselage is in decent shape. Unfortunately, the project lost altitude when Livingston began taking the aircraft apart to ascertain its needs. Like tearing wings off a butterfly, the Cessna was disassembled, her engine, wings, doors, seat and parts all stowed away in a storage room the hanger.

Livingston and the team came to a disappointing conclusion and had to make a difficult decision. The aircraft’s needs were disappointingly extensive and exceeded the scope of TAHF’s project budget.

Among other issues such as missing engine components, rats had nested in her aged and tattered original 1940s fabric wings. It was as though the butterfly’s wings had been handled, damaging her patterned powder, and, though she wanted to, she could no longer take flight.

Livingston and the Azure team had wanted more than anything to be able to return her to glory.

“Poor baby girl,” he said. “Really, it’s such a beautiful airplane as far as the lines of it and the condition of the fuselage is very good.”

The team deduced that the Cessna 120 needed an estimated $50,000 in parts and about 1,000 hours of labor to complete the restorations. Livingston said not only did they not have the budget for the project, they just didn’t have the all-volunteer man-power for the labor the project would require to “get it back to the level of an airplane that we would want to give back to the Hall of Fame.”

Livingston plans to list the Cessna 120 in Trade-A-Plane to help TAHF recoup their money and find another project to restore for them.

He said. “It made more sense to stop on this one and find something that was in better shape.”

If at all possible, they would like someone who would purchase the aircraft as a whole.

“That would be our hope,” Livingston said about bringing her back to life and giving her back her wings. “This [project] would be for somebody to keep in their garage and work on it on Saturdays and slowly get it coming back together. There are those kinds of people that are out there.”

Going forward, the Azure maintenance team will work towards selling the Cessna 120 and finding another project that would be more feasible to restore to give back to the Hall of Fame.

John Kemmer Young, 79, of East Ridge, TN, passed away Tuesday, Nov. 24, 2020, at Standifer Place in Chattanooga, TN. He was born April 8, 1941, in Crossville, son of the late George Dean Young and Lena Jane (Kemmer) Young John worked for Dupont as a control operator. In addition, he was a me…

Joseph Logue McNutt, 95, of Crossville, passed away at home on Nov. 23, 2020. He was born on March 11, 1925, in Uniontown, PA, son of the late Joseph Russell McNutt and Kathleen (Logue) McNutt. After serving his country in the Army during World War II and being awarded a Bronze Star, Joe wor…