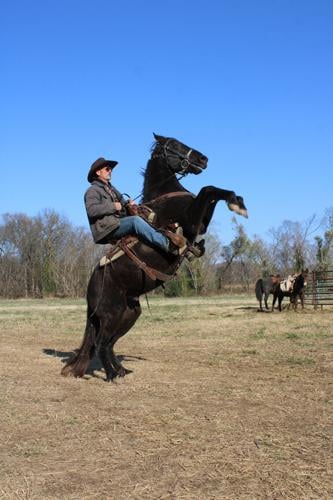 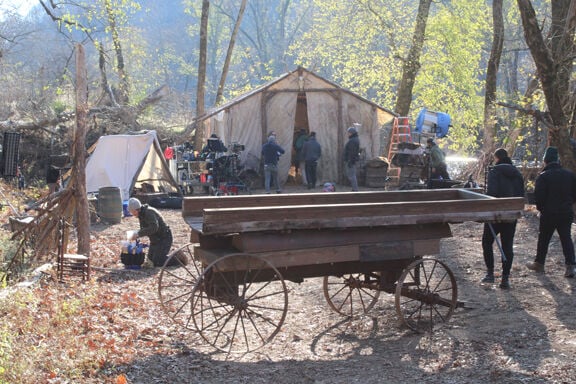 Savage Lands is produced and filmed at a farmstead along the Harpeth River in Kingston Springs, TN. 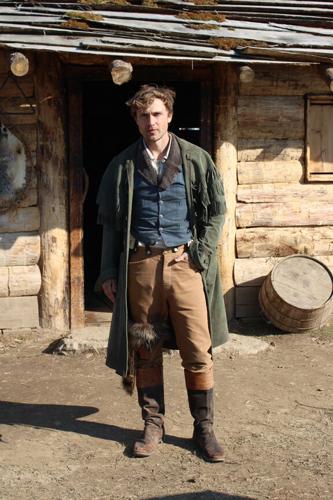 Savage Lands is produced and filmed at a farmstead along the Harpeth River in Kingston Springs, TN.

Tennessee is known for a few things: volunteerism, agriculture, moonshine and the subsequent birth of NASCAR, a unique Southern accent with hard Appalachian Rs, the common and championed use of the colloquial contraction "y'all," the Great Smokey Mountains and country music.

However, Tennessee is not the first thing that comes to mind when it comes to filmmaking.

That may be all about to change.

"Savage Lands," an independent film written and directed by Derek Purvis about Davy Crockett, one of Tennessee's most notable historical figures, is being produced and filmed at a farmstead along the Harpeth River in Kingston Springs, TN.

Choosing Tennessee for the location and production of the film, "Savage Lands" has garnered a following and much of the community's support simply because members felt close to the project.

"The community's been wonderful, and everybody's been great to work with," Marko said. "It's been a pleasure."

The film about the Tennessee pioneer hero is long overdue. The last movie about the "King of the Wild Frontier" was produced 68 years ago by Walt Disney in 1955 and filmed in Tennessee.

Not only is "Savage Lands" a Tennessee-made film, but it also has Cumberland County ties.

Crossville native and bonafide cowboy Ron Neal has paired his love of horse wrangling with filmmaking.

Neal, who said he's been riding horses his whole life, started Reel Show Animals, LLC, raising and training horses for the production of commercials and films.

"I remember my grandpa used to put me on his old horse, Abner, when I was a kid," Neal said. "Everybody has a story where the horse ran away with them, but I didn't fall off."

For "Savage Lands," Neal employed his horses and mules and sourced additional horses from area stables. While filming, he and his hands set up a cowboy camp onsite to live during the week near the fields and horse rings.

Marko said Neal was a multi-faceted asset to the film. Neal's responsibilities included horse transportation and acquisition, daily equine maintenance and care, stunt training for the horses, as well as rider training for the actors.

"Training the horses – they're already trained when they get here. We just keep them fresh," Neal said. "It's training the actors, really. It's one thing to teach somebody to ride a horse; you can teach somebody pretty quick. You can spend a couple of hours teaching somebody who really wants to learn, but imagine teaching that person to where they look like they've been riding their whole life. It's a whole different ballgame."

Neal said Moseley had learned to ride while filming "Narnia" but rode English style and hadn't ridden in a few years. However, he added that Moseley's willingness to learn and discipline to practice made him easy to teach.

"William has been the best," Neal said. "Every day that we're not working, he's here riding with us. He just works so hard."

Neal said each horse is different and because each responds in its own way, one of the most important things he must do is acquaint the actors with the horses.

"There's a lot to it," Neal continued, "but, really, that's my favorite part about this is working with the guys and teaching them how to ride. It's fun. I have the best job in the world."

But, often as the most experienced rider, Neal becomes the stunt double on horseback, is cast as an extra when the scene requires horses and people in the background, and even takes on minor speaking roles when needed.

Cast as the lead in "Savage Lands," Moseley portrays Davy Crockett. The English-born actor said he learned the basic history of Davy Crockett from his parents, that Crockett was a frontiersman and died at the Alamo.

"I didn't know the depths of his life," Moseley said. "Everything in-between was just something I had to learn about. I was honored to learn and to play him and to know that he stood for Native American rights; he was a man of principle, he was a frontiersman, he was a survivor, he was a hunter – he was a did-it-all guy. It's just really an honor to play him."

The film's plotline follows Davy Crockett on his arduous and adventurous journey across the untamed frontier lands of the early 1800s as he returns to his ailing wife, Polly (Valerie Jane Parker), and their sons, who are left to fend for themselves. Other historical Tennessee figures in "Savage Lands" are Daniel Boone, Andrew Jackson, Martin Van Buren and James K. Polk.

Country music fans will also be happy to see Craig Morgan, who was born in Kingston Springs, getting some screen time.

Moseley said director Derek Purvis approached him after seeing an interview and thought he'd be an excellent fit for the role of Davy.

"Funnily enough, and he thought I had Davy Crockett spirit, which was very nice of him," Moseley laughed. "I'm a very positive person. I'm grateful I've never had any depression or anything like that. I have only ever had a very happy, positive outlook on life. I'm quite a strong person in that way. I think Davy Crockett had a lot of those qualities as well."

When "Savage Lands" came to fruition, he loved the idea of being immersed in Davy Crockett's birth state and the connection he could have with the story, the land and the hero.

His favorite part about portraying Davy Crockett is the action.

"It's riding the horse, shooting the musket, doing all the stunts, throwing the ax; I just love anything physical. I love doing my own stunts," Moseley said. "I get a kick out of it. It's fun. It's a bit like being a 12-year-old boy, but they film you and make you look cool. So, I'm all about that."

"I'm loving the Tennessee accent, to me it's like poetry," he said. "I love the voice. I love the sound of the way it moves. It reminds me of Mark Twain's writing. You know, I love his writing. I love Huckleberry Finn. I'm reading it right now, actually. And it's very beautiful; a very lovely, lovely sound. It's resonant. It's a strong voice. I love it."

Then, in his confident and charming newfound Southern accent, he said, "I found my hard Rs."

Not only is "Savage Lands" about a Tennessee pioneer, but it is pioneering the way for more filmmaking in Tennessee.

"I'm surprised; people have been telling me that there aren't enough films being made here," Moseley said, "that there isn't a big incentive, tax incentive. So, I really want to personally reach out to the governor and tell him how great the crews are and how he's got to get more movies in this state because it's a stunning, beautiful place with a rich, wonderful history."

Aside from the more recent filming of "Nashville," Country Music Television's six-season series, it's been decades since the film industry sought out Tennessee with its unique vistas, historical landmarks, features and landscapes. But, Tennesseeans still feel a sense of state pride when they watch such films as: "The Fugitive (1993)" filmed in the Great Smokey Mountains, and Deals Gap; "The Jungle Book (1994)," featuring waterfall scenes filmed at Fall Creek Falls State Park and Ozone Falls State Natural Area; several movies based on John Grisham novels, such as "The Client (1994)" and "The Firm (1993)," both filmed in Memphis, TN; "The Green Mile," based on Steven King's novel, was shot on location at Shelbyville, TN, and the old Tennessee State Prison; "Country Strong" was filmed in and around the greater Nashville area, from the downtown honky tonks to Belle Meade; and, basically, every Jim Varney aka Ernest P. Worrell film ever made.

"I love Nashville," Moseley continued, "I could only see more and more actors wanting to be in Nashville. So, let's make it happen."

In April 2022, the Tennessee Entertainment Commission, in partnership with the Tennessee Department of Revenue and Department of Economic and Community Development, announced the state-initiated tax credit program as an incentive to bolster the development of Tennessee's entertainment industry. The incentive offers up to a 25% grant on qualified Tennessee expenditures to production companies filming in Tennessee, a standard credit of up to 50% on resident and non-resident payroll expenses, a point of purchase sales and use tax exemption on qualified goods and services, as well as occupancy tax rebates.

"You've a very experience film group here," Moseley continued, "but there needs to be more. Georgia is doing really well with their tax incentive. They have the Marvel movies there. There's no reason why Tennessee shouldn't have that level of filmmaking as well."