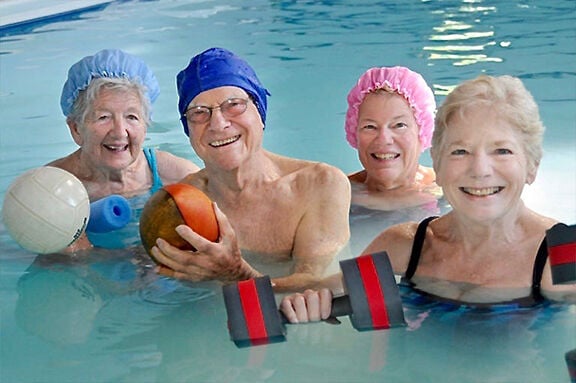 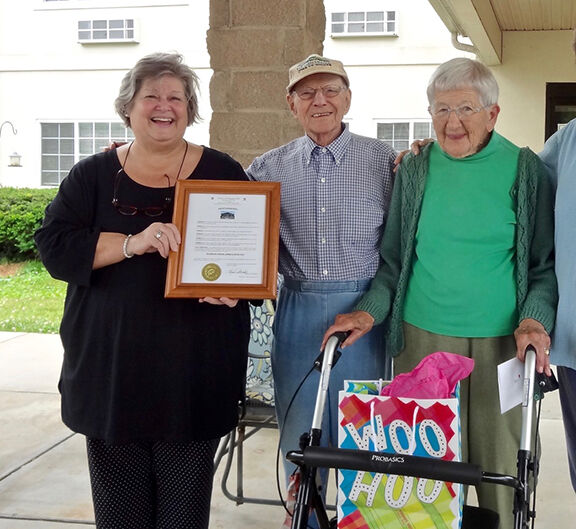 Last week Franklin and Betty Parker of Pleasant Hill were greeted by residents in Uplands Village’s eight neighborhoods as they were driven around by friend Peggy Happy.

Everyone wished them “Happy Birthday,” and soon, a “Happy Anniversary.”

Betty and Franklin were born with the same last name – Parker. They met as entering students at Berea College, near Lexington, KY. Because they had the same last name, they were seated next to each other in several classes and had adjacent mailboxes.

This proximity fostered their romance, which grew and led to their engagement, marriage and a lifetime of teaching and writing careers.

Betty says, “Frank was 29 when we married. As a WWII Army Airways Communication System draftee he mastered the art of bed making. Thus, one reason for our happy 71-year marriage is that he makes the bed, complete with square corners, every day.”

The Parkers have been extensive researchers and prolific writers. As teachers, librarians, researchers, professors, writers and editors, their combined careers led them to venues around the world and back again.

Musing on this journey, they state, “After almost 27 years here, we realize that settling in Pleasant Hill brought us back to the area where we met and received our higher education, a wonderful homecoming. We are four-driving hours from Berea College, Berea, KY, where we met in 1946 and a two-hour drive from Peabody College of Vanderbilt University, where we attended graduate school. Those colleges made possible all the opportunities we have enjoyed throughout our lives together.”

Franklin then earned a master’s degree in library science at the University of Illinois, Urbana. Betty earned her B.A. degree at Berea and a M.A. degree from George Peabody College for Teachers in 1956.

Frank wrote and Betty edited his doctoral dissertation on George Peabody in 1956, which was defended, accepted and later published by Vanderbilt University Press as “George Peabody, A Biography” in 1971. In 1995 on the 200th anniversary of George Peabody’s birth, Frank’s updated version was republished with 12 illustrations. Their fascination with the largely forgotten founder of modern educational philanthropy, George Peabody, took them to London, changed their lives, and led them to 27 trips abroad.

Franklin was active in major professional education organizations, was president of the History of Education Society, and was book review editor of Phi Delta Kappan, a leading education honor society journal.

A competitive Kappa Delta Pi Fellowship in International Education took them to Africa for eight months during 1957-’58. Frank’s small book about their experience, “African Development and Education in Southern Rhodesia,” Ohio State University Press, 1960, led to Frank’s being asked to contribute articles about Africa to encyclopedia yearbooks: Americana, World Book, Collier’s and others, for over a decade.

Frank emphasized more and more international education during his 40 years of teaching at the Universities of Texas, Oklahoma, West Virginia, Northern Arizona and Western Carolina. He felt that teachers with intercultural-international understanding could help new student generations build a more peaceful world.

During his last assignment, he was Claude W. Benedum Professor of Education at West Virginia University, Morgantown from 1968-’86 before retiring at age 65.

They moved to Uplands Village, Pleasant Hill, in 1994 where they have lived for the past 27 years.

Franklin and Betty are daily swimmers and walkers. They participate regularly in Flex and Stretch exercise classes.

A major activity at Uplands has been in the Uplands Book Review group, presenting annual dialogue lectures to large audiences, often about famous people, such as Albert Einstein, Franklin and Eleanor Roosevelt, as well as many other leading scientific and political figures. Contact them at bfparker9@gmail.com to access their many writings. Visit www.amazon.com/FranklinParker/e/B001KMQUD8 to access their many writings.

Frank takes only one prescribed drug. At his urging, his doctor eliminated all his other prescriptions. The doctor commented, “I’m not going to tell a hundred-year-old man what to take.”

Frank’s standard menu for all meals at the Fletcher House for Assisted Living at Uplands is a fruit plate with cottage cheese. Betty gets extra fish or chicken which she encourages Frank to share.

Instead of a birthday cake, the Fletcher chef prepared a platter of Franklin’s favorite fruits.

So that’s his secret to a long life – “make a bed with square corners and eat light meals.”

Mary Spangenberger, 99, of Crossville, passed away on June 15, 2021, at Standing Stone Care & Rehab Center in Monterey. She was born on April 25, 1922, in Erie, PA, daughter of Fredrick Zwack and Helen Whalen. She was of the Catholic faith. Mary worked multiple jobs at Eastman Kodak in R…

Kenneth "Ken" R. Hayes, 87, of Crossville, passed away peacefully at home on June 14, 2021. He was born on Feb. 8, 1934, in Knoxville, son of the late Horace Hayes and Avis (Seiber) Hayes. Ken worked as a truck driver during his career. He attended the Brown's Chapel Church of God. He is sur…

Some people only walk this earth for a short time. Their departure reminds us that angels are watching over us. Last week, Aggie Reed rejoined her heavenly family and gained her wings. Agnes Lee "Aggie" Wilson-Reed passed away unexpectedly in Cookeville on June 11, 2021, at the age of 83. Ag…