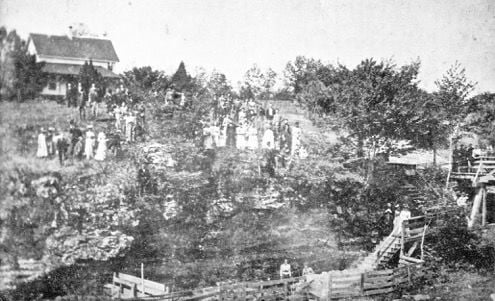 This photo (circa 1900) was taken of the Pleasant Hill Academy Principal’s House with several students standing on the bluff and stairs between the House and Academy campus. (Courtesy of Pioneer Hall Museum) 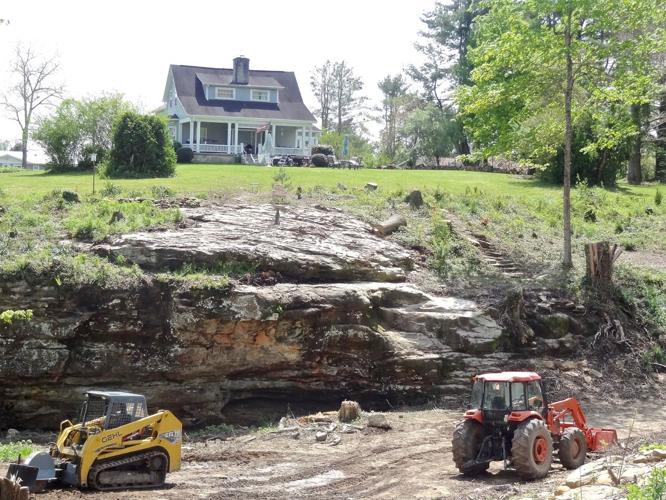 This photo (circa 1900) was taken of the Pleasant Hill Academy Principal’s House with several students standing on the bluff and stairs between the House and Academy campus. (Courtesy of Pioneer Hall Museum)

Long before Pleasant Hill became an incorporated town, Calvin Brown came from North Carolina in 1830 to settle on a large land grant he had received. He also bought or traded for additional land in what is now western Cumberland County and eastern White County. Here he raised 14 children and whatever crops necessary to sustain them. His land included a pleasant little spot with a spring of bubbling water, which was a great place to camp for travelers or visitors – a “pleasant hill.” After the Civil War, several people stopped and settled here purchasing their farms from Brown. The Hubbard family built a cabin around 1870 on land they bought above the bluff where the spring was located. Hubbard and Abbott planted an orchard and established a plant nursery there.

When the Benjamin Dodge family arrived in 1884 to establish the Pleasant Hill Academy they rented that cabin, but soon arranged to buy it and the surrounding acreage for a farm. The daughter, Emma deeded it to the American Missionary Association (AMA), owner of the Academy, in 1929. The house was expanded and used as home for the principals of the Academy until it closed in 1947. Thereafter, it was used as a guesthouse or for various activities of the Pleasant Hill Community Church until the AMA sold it in 1962. Since then it has been owned privately. The present owner, Norman Hall, intrigued by the Principal’s House history has been working with Jim Blalock, president of the Pleasant Hill Historical Society of the Cumberlands. They have been clearing the trees and brush from the area of the Academy where Dodge Hall stood (burned to the ground in 1921), the bluff and the spring.

The annual meeting of the Pleasant Hill Historical Society of the Cumberlands will be on Sunday, May 20, at 2:30 p.m. in the Pleasant Hill Community House on Main Street across from the Post Office. There will be a short business meeting, election and installation of new officers and Board members. The guest speaker will be Chuck Sutherland, PSM – a caver, photographer, geologist and environmentalist. Rocks tell stories. His background in geography, geology and caving primed him well to learn the stories of the Cumberland Plateau as he hiked its forests and hills. He will be talking about the origins of the Cumberland Plateau and providing context to its existence using adjacent physiographic regions like the Blue Ridge, Valley and Ridge, and Eastern Highland Rim. He'll talk about the geology and structures of the features and landforms like coal, fossils, natural arches, waterfalls and rock shelters. The presentation will be highly visual, with many examples of what he considers to be the finest outcrops and landforms presented to support the larger story of Tennessee's Cumberland Plateau.

Pioneer Hall will be open for visitors before and after the meeting and be a great opportunity to view the extensive work that has been done by Norman Hall and Jim Blalock to open up the view of the bluff with the Principal’s House on top behind the museum. Two new exhibits in the museum enhance the ongoing displays. One case shows programs from musicals and plays presented by the Academy. The other is a collection of photographs depicting the bluff, the spring, Dodge Hall, the park behind Dodge Hall and the Principal’s House. Comparing those photos with the present restoration, it is easy to visualize what it must have looked like in Academy days.

This week in Pleasant Hill:

Friday, May 18 — Cummins Falls waterfall overlook and John Cummins trails one-mile hike. Meet at 9:45 a.m. in the Aquatic Center parking lot on West Lake Rd. to carpool to the trailhead.