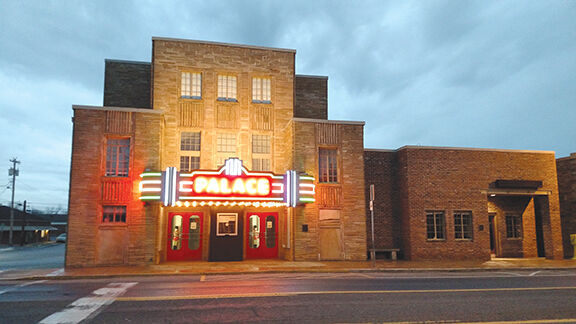 The neon sign from the Palace Theatre continues to welcome guests to the historic theatre on Main St. In a typical year, nearly 30,000 people visit the Palace for live music, community meetings and even weddings. 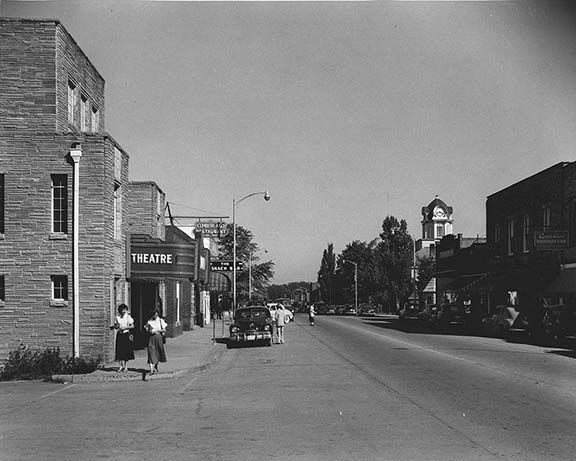 From the time it opened in 1938 to its closing in the 1970s, the Palace Theatre was a signature part of downtown Crossville. The theater is pictured above in 1952, when it was a first-run theater offering the latest movies on the big screen. 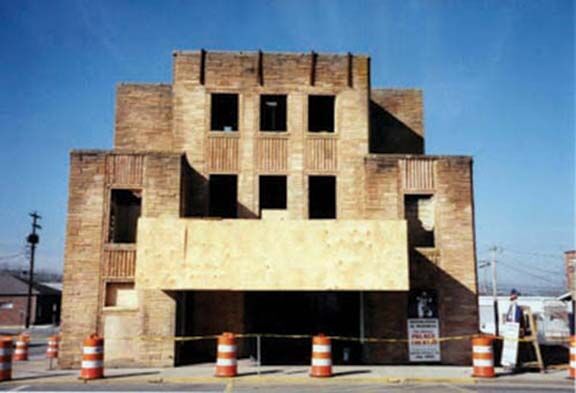 By 1990, the building had fallen into disrepair, with missing windows a collapsed roof and crumbling façade.

The neon sign from the Palace Theatre continues to welcome guests to the historic theatre on Main St. In a typical year, nearly 30,000 people visit the Palace for live music, community meetings and even weddings.

From the time it opened in 1938 to its closing in the 1970s, the Palace Theatre was a signature part of downtown Crossville. The theater is pictured above in 1952, when it was a first-run theater offering the latest movies on the big screen.

By 1990, the building had fallen into disrepair, with missing windows a collapsed roof and crumbling façade.

By 1990 The Palace Theatre was crumbling; it had no roof, no seats, and had become quite an eyesore in Crossville’s downtown. Hardly the “Jewel of Main Street,” as was its nickname, and 58 years removed from the glittering 1938 world-premiere when Crossvillians screened “If I Were King” starring Ronald Colman and Basil Rathbone.

Since that glamorous opening, the three-story movie palace, featuring its Art Deco style and local Crab Orchard Stone, operated as a first-run theater until the 1970s. It is still a regular occurrence to have Crossvillians come by The Palace and reflect on the movies they saw there as children, paying a nickel or dime for admission.

Just as The Palace put its predecessor The Mecca Theatre out of business in 1939 (though the shape of it can still be seen if one looks at Andrew Ingram’s bike shop on Main St.) the Capri Twin opened in the late ’70s with a new two-screen theatre, and that sounded the death knell for The Palace. It closed in 1978 and remained vacant for a generation. Even as the natural depreciation of buildings ran its course, The Palace was featured in the 1987 book “Great American Movie Theaters” by architectural historian David Naylor.

There were signs of hope, however. In an attempt to staunch the disrepair, the city of Crossville bought the building in 1992 for $50,000, and two years later it was recognized by a listing on the National Register of Historic Places. But by the mid-1990’s the deterioration was near complete, and more action had to be taken. A group of interested citizens banded together under the name Downtown Crossville, Inc. to advocate for just such a functional community auditorium.

Their pressure worked. On Nov. 5, 1996, the Council voted to hold a bond referendum for $550,000 to pay for the restoration. There was a feeling by some that this was the one chance to save the structure else it might be torn down. The posters around town read, “VOTE YES to SAVE THE PALACE.” It worked. The referendum passed by a three to one margin. The Palace was on its way back from quite literally the brink of destruction. Then the work really began.

But what they discovered next was that building codes had changed since 1938, so Sparkman & Associates Architects were enlisted to lead in a proper restoration. It was further determined that the adjoining Mitchell Building would also have to be purchased to eventually serve as Palace administrative offices and patron concessions, restrooms, and lobby areas. The price tag for this restoration was growing.

DCI spearheaded all fundraising efforts, securing a $264,000 grant from the Tennessee Department of Transportation in 1999. Further campaigns included a sale of sidewalk stones, lobby tiles, and a “Pennies for The Palace,” which saw about $3,000 raised by local school children.

Though code compliance and audience comfort increased, so did the overall cost of the now larger project, and few on the council were in the mood to go back to the taxpayers to ask for more money.

Despite the forward motion to address rising costs, on Jan. 21, 2000, the council approved a vote to tear the building down over objections of DCI and other downtown businesses. When word got out, undeterred supporters got on the phone…and at a meeting two weeks later the council reversed their previous vote — with one council member changing their vote.

Ultimately the interior reflected an Art Deco design style. Side walls are recessed panels with inset bullseye wall sconces. The walls were painted turquoise and salmon; the carpet was of a paisley design. Cumberland County Playhouse staff provided technical support in developing the stage lighting. To complete the project, Regal Cinema donated used theater seats and a late model projector. The grand re-opening was Feb. 15, 2001.

A generation of Tennesseans all across the Cumberland Plateau have enjoyed the building as a multi-use community auditorium and visitors’ center, complete with memories of live music, including jazz, blues, country, bluegrass, and rock – playing to, typically, about 15,000-30,000 patrons every year. Even more than a home for the arts, The Palace has hosted 180-330 rental events every year, making it a frequent home for everyone from corporate trainers to wedding receptions to church services.

Unfortunately, on Saturday, March 14 of last year, came an ominous sign. “It was kind of surreal. COVID had not reached our county yet,” recounts Angela Robbins, teacher at Cumberland County High School and director of Jet Theatrix, CCHS’s theatre club. “We were all nervous that we would be shut down at any minute.”

Robbins laments, “We got the notice around 8 p.m. on Sunday night, March 15, that schools would close.” That Saturday performance of “I Never Saw Another Butterfly,” a story about the liberations of the Terezin and Auschwitz concentration camps, would be the last public performance on The Palace stage for seven months.

So The Palace’s 20th anniversary lands at an auspicious moment in time — while it should be a winter showcase for unforgettable live music, it lands instead in a winter of discontent, with cautious patrons staying close to home, praying for relief from an unrelenting virus. Since current COVID restrictions limit capacity to 50 patrons, this community auditorium serves Crossville, for the time being, by carefully presenting smaller events – films, wedding receptions, open mic nights, and intimate live music events. The Historic Palace Theatre has seen a lot in the last 83 years, and as it slowly turns the page on this challenging chapter, rest assured it will again see an active schedule and sold-out houses, serving tens of thousands of arts lovers from Nashville to Knoxville, and everywhere in between.

Todd Olson is the supervisor of the Palace Theatre for the city of Crossville.

Lana Ruth Hensley, 85, of Lebanon, TN, formerly of Crossville, passed away Feb. 15, 2021. She was born Aug. 2, 1935, in Detroit, MI, the daughter of Edward A. and Gladys M. Poole Laffrey. She was a kind and loving Christian lady who loved her family deeply. She enjoyed gardening and growing …