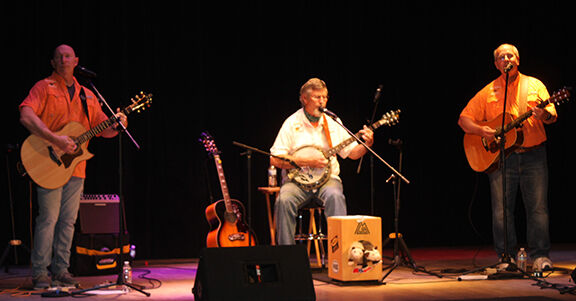 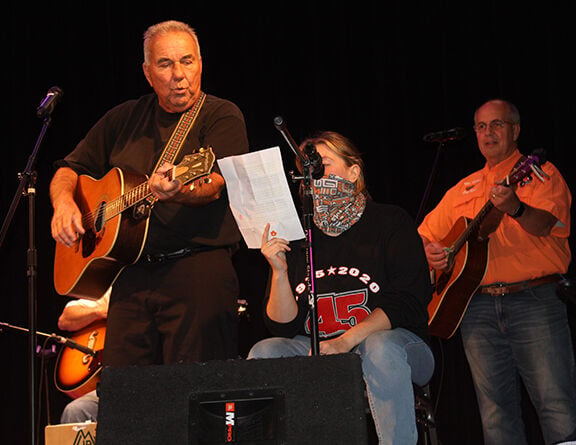 The Mt. LeConte Jug Band, from Spring City, performed at the Palace Theatre Nov. 5 as part of a Knights of Columbus benefit concert for Hilltoppers, Inc.

Due to COVID, and in the interest of safety for all patrons, the virtual concert was filmed live without the benefit of an audience.  It will be available on DVD for a donation.

The jug band, noted for its grassroots Americana genre, did not disappoint. Darrell Wallace on lead guitar, Jim Radle on rhythm guitar, and Chris Hill on banjo, guitar and harmonica, performed in a hometown fashion playing lovely renditions of folk, country, rock and pop music. They covered a wide range of Americana music including the “Tom Dooley” (Kingston Trio); “Country Roads” (John Denver); “Tennessee Waltz” (Patti Page); “King of the Road” (Roger Miller). They finished the show with a special rendition of Jimmy Buffet’s “A Pirate Looks at 40” replacing the “40” with “60” because, as band leader Chris Hill jokingly explained, “We’re all getting up there.”

The concert also featured the Hilltopper Cluckers, a group of high-spirited singers served by Hilltoppers, Inc. Accompanied by guitarist Larry Opatik, they sang spirited patriotic songs and gospel oldies, and highlighted their performance with a rendition of “The Chicken Song” from which they garnished their group name “The Cluckers.”

Mt. LeConte Jug Band is a regular in the Crossville area, playing at festivals in Lake Tansi and Fairfield Glade. They have also played such venues as the Tennessee Valley Theatre, Museum of Appalachia Fall Homecoming, and UTC Alumni Events.

Band members, who describe themselves as a bunch of friends “living the dream” playing their music, have a very philanthropic soul. They perform at no charge at numerous charity events. This was the case the Palace Theatre. The theatre also donated its time and facility for the evening.

Proceeds from this event will go to the Knights of Columbus Council 16088 MR Drive campaign, often referred to as the “Tootsie Roll Drive.” The St. Francis of Assisi Knights of Columbus Council 16088, located in Fairfield Glade, is a Catholic men’s fraternal organization based on the principles of charity, unity, fraternity and patriotism. Each year the Knights collect funds to assist individuals with intellectual and developmental disabilities through their MR Drives. The sale of DVDs of Thursday’s concert will benefit Hilltoppers, Inc., a non-profit organization devoted to improving the lives of intellectually and developmentally disabled adults in Cumberland County.