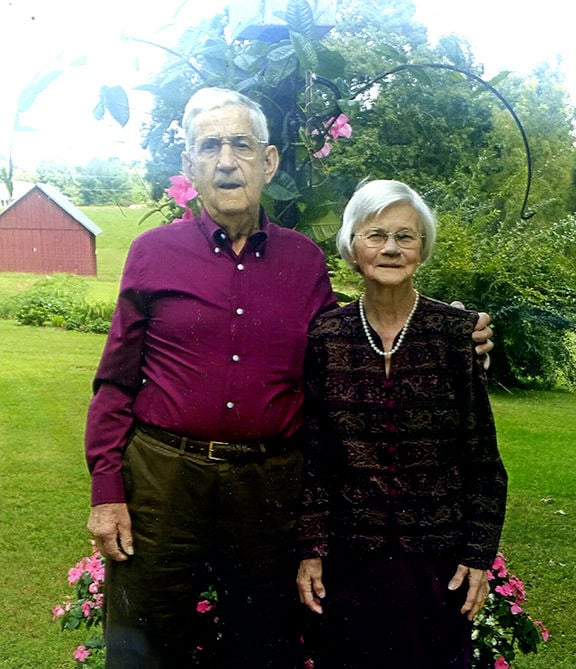 Roy and Wilma Brown were married March 14, 1942. The secret to a long and happy marriage, Wilma says, is patience. 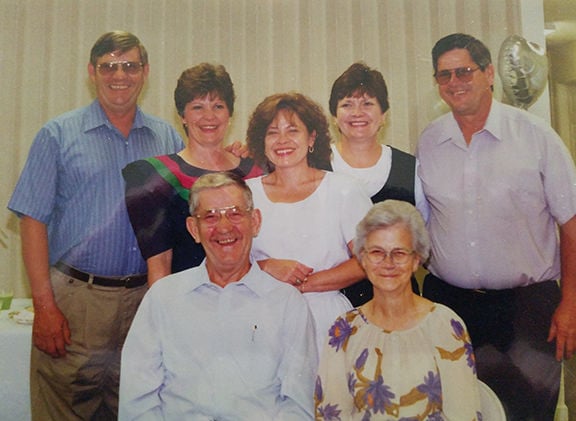 The Brown family loves to gather to celebrate special events. Here, Roy and Wilma get a picture with their adult children, from left, Boyd, Linda, Judy, Charlotte and Jerry. 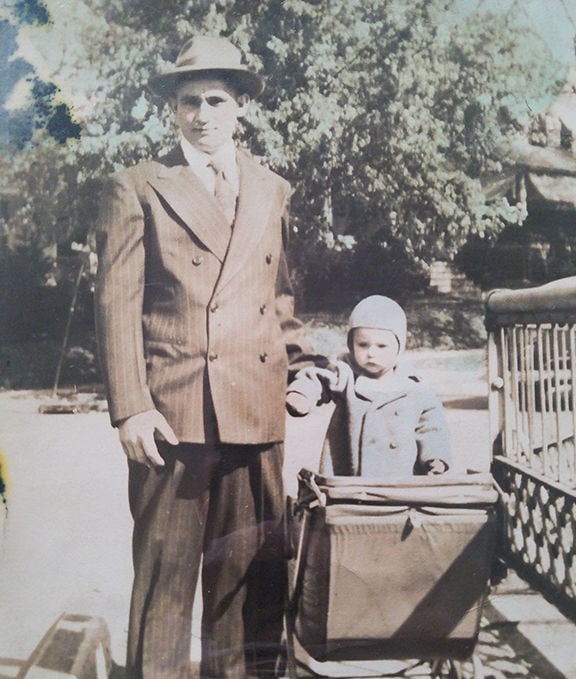 Roy Brown poses with eldest child, Boyd, during the family’s stay in Ohio.

Roy and Wilma Brown were married March 14, 1942. The secret to a long and happy marriage, Wilma says, is patience.

The Brown family loves to gather to celebrate special events. Here, Roy and Wilma get a picture with their adult children, from left, Boyd, Linda, Judy, Charlotte and Jerry.

Roy Brown poses with eldest child, Boyd, during the family’s stay in Ohio.

For Roy and Wilma Brown, it all started with a pie supper.

“I bought her pie,” Roy said. “When the pies were all sold, I put her up for the prettiest girl.”

That involved an auction of sorts, with each person bidding an amount to name their nominee “The Prettiest Girl.”

Roy said an old boyfriend of Wilma’s had put in with another boy to bid on another girl.

“They run me out of what money I had, so I had to just quit,” he said.

But he still won the night, with the pleasure of walking Wilma home that night.

In talking, Roy and Wilma share they’d actually met before the pie supper.

He and a friend had taken Wilma and another girl on a double-date.

“He bought us all a bar of candy, and she wouldn’t eat hers,” Roy said. “I was sitting right by her. She punched me in the ribs and put that candy bar in my pocket because she didn’t like him much.”

Wilma said, “I thought he was a nice person. And he didn’t look bad, either.”

Roy said he knew the first time he saw Wilma he wanted to get to know her better.

They dated for more than a year before Roy proposed.

Wilma’s dad wasn’t too keen on the idea, but her mother was.

“Momma thought more of him than she did me,” Wilma laughed.

There were married at the Cumberland County Courthouse by Judge Powell with her mom and his dad standing as witnesses.

“It was a beautiful day,” Wilma said. “The sun was shining.”

They moved to Ohio around 1943 and Roy found work in the northern factories. Over the next two years, they saved up enough to return to Cumberland County and buy their home in Linary where they live today.

They attended nearby Linary School until it closed, then the kids went to Homestead. Oldest Boyd graduated from Homestead High School before Cumberland County High School opened and the county consolidated.

“The neighbors would all gather up here to play when the kids were little,” Roy said. “Sometimes it would look like school had turned out in the yard.”

Son Jerry once invited the entire school to his birthday party, Wilma said.

“And he was just a little fella,” she said.

She stayed home with the children. Roy worked at various occupations over the years: coal mining, sawmills and factories.

“We both worked hard,” Wilma said.

Today, Roy and Wilma still live in the home they raised their children in. Over the years, they've shared a multitude of memories, and they have kids, grandkids and great-grandkids nearby.

They remain active in their church, Main St. Church of Christ, and Sunday supper is still a special family event.

Wilma has organized a lifetime of photos into albums — one for each child and their families. There, birthdays, Christmas and the days gone by jump from the photos, bringing a smile to her face.

The secret to a long and happy marriage, Wilma says, is patience.

Roy says it requires learning “how to say yes.”

Wilma said their faith has been a big part of their life. They start their days with prayer and reading the Bible together.

“It’s just wonderful to be able to go to church and live like you’re supposed to,” Wilma said. “That’s one thing that’s helped us in our marriage. It’s a wonderful life.”

Asked about advice to couples starting out today, the Browns said couples needed to be dedicated to one another and love one another.

“If they love each other, they can make things work,” Roy said.