Canceled checks Martin Luther King Jr. wrote out to Rosa Parks (pictured), Jackie Robinson and Montgomery Improvement Association from the Southern Christian Leadership Conference bear the signatures of prominent figures of the Civil Rights Movement, giving even more insight to the movement itself and the legacy. 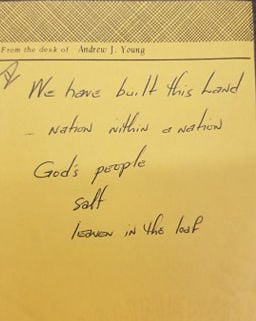 Canceled checks Martin Luther King Jr. wrote out to Rosa Parks (pictured), Jackie Robinson and Montgomery Improvement Association from the Southern Christian Leadership Conference bear the signatures of prominent figures of the Civil Rights Movement, giving even more insight to the movement itself and the legacy.

Tricia Harris of Lafayette, GA, is the former chief operations officer of the Legacy of Martin Luther King Jr. and now works as executive aide to Ambassador Andrew Young, who is the last living member of the Civil Rights Movement inner circle.

“I’ve basically been tied to [Young’s] and Brother Martin’s legacy for the past 25 years or so,” Harris said.

Harris assists in managing Young’s legacy affairs, charitable fundraising, and working on special projects, including research projects. Recently, while Harris conducted some research for a project on Young’s behalf, she was sifting through the comprehensive SCLC archives collection at Emory University in Atlanta. Young was the executive director of SCLC who ran the organization when King was president/CEO. Harris said Young went on to be the first African-American Congressman out of the South since Reconstruction. He became mayor of Atlanta and U.S. Ambassador to the United Nations under President Jimmy Carter.

The research she was conducting was for a special project as Young will be celebrating his 88th birthday on March 12.

“I was in SCLC’s archives, and they’re so exhaustive. These archives– they’re everything from speeches, like “I have a dream…” and Young’s speeches, through actual work products from during the movement– planning documents, budgets and literally receipts– they had a sense of history so they pretty much kept; it’s shocking how much survived all these decades later.”

She came across canceled checks written out by King and co-signed by Ralph David Abernathy from SCLC to such movement icons as Rosa Parks and Jackie Robinson, as well as the Montgomery Improvement Association.

“There were even checks to MIA all from SCLC in the early days of the movement,” Harris said. “Very cool.”

Abernathy is credited with writing the business plan for the bus boycott. Parks’ arrest for refusing to give up her seat on the bus gave the movement a pulse. MIA was the predecessor to SCLC, established as the initial organizing entity of the movement. SCLC was formed after the Montgomery Bus Boycott of 1955.

“These were actual canceled checks, so they signed them on the back. They’re just a part of general administration files in an archive in Atlanta,” Harris said, half shocked and half with the realization that they had been there in a box the whole time. “I thought, ‘How cool is that?’ Since Rosa Parks kind of marks the beginning, how we understand it, of the Civil Rights Movement. It’s cool because they’re actual checks. I’m like, ‘I’m holding a Rosa Parks check from SCLC.’”

Regarding the MIA check, Harris said, “The significance of that is that MIA is the organization that the Montgomery Bus Boycott with Rosa Parks took place. Those happened in the 1950s.”

Although they do not know the nature of the checks other than to reimburse or pay for the expenses of the movement, Harris added that Young said Parks was “dirt poor.” At a time when a hamburger and milkshake meal at the local burger joint would have cost a nickel, $200 would have been a significant amount and certainly made a difference for her. Harris said there were several checks written to Parks in the archives. Knowing the bus boycott occurred in 1955, and at least one of the Parks checks was written out to her in 1962, Harris noted, “That would have been several years after the start of the movement, so what that says is that she had an ongoing, continuous relationship with SCLC, because SCLC was the coordinating entity principally across the Southern states, until they moved north into Chicago.”

Harris said, “We may be able to ask a couple of historians why they were receiving those statements, but right now we don’t really know.”

“I bet you, outside of the processing the archives, nobody has ever really focused on them,” Harris said. “Unless you’re very specifically looking at the finances of SCLC, you wouldn’t even think to go to financial records. You go to speeches, you go to program booklets, you go to photographs, video, but not to financial records. It’s fascinating.”

After King was assassinated, The King Center in Atlanta was founded by Coretta Scott King in 1968, to institutionalize her husband’s living legacy and act as his final resting place. The center also houses the largest human civil rights archives in the country. Currently, SCLC archives are housed at The King Center, Auburn Avenue Research Library on African-American Culture and History and Emory University. However, Harris said organizers are working on inter-archival consolidation to bring the entire SCLC collection together under one roof. The archives are on public record and are available for viewing and research. Appointments can be made at these locations to view the archival collections.

Harris said it gave history a different meaning when you can live with history.

“It’s a true walk through history,” she said of being able to talk personally about the Civil Rights movement with Young. “History means a very different thing when you get to live alongside people who, when you find something, [you can ask], ‘What are these checks for?’ You get to ask the questions. It makes history living and real and much more attainable. It has a humanizing affect that you don’t see these global icons, these global humanitarians. What you see are these people who were called to do these tremendous things…and they rose to the occasion.”

Harris said Young would be the first to say they had no idea was they were doing and improvised the entire time because they had no blueprint for what they were trying to accomplish. They found that nonviolence was a science, a philosophy and ideology and practiced it. They found they could use it as a practical and tactical to bring about social change and they broke the mold.

They practiced creating win/win scenarios, divorced themselves from their person, looked to the bigger social issue and always sought reconciliation to live together. They found a method to accomplish that and find that ground. Harris said SCLC operated on a shoestring budget and all the demonstrations started without money. The demonstrations would give way to campaigns, and there was always a race against time to make sure the campaigns were funded, from Montgomery, Birmingham, Atlanta, all the way to Chicago. The campaigns were all pulled together in movement and didn’t begin with funding.

“Freedom is not free. Looking at these checks, it’s really telling; invoices and late-payment notices. It is so incredible. Money always tells a story, doesn’t it? It tells a story that’s not readily apparent in history books… You still have to live, but you can still live and be and make a career out of humanity,” Harris said. “It’s just amazing history, something as benign as checks end up being this major thing that tells a story. That was my Black History Month contribution for 2020.”