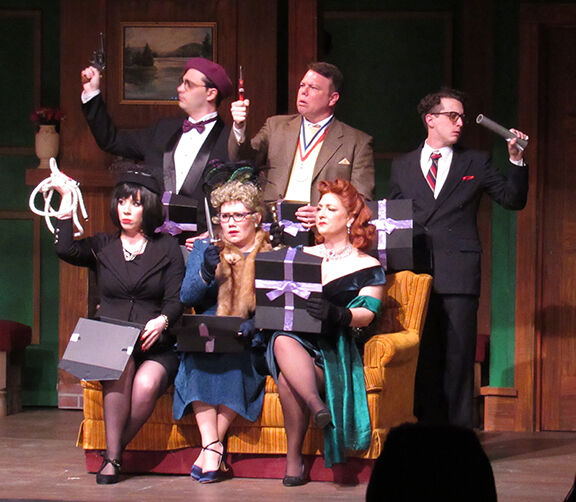 Was it Col. Mustard in the library with the screwdriver? Or maybe Mrs. Peacock in the ballroom with the knife? Find out ‘whodunnit’ at the Cumberland County Playhouse’s performace of “Clue,” now showing through April 29. 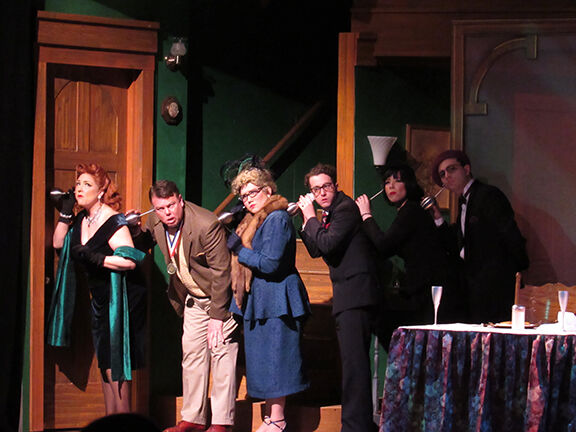 You can’t keep a secret from the characters in CCP’s production of “Clue,” now showing through April 29. 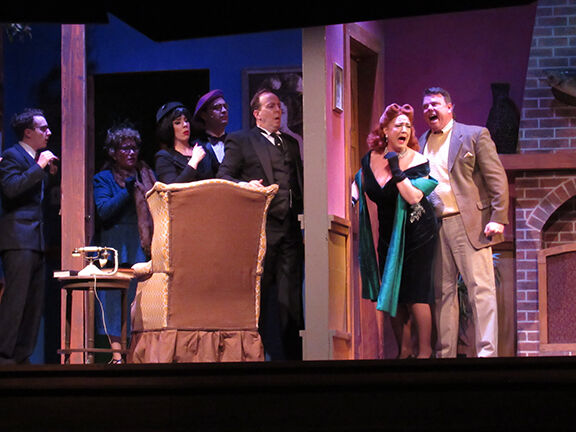 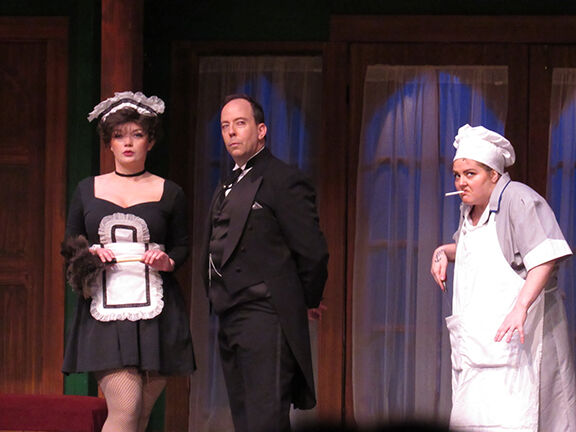 You can’t even trust the help. From left, DeAnna Helgeson, Jason Ross and Jensen Crain-Foster bring the characters of Yvette, Wadsworth and the Cook to life in CCP’s production of “Clue.”

Was it Col. Mustard in the library with the screwdriver? Or maybe Mrs. Peacock in the ballroom with the knife? Find out ‘whodunnit’ at the Cumberland County Playhouse’s performace of “Clue,” now showing through April 29.

You can’t keep a secret from the characters in CCP’s production of “Clue,” now showing through April 29.

You can’t even trust the help. From left, DeAnna Helgeson, Jason Ross and Jensen Crain-Foster bring the characters of Yvette, Wadsworth and the Cook to life in CCP’s production of “Clue.”

There was a buzz about the theater as members of the energetic audience eagerly awaited the curtain call for the opening of the Cumberland County Playhouse’s production of “Clue” on Friday, April 2. With the COVID-19 shutdowns and an abbreviated 2020 season, the long wait for the regional theater to reopen had finally come to an end with the beginning of the 2021 season.

Directed by Bryce McDonald, the fast-paced murder mystery based on the board game doesn’t disappoint. It resonates, bursting from CCP’s Mainstage. The storyline follows six blackmailed strangers under the guise of pseudonyms — Mr. Green, Professor Plum, Col. Mustard, Mrs. White, Mrs. Peacock and Mrs. Scarlett — who are invited to Boddy Manor for dinner where, as bodies begin to drop, Wadsworth the butler engages with them in the case which begs the question, “Whodunit?”

The synchronicity of the all-star cast of Playhouse players, however not unusual, was meticulously orchestrated and choreographed. Without missing a beat, they took to the stage together as though there had been no shutdown and hadn’t spent any time apart.

To see the show is to see the ease with which the cast pulls off their roles. Their abilities to fill up all the space between them and the audience with their big personalities never ceases to amaze. CCP’s own Jason Ross was an ingenious shoo-in, nailing his role of Boddy Manor’s butler, Wadsworth. He more than rivaled the excellent performance of Tim Curry in the 1985 cult classic film. Then there was Lauren Marshall as Mrs. Peacock, the preacher’s wife who, at the pinnacle of her paranoid neuroses, wasn’t able to cover all her sins. While Mrs. Peacock isn’t usually a fan favorite of the film, Marshall managed to take Mrs. Peacock’s character and make her the sweetheart of the Playhouse production. Of course, the show is made all the more brilliant with Britt Hancock as the dimwitted and uncanny Col. Mustard, Weslie Webster as the brutally honest Jezebel madam Mrs. Scarlett, Hannah Hayes as the dark creature with more than one dead husband that is Mrs. White, Grayson Yockey as the slightly narcissistic smarty pants Professor Plum, and DeAnna Helgeson as the not so maiden French maid Yvette. Multi-talented players Jensen Crain-Foster and Daniel Black play multiple roles, creating a solid foundation for the entire performance.

And that leaves Mr. Green. It was more than refreshing to see Corey Clark in a spotlight role like that Mr. Green. To say he has the panache for taking even the smallest roles and making them memorable is an understatement. But, to get to see Clark featured and carry the limelight is something that Playhouse audience members have been craving and were more than satisfied.

All that paired with the incredibly designed set build, as well as the epically professional light, sound and music, “Clue” is a well-produced play lending itself to be well-attended.

“Clue,” sponsored by Beef and Barrel Restaurant, Family Ties Restaurant, Venture Real Estate and One Bank of Tennessee, is rated PG and runs through April 29. Tickets are available by calling the box office at 484-5000. CCP has also added a unique viewing option for those who are not yet comfortable joining the public in-house. Purchase tickets to view CCP’s “Clue” from the comfort of your own home throughout April at broadwayondemand.com.

Upcoming spring productions include “Savannah Sipping Society,” opening April 23, and “Duck Hunter Shoots Angel,” opening May 14. CCP will be announcing the rest of the 2021 season productions at the end of April.

Joseph Henry Gumbel, 93, of Fairfield Glade, was born on March 7, 1928, to Clarence and Nellie in Manito, IL, and passed away at his residence on May 4, 2021. A Navy veteran and college athlete, Joe was an avid golfer and outdoorsman, but he'll probably best be so remembered for his love of …

Connie Lynn Dyer, 74, was born on Dec. 19, 1946, to Mitchell Earl and Bertha Blevins Pennington in Lakewood, OH. She passed away on May 6, 2021. She is survived by her children, Michelle McKamey (Terry), Kim Dyer and Rob Dyer (Stephanie); grandchildren, Skyler Phillips, Summer Dyer, Bethany …