That distinctive block, Tennessee Quartzite, can be found around the world, though it's quarried in Cumberland County and the Upper Cumberland area. Above is the newest mausoleum at St. Michael�s Cemetery in Queens, NY. Tennessee Building Stone provided the stone for the project. 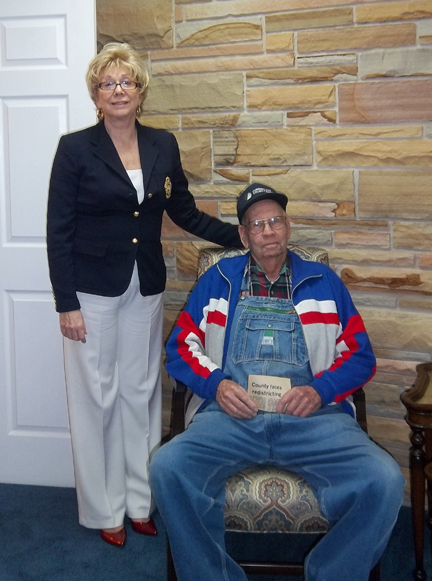 Beth Alexander, executive director of the Crossville-Cumberland County Chamber of Commerce, with R.L. Stone of Tennessee Building Stone. Stone was involved in the original construction of the Chamber building, which includes an exterior of native Tennessee Quartzite stone, and kept an eye on the stone provided for the recent expansion of the building to ensure it offered a cohesive exterior finish for the building. The original exterior of a wall was kept in the office. 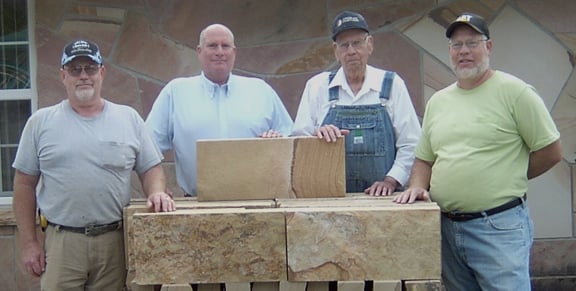 Chester Rose, Roy Rose, R.L. Rose Jr. and David Rose inspect stone from Tennessee Building Stone in Crossville bound for a building project at Cemetery of the Resurrection in Staten Island. R.L. Rose is soon to be 88 years old.

That distinctive block, Tennessee Quartzite, can be found around the world, though it's quarried in Cumberland County and the Upper Cumberland area. Above is the newest mausoleum at St. Michael�s Cemetery in Queens, NY. Tennessee Building Stone provided the stone for the project.

Beth Alexander, executive director of the Crossville-Cumberland County Chamber of Commerce, with R.L. Stone of Tennessee Building Stone. Stone was involved in the original construction of the Chamber building, which includes an exterior of native Tennessee Quartzite stone, and kept an eye on the stone provided for the recent expansion of the building to ensure it offered a cohesive exterior finish for the building. The original exterior of a wall was kept in the office.

Chester Rose, Roy Rose, R.L. Rose Jr. and David Rose inspect stone from Tennessee Building Stone in Crossville bound for a building project at Cemetery of the Resurrection in Staten Island. R.L. Rose is soon to be 88 years old.

Cumberland County is blessed with numerous natural resources. One that has captured acclaim world-wide is the native Tennessee Quartzite stone.

Commonly called Crab Orchard stone, the versatile building material put Crab Orchard on the map. Examples of its use can be found all around Cumberland County, most notably in the Cumberland Homesteads where the stone was used in homes for the 1930s homesteaders and in the construction of the Homesteads Tower and the bridge at Cumberland Mountain State Park.

Tennessee Building Stone was formed in 1979 by Charles Dunn. It was purchased by David Rose and other business partners in 1999. Tennessee Building Stone provided the stone veneer for the Crossville-Cumberland County Chamber of Commerce, and R.L. Rose recently visited the newly renovated Chamber of Commerce on Main Street and admired how the new addition kept with the original design and kept the Tennessee Quartzite stone throughout.

The family’s business roots are as strong as the stone, with father R.L. Rose raising his family in the industry. R.L. ran Ross Brown Stone Company and two of his sons, David and Chester, worked along side him. R.L. Rose returned to Cumberland County to work with Tennessee Building Stone when it was founded in 1979 and all three of his sons, Chester, David and Roy, followed within a few years.

“We followed in his footsteps,” Rose said.

The distinctive stone is quarried in Cumberland County and surrounding counties in the Upper Cumberland.

“They used to say it was found within a 50-mile radius of the little town of Crab Orchard, but it’s quarried in Bledsoe County, Morgan County and over in Livingston,” Rose said. “But the Crab Orchard name is what stuck.”

N.D. Walker, in “A Short History of Cumberland County,” written in 1952, related the story of how the stone got its name. Walker had discovered the native sandstone was an excellent lining for his lime kilns and used it continuously for that purpose. When a building boom hit Florida in the 1910s, builders contacted him for flagstone. He sent samples to Florida and wrote to the Tennessee Central Railway in Nashville so that he could determine freight charges.

C.S. Blackman with the railroad called and asked if there was flagstone in the area and requested samples for an architect. The architect, Henry Hibbs, was working on a chapel at Scarritt College and was interested in this new stone. Hibbs traveled to Crab Orchard and declared he’d found the stone he was looking for then asked what it was called.

According to the account, Walker told Hibbs it didn’t really have a name and asked him to name it. Hibbs said, “Let’s call it Crab Orchard Stone.”

That was one of the first projects that brought the stone attention, and Hibbs received national awards for his work on the chapel and associated building, all constructed from Tennessee Quartzite stone quarried in Cumberland County.

The dense stone is found in colors ranging from tan, buff, pink and variegated to blue and gray. The colors appear as lines and swirls. It’s impervious to moisture and doesn’t react to acid or fumes. Dirt and soot are easily washed away.

“There’s stone in other places, like India and Arkansas that’s similar, but the variations of color and the density of the stone is harder than other sandstone,” Rose said. “It can be used for flooring because it’s a harder stone.”

Rose has shipped the stone across the country and around the world, as well as to building projects right in Cumberland County. R.L. Rose was involved in providing stone for the original construction of the Crossville-Cumberland County Chamber of Commerce on Main St. When the Chamber outgrew its building in 2009 and began planning for an expansion, they wanted to keep the native stone and provide a cohesive exterior. Tennessee Building Stone supplied the stone for an addition and R.L. kept watch to ensure the new stone would complement the original structure.

A current project is Cemetery of the Resurrection in Staten Island. The last load was being prepared for shipping recently, bringing the total project to about 500 tons of Tennessee Quartzite stone.

“That’s been a big market up in that area,” Rose said of the New York, Staten Island, and New England region. “We work through dealers, but they’ve told us the stone is going to this mobster’s house or being used in this other mobster’s swimming pool. I don’t know if they were supposed to get better stone or what we were supposed to do, but they tell you that,” he added, laughing.

One customer had used the stone on his residence in New York and liked it so well he had stone shipped to Israel several years ago.

While the industry is seeing growth after the decline in the building and construction industry of the past few years, Rose acknowledged the stone is a luxury item and other factors such as fuel prices and freight charges affect the price. There’s also growing competition from imported stone and from stone found in local areas that don’t face added expense for shipping.

There are currently about a dozen employees of Tennessee Building Stone, though Rose noted there were many others that were contracted to the business for quarrying rock and the business supported other industries in the community, including trucking and transportation.

The stone is used in a variety of building applications, including swimming pool decks, pool coping, mantels, hearth stones, stacked stone walls, flooring, sills, step treads, wall veneers and for landscaping. It’s mostly found in residential settings due to the added cost; however, there are many examples of it on building buildings, including the Knoxville Airport which used the distinctive stone in a renovation of the terminal in 2000.

It’s also used in Rockefeller Plaza in New York around the area where the famous Christmas tree is displayed each year. It can be found at the Vice President’s mansion at the swimming pool.

The thickness of the stone determines its use in building, Rose explained. Stone two inches thick or less is used for flooring and flagging. This natural bed flooring can be cut into a six-inch multiple pattern while natural bed flagstone is broken into irregular shapes and sizes.

Rock that’s two inches to 10 inches thick comes with a split face veneer, similar to that found at the Crossville-Cumberland County Chamber of Commerce.

In addition to supplying the stone, the Rose family has also helped to keep that stone looking good. David and Sandra Rose’s daughters, Kelsey and Alison, used to have a summer job of cleaning the stone signs found in the community and repainting the engraved lettering, helping keep the signs looking sharp through the years.

Rose said a unique and enjoyable aspect of the business is the relationships and friendships formed with customers and dealers across the country.

“There’s people I’ve known for 30 years, and they always have something to tell,” Rose said. “We’ve been blessed in the stone business, and it’s been a great industry for others in the community, too, from the builders to the truckers to the people making pallets and selling the fuel.”

n A Salute to Industry series is a project of the Crossville-Cumberland County Chamber of Commerce to feature local industries and businesses.