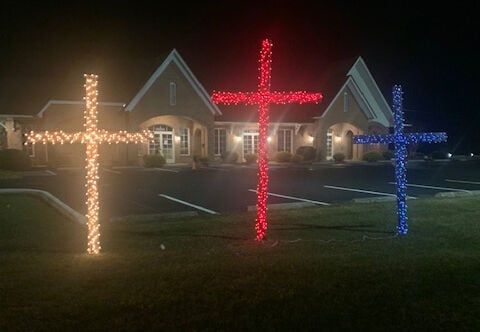 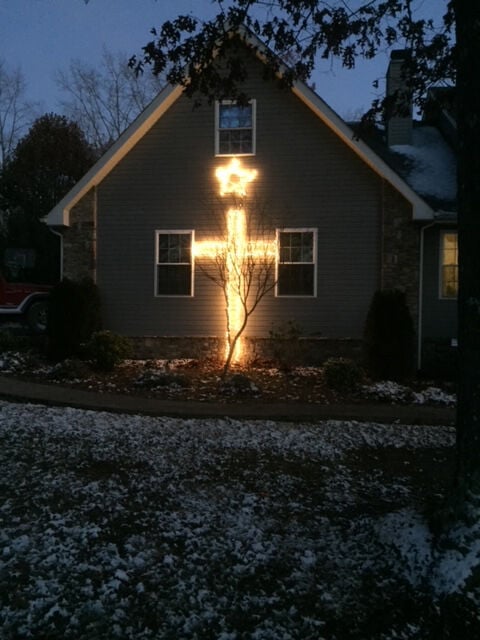 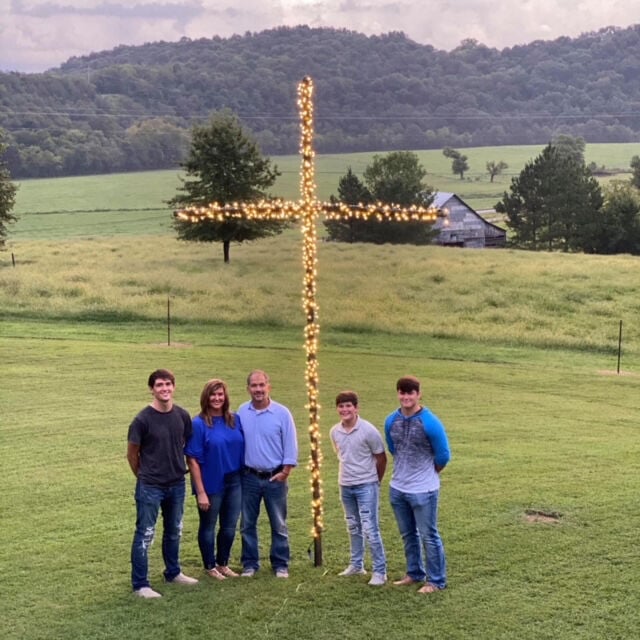 Robin Mullinax Underwood and Clete Underwood are pictured with their three sons and their lighted cross spurring the “aCross Tennessee” Ministry to keep Christ in Christmas.

Robin Mullinax Underwood and Clete Underwood are pictured with their three sons and their lighted cross spurring the “aCross Tennessee” Ministry to keep Christ in Christmas.

Jesus is the reason for the season, so Robin Mullinax Underwood and Clete Underwood ignited a ministry movement to put Christ back into Christmas by lighting crosses from Nov. 27-Dec. 31.

“My daddy is from Cumberland County so I grew up there,” Robin said. “That’s where my grandparents and all my aunts and uncles, which is the Mullinax family and the Welches, are from. A lot of my family lives up there. That’s sort of the second home where I grew up.”

Now in its third year, aCross Tennessee Cross Lighting Ministry has registered lit crosses spanning over 33 counties and covering every border of the Tennessee and five states.

“We’re very excited about the ministry,” she continued. “This is the third year and this year we went across Tennessee.

“We’re excited to see the crosses and Jesus. It’s just a reminder of what Christmas is all about.”

The ministry began as Robin saw Christmas lights adorning homes and yards, but none depicted the true meaning of Christmas. She had a vision for the ministry in late 2017.

“I think the world’s forgotten what Christmas is all about,” Robin said. “I thought, ‘You’re on little Sykes Rd. There is nothing in our little community that says this is the birth of the savior of the world.’ There was snowman, there was Grinches, there was lights and all the trees and shrubbery, but there was nothing that said, ‘This is about the birth of Jesus.’ So, it was laid upon my heart about a lighted cross.”

She told Clete that she wanted to do something and wanted for people to be able to drive along their road and see Jesus everywhere they look in hopes that they would see the crosses and be reminded why baby Jesus was born. She had the idea of putting up lighted crosses along the four-mile stretch of their road, Sykes Rd., in Smith County, TN. Clete called it “aCross Sykes” and their slogan was “from the manger to the cross, we celebrate the birth of our Savior– Jesus Christ.”

By 2018, they were ready for their first year. They started to raise awareness for the “aCross Ministry” movement. They created posters, went door-to-door and she made posts on her Facebook page.

That first year alone, they had over 30 crosses lit up along Sykes Rd.

“We had people driving along our road just to see the crosses from other counties,” she said. “It was amazing. You couldn’t drive and not be moved or be reminded it was Christmas and what Christmas was about.”

In 2019, the ministry was coming into its second year and the initiative had caught flame. Robin created a Facebook page for the ministry for it to have its own presence on social media. As more and more people heard about it, the more people began to message Robin about taking the ministry across Smith Co.

With so much interest, the ministry had outgrown its “aCross Sykes” namesake and became “aCross Smith County,” with over 1,200 registered lighted crosses, and even more in several other Tennessee counties and nine other states.

“I had people say, ‘Make it go across America. Make it go across Tennessee. Our world needs this.’ I told my husband, ‘If God wants us to do something more with it, He’ll provide a way.’ And I got a phone call out of the blue to be a guest speaker at Christian Day on Capital Hill.”

In early 2020, Robin spoke at the Christian Day on Capital Hill about the ministry, along with other dignitaries and guest speakers, such as Dr. Ming Wang.

“I thought this is our opportunity, because all the state dignitaries were there, to announce ‘aCross Tennessee.’ And we did,” she said.

This year, they were thrilled to have expanded to become “aCross Tennessee,” as more and more Tennessee counties joined in the ministry with a mission to “let your light shine for all to see the love of Christ this Christmas season.”

Farm Bureau Home & Land, Wilson Living Magazine and Tennessee Baptist Association and several newspapers have reached out about the ministry.

“We’re so thankful,” she said. “We do not have a budget. Everything that is done is done by us or a newspaper helping spread the word. So, we’ve been very blessed with people that’s supported this ministry.”

“The hardest thing is probably half the crosses are not registered,” she said. “That’s where it’s hard to get a true number. Like, last year we had 1,200 registered but there were way more than 1,200. In Smith Co., I will tell you to give you an idea of how many crosses there were, that’s one cross in every 6.3 homes. You’re talking about the most beautiful landscape you have ever seen to drive and you can’t look to a hill, you can’t look to a valley, a barn, you cannot look and not see a cross.”

She added that the sight is more moving than she would have imagined.

“I find myself sometimes driving down the road and just crying and praising him,” she said. “And I think, ‘If these crosses just allow the praises that I know they create in me, I can’t imagine.’ To me, it’s so worth even if it just reminds us to stop and praise Him.”

She keeps a running total of the crosses that are registered on the Facebook page with a coverage map. Robin suspects there’s more crosses than are registered this year as there have been in the past. She said some participants may not realize they need to register their crosses every year. Of those registered, she is certain most of them are the new crosses.

“It’s not about how many,” she said. “My goal is to spread the love of Christ and for Christians to unite. To me there’s been so much joy in seeing Christians uniting across the state. I think it gives us hope. It shows us the greatest love story ever told.”

Touching stories have reached Robin that have centered around the aCross Tennessee Ministry. Some participants have kept their lit crosses out through Easter and others even all year long. Some participants have reported people stopping to pray at the crosses. Others have said there are many driving in to see the crosses from all over the state. One story told to Robin was a little 8-year-old girl who’d been saved the year before. When she and her family were driving along to look at the crosses, she told her family that God spoke to her and told her she needed to be baptized and the crosses helped her listen.

“To me, this is what this ministry is all about,” she said.

She hopes, eventually, that this ministry will become the standard at Christmas and be a regular part of the season.

She said, “Our world needs hope right now and we need uniting. That cross unites. I think the cross is something we can all gather around.”

For more information about aCross Tennessee or to register a cross, visit the Facebook page at www.facebook.com/acrosstennessee and the website at www.aCrossTenn.com.