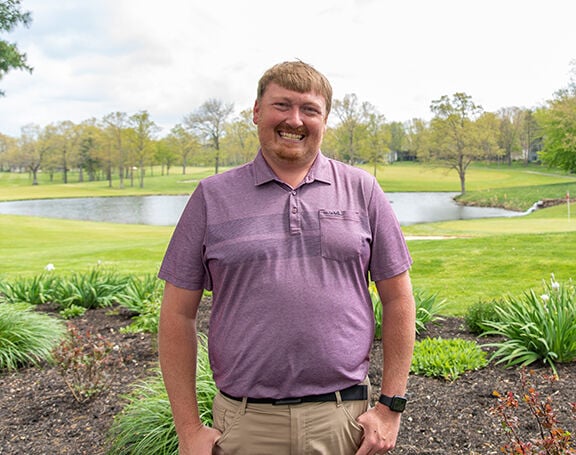 Corey Wade is excited about his new opportunity as vice principal with New Colossus Academy in Crossville. He’s been head golf pro at Stonehenge for 12 years. 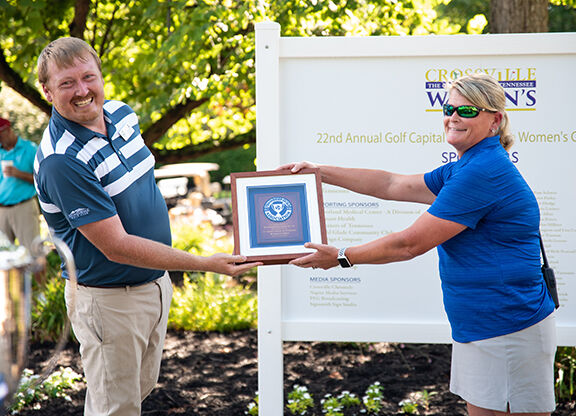 As head golf pro at Stonehenge Golf Club, Corey Wade has worked with prestigious tournaments. He accepts an honor here on behalf of the club from the Women’s Open in 2020.

Corey Wade is excited about his new opportunity as vice principal with New Colossus Academy in Crossville. He’s been head golf pro at Stonehenge for 12 years.

As head golf pro at Stonehenge Golf Club, Corey Wade has worked with prestigious tournaments. He accepts an honor here on behalf of the club from the Women’s Open in 2020.

A 12-year run in Fairfield Glade is coming to a  close this June, as Stonehenge head golf professional Corey Wade will be stepping away from the course to pursue a role with New Colossus Academy in Crossville.

“It’s bittersweet because the people here are so awesome,” Wade said. “I can’t talk enough about the pros and superintendents [in Fairfield]. I love my staff here, too. But it’s time for this transition, and I feel the Lord is calling me in a different role.”

At New Colossus, Wade will serve as vice principal.

“New Colossus Academy is a new school; we’re 1 year old and are taking the best parts of Christian education with STEM work and trying to reach kids with a great education.”

Wade’s love of Fairfield and Cumberland County makes the transition a little easier.

“It’s sad to leave Fairfield. But one of the reasons I’m excited to work at a new school here in town is I still get to be a part of this community,” he said.

“I know that this community can be a great resource, and I’m excited to be with the kids and families at New Colossus.”

Wade’s path to Fairfield Glade featured hard work on the golf course, a honeymoon trip and a little luck.

“I am originally from Plainville, GA, which is a small town of about 200 people in northwest Georgia,” he said. “We had a small nine-hole facility that I’d play on. They’d have to get the cows off the pasture in order for us to play.”

He continued, “I graduated from Bible college with a degree in biblical studies in 2009, and at that point I thought I was going to seminary. The Lord told me I needed to take a timeout to help out some hurting kids first.

“But I needed a job; so I applied all over the country and ended up here in Fairfield Glade as the assistant professional at Dorchester.”

Wade found himself in Fairfield Glade before his position at Dorchester, however.

“This is actually where me and my wife honeymooned when we were college students in Georgia,” he said. “We got married our junior year. We came to Fairfield for two weeks on a honeymoon, and never would’ve guessed we’d end up living here. We love this community, Fairfield and Crossville.

“This is God’s country right here.”

It was more than golf that drew the couple to Cumberland County.

“We wanted to go somewhere that we could do a lot on our honeymoon, with golf being a part of that. The hiking, lakes and everything that makes this place great, too, we wanted to come here because there’s just so much to do.”

After a stint at Dorchester, Wade’s position with Fairfield Golf shifted to Fairfield Blvd. and Stonehenge Golf Club in 2014, where he served as an assistant pro under now director of golf Jeff Houston.

Wade’s connection to Stonehenge extends beyond the course’s fantastic reputation.

“This place is awesome,” he said of Stonehenge. “The course is fantastic, and Sean VanHoose keeps it in immaculate condition. But what makes it awesome is the people. We’ve got 25 people on staff that work on the golf operations side, plus the maintenance staff that Shawn’s in charge of. They are incredible people from across the country and all successful in their fields before they retired and came to Fairfield.

“These people are what make this place great, all of our many residents.”

Wade added, “Being able to work with Jeff Houston, our director of golf, is big. He took me under his wing and showed me the ropes. Having all those awesome people surrounding you sets you up for success.”

Stonehenge is known for hosting top-tier tournaments, and the chance to work with those was a draw for Wade.

“The main reason I came over to Stonehenge from Dorchester was the tournaments,” he said, “the Tennessee Senior Open, the Women’s Open and the Parent-Child Championship. And to be able to work with the TGA staff for those has been unbelievable.”

Tournaments aren’t without their challenges, however.

“There are so many moving parts that take place in a tournament this size of what we host,” he said. “A lot of my experience is in organizing the 100-volunteer force for the Women’s Open. Fitting all the pieces of the puzzle together for that can be quite a challenge.

“Tournament weeks are why you get in the business,” Wade added. “We show up well before the sun’s even thinking about coming up and leave well after it’s set. But by putting in that work is the fun part. It feels inside like chaos, but the experience that the player gets is complete calm and enjoyment and a top-notch tournament.”

Wade’s faith has been a driving force during his time at Stonehenge.

“As a Christ follower, you cannot separate your faith from your actions,” he said. “To me, that has always made itself prevalent in trying to be a servant-leader. Jeff Houston set a really good example for me in that he was never afraid to do any job here. He would mow the range, wash carts, change trash– whatever was needed.

“I want to be a servant-leader as much as possible, which means I don’t want

to ask my staff to do anything that I won’t do. That hopefully has bled into the way that I function as the head professional here at Stonehenge. I got in the golf business because the Lord called me to minister to hurting kids, and it’s been fantastic,” he added.

“I have two biological children and three adopted from foster care. It’s been amazing being a part of the community in that way.

He continued, “It’s time to jump back into a ministry context and help kids in a different way.”

Mary Spangenberger, 99, of Crossville, passed away on June 15, 2021, at Standing Stone Care & Rehab Center in Monterey. She was born on April 25, 1922, in Erie, PA, daughter of Fredrick Zwack and Helen Whalen. She was of the Catholic faith. Mary worked multiple jobs at Eastman Kodak in R…

Kenneth "Ken" R. Hayes, 87, of Crossville, passed away peacefully at home on June 14, 2021. He was born on Feb. 8, 1934, in Knoxville, son of the late Horace Hayes and Avis (Seiber) Hayes. Ken worked as a truck driver during his career. He attended the Brown's Chapel Church of God. He is sur…

Some people only walk this earth for a short time. Their departure reminds us that angels are watching over us. Last week, Aggie Reed rejoined her heavenly family and gained her wings. Agnes Lee "Aggie" Wilson-Reed passed away unexpectedly in Cookeville on June 11, 2021, at the age of 83. Ag…