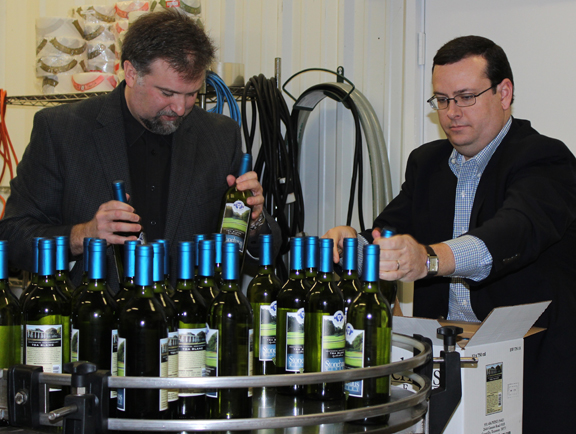 Rob Ramsey, Stonehaus owner, and Matt Vanderpool, executive director of TGA, box bottles of the new TGA Blanc wine, which Stonehaus developed for the golf association's centennial. The winery will return $1 of every bottle sold to the nonprofit association. 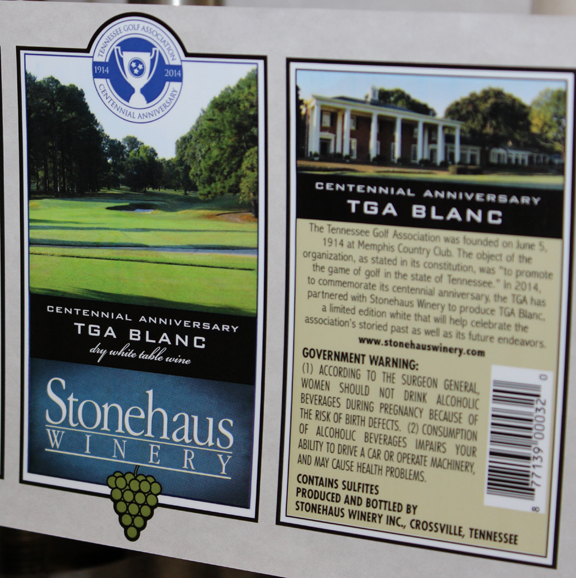 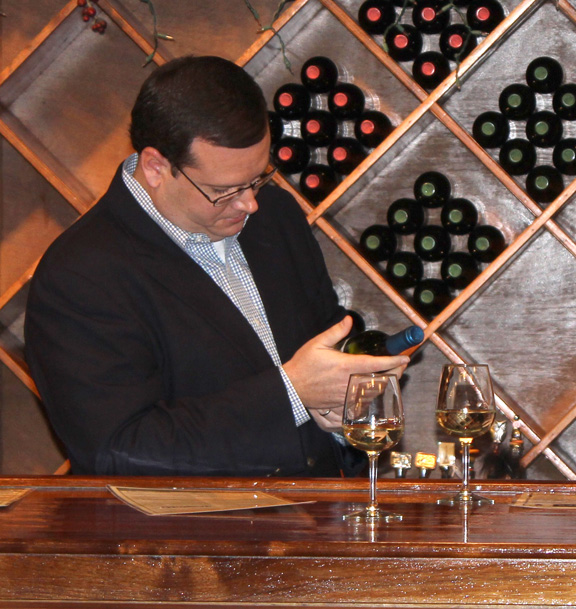 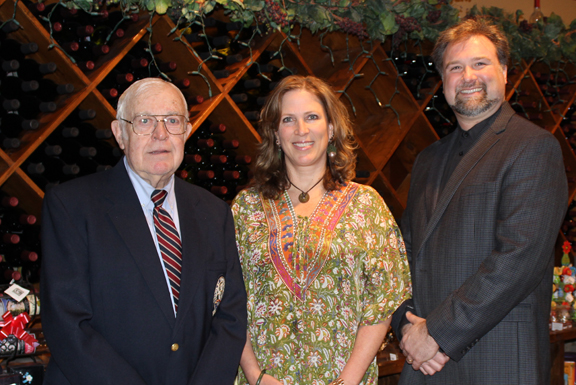 Rob Ramsey, Stonehaus owner, and Matt Vanderpool, executive director of TGA, box bottles of the new TGA Blanc wine, which Stonehaus developed for the golf association's centennial. The winery will return $1 of every bottle sold to the nonprofit association.

Stonehaus Winery of Crossville knew just what to get the Tennessee Golf Association for it's 100th birthday — a new wine variety to celebrate the association's centennial year.

TGA Blanc is now available at Stonehaus Winery, featuring Memphis Country Club on the label, where the association was formed June 5, 1914.

"As we explored different ways to celebrate our 100th anniversary, we wanted to do some golf-related activities and some non-golf-related activities," said Matt Vanderpool, executive director of TGA. "Rob was very gracious in agreeing to move forward to producing a commemorative wine for us to be able to have available to us. This was a wonderful opportunity for us to pursue something with a nice tie-in."

Rob Ramsey, owner of Stonehaus, said laughing, "They can celebrate their success and drown their defeats."

The partnership continues a strong relationship between Cumberland County, the Golf Capital of Tennessee, and the Tennessee Golf Association. Stonehenge Golf Course is the home of the Crossville Women's Open Championship and the Tennessee Senior State Open.

"It's a dandy wine," said Wheeler, who serves as a consultant to Stonehaus Winery and considered the grandfather of the state's wine industry, having stared the state's first licensed winery in 1980. "Jan used quite a few blends to come up with this wine. To me, it's just a great wine. It's well balanced. It has fruit. It has everything that a wine needs."

Nix said the semi-dry white wine would pair well with fish and chicken dishes, but that it also had enough acidity to go well with heartier dishes like cream-sauces with pasta.

"It was high in fruit, predominately grapefruit," explained Nix of the Vidal Blanc grapes. "Pairing that with the acid in the Vidal made you have this citrusy taste with a grapefruit finish."

The grapes used in the wine are about 90 percent Tennessee grapes, explained Rob Ramsey, who noted the winery always likes to use Tennessee-grown grapes as much as it can.

This new wine, the fourth new label presented by the winery in the past year, offers a distinctly regional flavor, Ramsey explained.

"This wine, using an American variety paired with a French-American hybrid, it makes it taste like the South," Ramsey said. "It brings our take on a semi-dry white wine."

Much of the grapes were produced at a micro-climate farm in Johnson City owned by Michael Reedy. Ramsey explained they were all very impressed with the quality of fruit produced by Reedy's operation, they released Reedy Creek Reserve Chardonnay.

Stonehaus supports the efforts of the Playhouse and the state parks by donating a portion of each bottle sold of those varieties to the respective non-profit organizations.

TGA Blanc will be no different, with $1 of each bottle to the TGA.

The TGA will serve the wine, and other featured Stonehaus varieties, at gala dinners set across the state leading up to the final dinner June 6 at Memphis Country Club, where the TGA began June 5, 1914.

One of the galas will be held April 18 at Cherokee Country Club in Knoxville.

The wine will be promoted to golf courses across the state and available at Stonehaus Winery or by calling the winery at 484-WINE. Ramsey hopes to offer online orders in the near future.

Lydia Ernestine Stevens, 87, of Crossville, passed away Wednesday, Jan. 20, 2021, at Cumberland House. She was born Sept. 11, 1933, in Crab Orchard, daughter of the late Lloyd Stevens and Rose Ann (Waldo) Stevens. Ernestine was a hotel owner and was a member of the Full Gospel Church. She is…

Charles "Buford" Sutton, 89, of Crossville, passed away Jan. 22, 2021. He was born Sept. 3, 1931, in Monterey, the son of John L. and Beulah R. Cook Sutton. He was a graduate of Monterey High School where he will remembered as a star athlete. He was retired after 34 years with the city of Cr…

Patricia A. McNeeley, 86, of Cookeville, went to be with her Lord and Savior on Jan. 21, 2021. She was born Oct. 13, 1934, in Whipple, WV. She was the daughter of Floyd A. and Mary Merritt. She was a devoted wife serving along with her husband Vertie W. McNeeley in the ministry with the Pent…