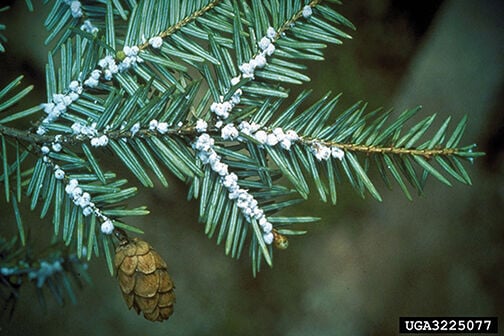 The hemlock wooly adelgid is so pervasive in Tennessee that a state Division of Forestry representative believes there is no way to eradicate it. 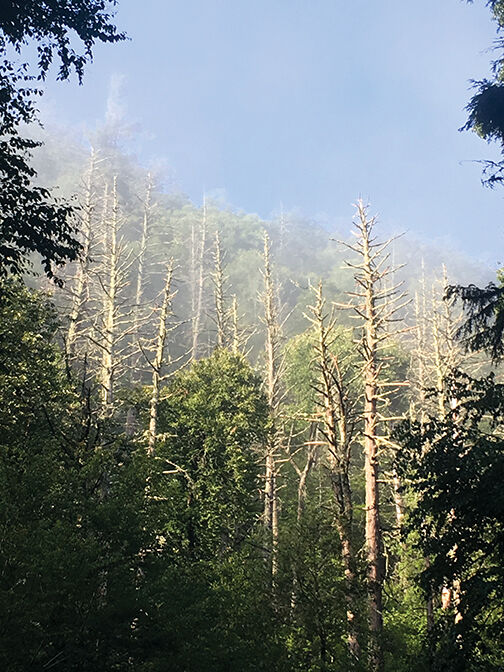 A group of dead hemlock trees in the Great Smoky Mountains National Park in 2017. The trees died almost certainly from infestation of the hemlock woolly adelgid, an invasive insect native to Japan.

The hemlock wooly adelgid is so pervasive in Tennessee that a state Division of Forestry representative believes there is no way to eradicate it.

A group of dead hemlock trees in the Great Smoky Mountains National Park in 2017. The trees died almost certainly from infestation of the hemlock woolly adelgid, an invasive insect native to Japan.

An invasive insect that infested eastern hemlock trees in Fairfield Glade several years ago is spreading through the area again but with greater force, prompting some residents and the Community Club to take action before the situation worsens.

An Aug. 18 email newsletter from the Environmental Committee of the Fairfield Glade Community Club informed property owners about various ways to treat their trees infested with the hemlock woolly adelgid.

Trees on common property are the responsibility of FGCC. The committee said the Community Club will treat those trees “as time and resources allow.”

The email newsletter followed a presentation by resident Ken Czajka, who went before the board in June to warn of the HWA problem. There are nearly 300 hemlock trees near his property of one and a third acres.

Czajka in 2014 led a FGCC committee that developed a plan to treat eastern hemlocks on 1,200 acres along streaming waters that best support that species of tree. He said the board had considered spending $10,000 a year for four years for that work.

He said he did not know if any of it was spent because the bitter cold early in both 2014 and 2015 helped to keep the HWA population in check.

In addition, in 2017 the shock from fluctuating Arctic blast deep-freeze temperatures interspersed with warm weather killed off as much as 80% of adult HWA in some areas, said Jackie Broeker, who heads a hemlock strike team of the Tennessee Division of Forestry.

But winters since then have been mild enough for many adult HWA to survive, she said. That is significant because one adult can produce 10,000 offspring in a year.

“We have been expecting the infestation level to get higher,” she said. “It has bounced back.”

The HWA has become so pervasive in Tennessee that Broeker believes there is no way to eradicate it.

“It is at a point where we just need to manage the situation,” she said.

The HWA, native to Asia, was first discovered in the U.S. in the 1920s and in East Tennessee in 2002. There now are infestations in at least 43 Tennessee counties, all in the eastern half of the state where eastern hemlocks are native.

When a hemlock is infected, its owner has for to 10 years to save it depending on its health, Broeker said. A tree that is treated is protected for five to eight years.

The most common weapon used against HWA is the insecticide imidacloprid, which typically is applied to the ground around a tree in a method called soil drench. The tree’s roots eventually take up the insecticide and transport it throughout the tree. The chemical also can be injected directly into the tree.

Licensed pesticides applicator Sue Scholl, a field biologist with Panther Creek Forestry in McMinnville, has been treating hemlocks for several years. She said requests for treatments have increased this year.

“The wave has finally hit us,” she said.

As an example, during a one-day trip to Fairfield Glade this summer, Scholl treated hemlocks for several property owners who scheduled appointments with her as a group. That enabled the property owners to share in the cost of her travel rate of $75 per hour — it was about a two-hour drive — rather than each one scheduling individual appointments that would require separate trips.

Property owners can treat their trees themselves, but they must follow U.S. Environmental Protection Agency regulations involving the amount of pesticides they apply and where.

Czajka, the Fairfield Glade property owner, said he treated about a dozen trees last year and 10 so far this year using the soil drench method.

Brad Canfield, the state’s Cumberland County forester, provides information to landowners who want to treat their trees themselves and conducts training sessions in groups. He can be reached at 931-484-4227 or william.canfield@tn.gov.

Whoever does the treatments, Scholl said landowners should act quickly because HWA infestations are likely to worsen after the adelgids come out of summer dormancy this fall.

“If we get the chemicals into the trees now, that will be a big help,” she said.

Entomologists such as research assistant professor Pat Parkman of the University of Tennessee in Knoxville have been working on another way to confront the HWA: through biological control; that is, releasing predators of the adelgid.

Parkman oversees the rearing of three species of beetles that survive and reproduce only on HWA. Beetles from the entomology and plant pathology laboratory he directs have been released in such places as Great Smoky Mountains National Park, Catoosa Wildlife Management Area and various other wooded areas north and south of Crossville along the Cumberland Plateau.

Although Parkman has been releasing beetles since 2007, he said it is too early to know the extent of their effectiveness, partly because beetles do not multiply as fast as the HWA.

Another approach is integrated pest management, which consists of any one or combination of techniques that might help landowners determine over time what works best for a specific problem and a specific area.

Czajka has been in communication with the FGCC’s Environmental Committee and expressed confidence that it will offer a good plan to save hemlocks.

“I think there is going to be a lot happening here in the Glade,” he said. “At least I have high hopes.”

Eastern hemlocks can live for more than 500 years, reach heights of more than 170 feet and are found mostly along streams and rivers. They can…