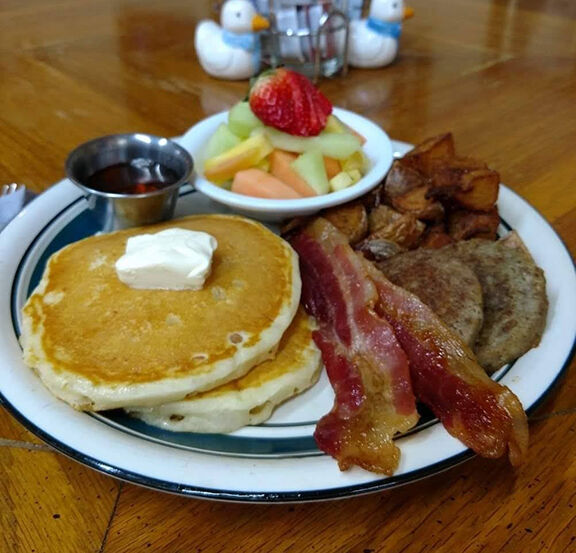 Much of the meat and produce served at Community Table, a Fairfield Glade restaurant, comes from two area farms. Customers say they can taste the difference. 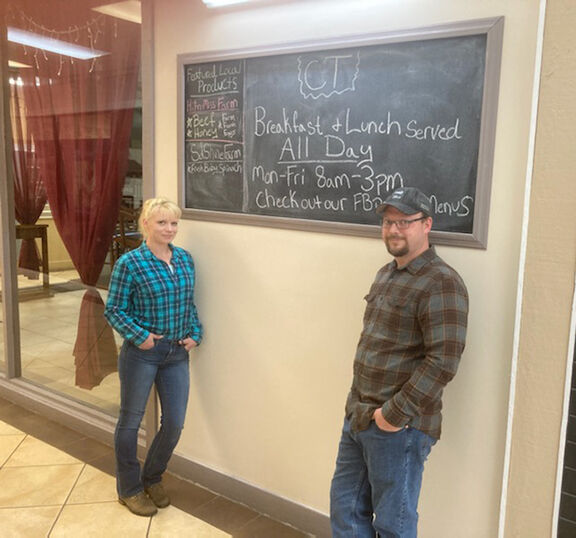 Samantha Bond and Neil Archibald own Community Table, which they opened in April 2020.

Much of the meat and produce served at Community Table, a Fairfield Glade restaurant, comes from two area farms. Customers say they can taste the difference.

Samantha Bond and Neil Archibald own Community Table, which they opened in April 2020.

Community Table in Fairfield Glade features an eclectic menu including stacked sandwiches that would make Dagwood Bumstead of Blondie fame salivate and a New England clam chowder from an early 1900s recipe that the Boston Red Sox would likely declare a hit.

The cozy eatery, befitting its name, reflects community. Ownership expands on that by buying local as much as possible and making a minimal impact on the environment through the use of recycled products.

Located in the Village Green Mall, the restaurant occupies a building that previously housed a Mexican eatery.

Owned by partners Neil Archibald and Samantha Bond, it is open during the week for breakfast and lunch. They also offer a dinner component, started serving on Sundays in May, and feature, on certain days, theme meals with an international flavor.

In February, for example, the restaurant had Dinner in Dublin with such Irish staples as shepherd’s pie and cabbage.

The Community Table opened in April 2020, shortly before the governor closed restaurant dining due to the pandemic.

“No one wanted to go anywhere,” said Bond, a native New Yorker. “We offered free delivery for two months and had only a dozen deliveries. We struggled for six months.”

With COVID-19 restrictions being lifted, business has picked up. Archibald said it’s 50-50 as far as dining and carryout.

He and Bond have 40 years of combined experience in the food and beverage industry. They decided to put that experience to work by opening a restaurant that wasn’t part of a chain and was strongly connected to the Fairfield Glade community.

“We wanted to start a new journey together,” said Archibald, who met Bond locally in 2015 before they moved to Colorado. “Fairfield Glade is a good place to start it. We wanted a community-based restaurant.”

Much of their meat and produce come from two area farms. Since some of it is seasonal, they also buy from farms in other states.

The common denominator is fresh off the farm.

“There’s a significant difference in the taste between factory and farm,” Bond said. “It tastes healthy, not the processed taste. We pay premium prices for all of these. We’re small and local and want to see others succeed as much as we do. Locals need to help locals.”

Reflecting that philosophy, they’ve established a business connection between Hit-n-Miss Farm in Crossville and Solshine Farm in Pikeville.

Hit-n-Miss is owned by Kenny Carey, who has known Archibald for some dozen years and considers the couple good friends. They joined up after Archibald reached out to Carey when Community Table opened.

The Crossville farm provides the restaurant with ground beef, New York strip steak, farm fresh brown eggs and, when in season, tomatoes,  green onions, squash and zucchini. Carey said his beef is 100% farm raised and doesn’t have any added hormones or antibiotics, while he puts minimal liquid sprays on his vegetables.

Carey has several restaurant customers in Crossville. They make up about 25-30% of his sales.

“We work great with Neil and the other restaurants,”said Carey, who sells everything locally. “It helps the small farmer a bit.”

Archibald, who does most of the food preparation, continues the healthy approach by making the majority of their dishes from scratch and using minimal salt and sugar and no preservatives. For example, there’s a blue cheese and walnut salad topped by a vinaigrette dressing, all of which are made in house.

The partners are committed to not adding to the restaurant waste they’ve seen throughout their years in the industry. They use recycled sugar cane for to-go containers and coffee cups and agave straws. Each week, several hundred pounds of compostable food waste goes to local pig farmers.

“We’re trying to minimize the impact of the restaurant on the environment. We’re striving for 100% biodegradable and compostable.”

Though raised by a chef and having many years of experience in the food and beverage industry, this is Archibald’s first cooking job.

Based on the reviews, he has all the ingredients to excel in the kitchen.

Fairfield Glade residents Jim and Terry Meara are regular patrons, most frequently going there for breakfast. Jim described Neil and Samantha as good folks —  about as friendly and nice a couple you can find. He added that Archibald is a great chef, and Bond is excellent with customers.

Jim is equally effusive in his praise of the menu.

“They have great food,” he said. “My wife loves the avocado toast. With the eggs and bacon, there’s no comparison to what you get at the grocery store. The difference is remarkable.”

Eric and Caren Nelson of Fairfield Glade are likewise sold on the Community Table. Caren said they love the atmosphere and the super friendliness of Archibald and Bond.

The menu gets equally high marks.

“It’s nice to have a lunch that’s not fried,” Caren said. “You can eat healthy. They don’t oversalt things. The burgers are amazing, and the new breakfast is awesome. They have excellent soup. My husband buys the clam chowder by the quart.”

Stanley Roger York, 70, of Crossville, passed away on Thursday, July 22, 2021, in Putnam County. Roger was born on Jan. 20, 1951, to the late Stanley and Gladys Jones York. His parents and his siblings, Eugene York, John York and Linda Tollett, all predeceased him. His daughter-in-law, Nelda…

Fern Miller, 71, of Crossville, passed away July 21, 2021, at Cumberland Medical Center. She was born Feb. 1, 1950, in Crossville, daughter of the late Roy Vanwinkle and Nella (Brewer) Vanwinkle. She worked as a beautician and was of the Christian faith. She is survived by her sons, David A.…