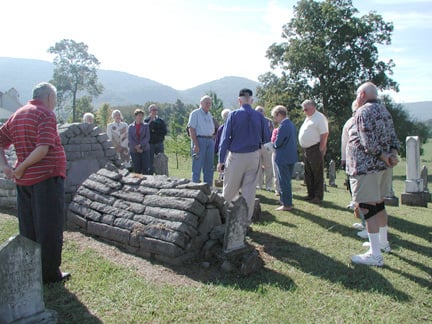 Tommy Swafford digs up family history at the Swafford Cemetery for the Fairfield Glade Historical Society. 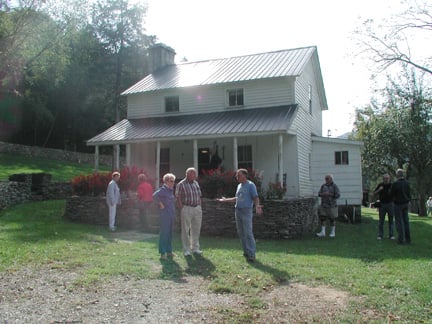 The bus made a stop at the preserved home of Greenberry Wilson, who is thought to be the first white settler in the north end of the Sequatchie Valley. Today the homeplace is preserved by a descendant, Lindel Agee.

Tommy Swafford digs up family history at the Swafford Cemetery for the Fairfield Glade Historical Society.

The bus made a stop at the preserved home of Greenberry Wilson, who is thought to be the first white settler in the north end of the Sequatchie Valley. Today the homeplace is preserved by a descendant, Lindel Agee.

In one of their last excursions of 2006, the Fairfield Glade Historical Society got on the bus and headed out to discover a bit of local history. They had heard of something called the Swafford-Tollett Feud that took place in the northern end of the Sequatchie Valley, which begins at the head of the Sequatchie River in Cumberland County and moseys along through Bledsoe, Sequatchie and Marion counties, a total of 75 miles. As the bus descended the thousand feet off the Plateau to the valley floor, Thomas V. Swafford, the author of The Swafford-Tollett Feud, rolled back a couple of centuries of time to give travelers a view of the valley's settlement and what the Civil War did to upset law and order there for the next 70 years. It was 1806 when John Tollet, Sr.'s large family moved into the valley. They were from Virginia. Eight Swafford brothers arrived from South Carolina around 1810. During the next 50 years, they farmed, became merchants, established churches, ran for public office, built homes and raised children. Some of the Swafford brothers traveled on to other states, but all who stayed prospered. The Swafford-Tollett feud is thought to have begun during the Civil War, in 1863. It was a time of deeply divided loyalties between the North and the South, and those loyalties skipped from household to household in the valley. It was not uncommon for gangs of one leaning or the other to raid the other side for whatever they could. After all, these were hard times when it came to food, goods, money and charity. The Union and Confederate armies were routinely living off whatever they could find in the homes, barns and fields of valley residents, and it soon became clear the Tolletts were Confederate sympathizers and the Swaffords leaned to the Union. It was believed around the area that John Tollett Jr., 72, who owned at least 10,000 acres of land in the valley, had a large amount of cash, either on his person or hidden somewhere. He was a perfect target. The evening of April 30, 1863, John Jr., along with a visitor to his home, "Old Man" Monday, were killed by a band of renegades seeking the cash. The victims were first tortured in an effort to make them reveal where the cash was and, in the process, killed. It was particularly gruesome. One of the gang of robber-murders was thought to be Aaron Swafford. The murderous incident set off an enduring hatred and a string of bloody events between the two families. The most famous of the incidents involved the election day shooting at Old Hall in Melvine on Nov. 8, 1892 when both families were determined to collect the vote of Jesse Swafford for their presidential candidate. Jesse was related to both the Republican Swaffords and the Democrat Tollets. After swiping Jesse from Tollet territory overnight, the Swaffords got to town first on election day. As they were leaving the polling place, the Tolletts came riding in, fully armed and looking for revenge. After the shooting stopped, the dead included both Aaron "A" Swafford and his son, James. Two other Swafford sons, John and Bill, were shot as were their nephew, Golia, and a bystander, Jim Walker. The only Tollett injured was Mose, who was stabbed repeatedly by one of the Swaffords vainly trying to defend his family. To add insult to murder for the Swaffords, Democrat Grover Cleveland won the presidency over Republican Benjamin Harrison. Today, most of the towns and buildings where the colorful and bloody activities of the Swafford-Tollett feud took place are gone. All that remains in the slumbering, peaceful valley with its thousand foot walls and trickling streams are the tales of a once-violent past everyone hopes is buried forever. If you would like more information regarding the Swafford-Tollett Feud or to purchase a copy of Thomas V. Swafford's latest book, The Swafford-Tollett Feud, you may contact him by mail at Route 6, Box 1080, Pikeville, TN 37367 or e-mail him at tomswafford@bledsoe.net. For information regarding the 2007 season for the Fairfield Glade Historical Society, contact Don or Joann Howells, 484-4964.

Clara Frances Kindrick, 82, was born on Nov. 20, 1938, to Robert and Minnie Clark Davis in Harriman. She passed away on April 16, 2021. She loved going to church and traveling to Pigeon Forge. She also enjoyed working crossword puzzles and watching WWE wrestling. She is survived by her child…

Alfred (Al) C. Heine Jr., 75, of Crossville, passed away April 14, 2021. He was born Feb. 8, 1946, in Ridgewood, NJ, the son of the late Alfred C. Heine Sr. and Alice B. Heine and worked as a mechanical engineer in New York and North Carolina before his retirement to Fairfield Glade. Al is s…