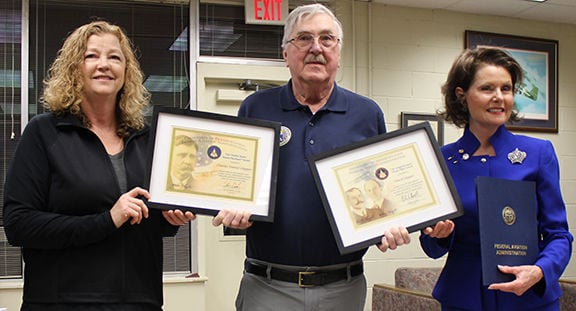 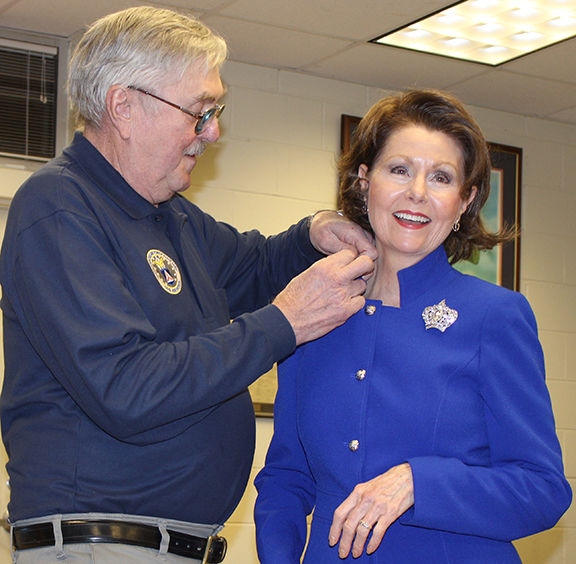 Chuck Clapper places an appreciation pin from the FAA on his wife, Connie.

Chuck Clapper places an appreciation pin from the FAA on his wife, Connie.

The award honors the lifetime accomplishments of senior aviation mechanics who have had 50 years of accredited aviation maintenance. It is named for the maintenance man for the Wright Brothers.

Clapper was previously recognized as a Wright Brothers Award recipient. This award is presented by the FAA to pilots who have 50 years of incident- and accident-free flying.

“It’s not very often someone receives both of these awards. Normally, only about one out of every 10 who get the Wright Brothers Award also obtain the Charles Taylor Master Mechanic Award. On behalf of the Federal Aviation Administration, I’m thrilled to present you with the award,” Pam Charles of the FAA said.

Clapper said, “This really is an honor and I’m happy I was able to earn this,” Clapper said. “Everyone’s support means a lot to me.”

His wife, Connie Clapper, who is also a pilot, received a pin and certificate for her years of support to Chuck.

Chuck said, “In my early days of flying, if you were a pilot and flying a small plane you really needed to know how to work on it in case there were any problems. I made sure I knew how to fix everything I could.”

Charles said the Clappers were among the last two honored with the award to receive pins because the FAA is no longer issuing pins for the awards.

The group celebrated after the presentation with a cake, snacks and beverages.

Anyone who interested in joining the Civil Air Patrol Squadron is encouraged to attend one of the meetings, at 6 p.m. on the the second and fourth Thursday of each month at Crossville Municipal Airport.

Potential members do not have to be a pilot or have prior military experience to join.