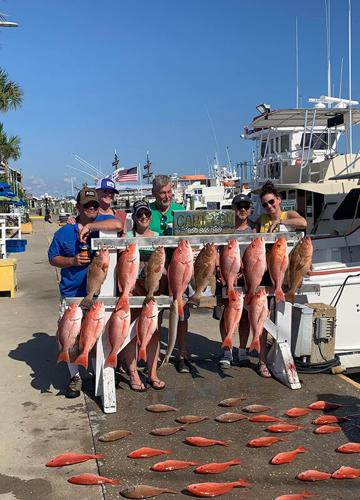 It’s the super group(er)! The mix-matched family members stand proudly together with their catch of grouper, tilefish, and vermillion, red and white snapper at Panama City Beach, FL. 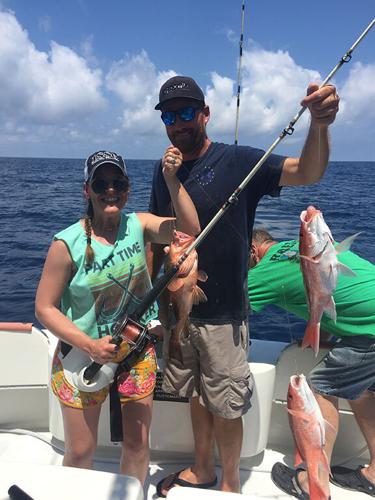 Rebekah Beeler reels in her first-ever grouper and two red snapper on the same cast and gets a hand from deckhand Bubba Lee to help hold them all up. It is a memory she will cherish forever and it wouldn’t have been possible without the family. 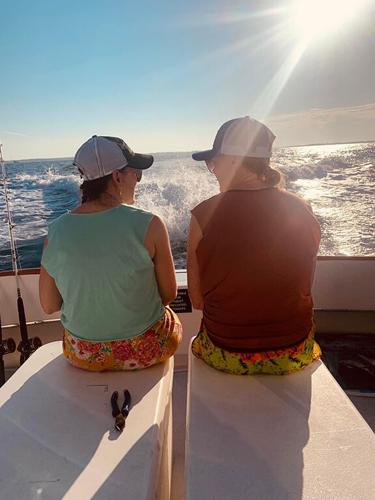 Sisters from different misters, Rebekah Beeler and Sherrill Rhea have been best friends since junior high, sharing more life together than apart.

It’s the super group(er)! The mix-matched family members stand proudly together with their catch of grouper, tilefish, and vermillion, red and white snapper at Panama City Beach, FL.

Rebekah Beeler reels in her first-ever grouper and two red snapper on the same cast and gets a hand from deckhand Bubba Lee to help hold them all up. It is a memory she will cherish forever and it wouldn’t have been possible without the family.

Sisters from different misters, Rebekah Beeler and Sherrill Rhea have been best friends since junior high, sharing more life together than apart.

They say sharing DNA doesn’t make you family, love does.

And they are right.

All three of them used to work for a man named Tama at his Japanese restaurant in college. He’s basically everybody’s favorite Asian uncle who puts those TV chefs to shame as he cooks these amazing 5-star meals for us and always packs a snack bag the grandkids would envy.

Then there’s Daddy, the sisters’ sweet father who practically adopted me in the eighth grade.

We’re not all related, but we’re family. Love does that.

The running joke is that they love my husband so much they continue to tolerate me. I laugh when they say as much, but really I don’t blame them a bit. I would, too, if I were them.

So, it’s Daddy’s birthday week and what does he want? He wants the family to go deep sea fishing with him in Panama City Beach. It’s tradition.

I overpacked and met up with bestie, little sis and brother-in-law, then we headed south in two weighted vehicles where we met up with Asian uncle to go fishing with Daddy.

I got to go with them four years ago on an overnight charter. It was a big boat with a bunch of other people.

This time, it was exceedingly more pleasant since we did a day-long private charter with Capt. John Law.

Daddy was familiar with Capt. Law, having chartered several fishing trips with him throughout the summer over the last couple of years. They had become friends, and the captain always took extra care to make sure he had a good trip.

A little ways off the coast, the captain stopped to put us to work catching our live bait. Our fishing poles were readied like straight trap lines, four hooks with iridescent lures worn like pendants on a vertical necklace.

It was exciting dropping the weight into the water and bobbing the pole before reeling it back in to find all four hooks were occupied.

We reeled in enough bait for the live well and headed out well past the point where we could see land on the horizon.

It was a beautiful day, perfect for fishing; hot but with a steady cooling breeze.

When we could see nothing but the Gulf all around us, it was just us and the fishes and the water, and it was time to wet our lines.

Our deckhand, Bubba, was very encouraging as he’d keep our hooks baited and attempted to keep us from tangling and catching each other, all while keeping count of the fish we’d brought in to make sure we caught our limit.

When we’d pull in our catch, Capt. John Law would holler out what it was.

As the family reeled in some beauties, I felt this unexpected massive tug on my line and had to hold steady.

I tried to reel in but we were fishing at about 1,000 feet, and it felt like I was flossing the water with a ton of bricks.

I’m not going to lie — I fought and struggled with it. It was just about to the point when I couldn’t hardly reel anymore because the line was so tight.

Finally, I saw sparkles of scales in the deep dark of the water. I saw hope (and dinner) at the end of my line.

They were beginning to surface and as I pulled up it just seemed to get heavier.

I reeled as much as I could and when I lifted the pole, the fish broke water and lo and behold, and much to my great surprise, there were two red snappers on my line along with a big, bug-eyed grouper bringing up the rear.

I couldn’t believe it. I could barely lift the pole to swing them in the boat, and Bubba came to help.

I was super grouper proud.

It was my first-ever grouper, with the added bonus of the two snappers. I was just tickled silly, and somewhat exhausted.

Bubba helped me hold them up as the captain hollered for a family member to “snapper” a photo. (See what I did there?)

Everybody was busy reeling in their catch, and we all got some awesome fish.

Sherrie joked that she and Tama typically feed the fish with their bait on one side of the boat so that the family members on the other side can do the catching.

But that day they both reeled in some good looking fish. Sherrie got a big ole grouper, too. We were all cheering for each other, when Sherrill pulled in a long fish that looked like an eel’s better-looking cousin.

Most of us had never seen or heard of that fish before. Apparently, the “slippery dick” is a common name for the sand tilefish.

Several of us, including the captain, had their picture taken with it when we got back to the dock.

Daddy, the most seasoned fisherman of us all by far, caught some seriously good gets. What we didn’t catch, he surely did. He always brings in more than anyone.

I pulled in several vermilion snappers and three white snappers, also new to me. I also pulled in a trigger fish but their fishing season ended when red snapper season began, so we threw him back.

Y’all, it was just the neatest.

I got in a few fights with some sharks, too.

That was very new for me. The first time I thought I had got another big catch but by the time the hooks surfaced, the top hook was missing. I still had a vermilion snapper on the second hook so it wasn’t a total loss.

I baited and cast again and got another hit on my line. I thought I was bringing in a big boy when something took my line and ran.

No matter how hard I reeled in, whatever had my line kept going. I tried my best to keep reeling to slow it down and maybe tire it out.

It was pulling me so hard I had an inkling I was going to be flung out of the boat to sleep with the fishes. I was fighting a losing battle.

I yelled for Bubba, “It just keeps going! What do I do?”

Busily helping the other anglers, he yelled back, “Just hang on to it!”

My guess is Bubba already knew it was a shark and would have to cut the line loose because there was no getting it back.

I leaned into my center of gravity and held onto the fishing pole with a death grip, reeling in what little I could.

I supposed standard practice is let the line and don’t lose the pole. It kind of makes me wonder how many anglers did lose the captain’s fishing pole.

Eventually, the captain hollered for Bubba to save me.

“Bubba, go help her. She’s been hanging on for a while,” he instructed. Bubba grabbed the line and cut it. I was so relieved. Then the captain said to me, “Thank you for hanging on and not losing my pole.”

Well-played, sharky, but, you didn’t get the pole or pull me into the water. I will live to fish another day and you have a lip ring to remember me by.

We went out for Daddy’s birthday dinner a few days later at Dat Cajun Place, and bestie told me that Daddy told Capt. Law I was his adopted daughter when he explained who we all were in relation to him.

It wasn’t a big secret or anything. I’d always felt that way, and they always treated me like one of their own.

But, still, to hear that’s how he describes his extra gal — the one with the big mouth, isn’t shy, is always bouncing off the walls and breaking the rules — it just reaffirmed they are my family and made me feel that much more loved.

I sat by Daddy grinning like a mule eating sawbriars and said, “I hear-tell you adopted me.”

He looked back at me and said, “Oh, I did that a long time ago.”

Our family is this super group(er) of people who enjoy being together.

We are a village.

We have history, can laugh at our memories while making new ones, sling around our inside jokes and just enjoy time well spent, whether it be fishing, a campfire, a cookout, dinner, birthdays, milestones, a UT football game or floating down a river.

Together — that’s what makes us family.

And whatever else it is that I can do with my time in this world, I know I have family.

Rebekah Beeler is editor of the Glade Sun. She can be reached at rbohannon@crossville-chronicle.com and 931-484-5145.